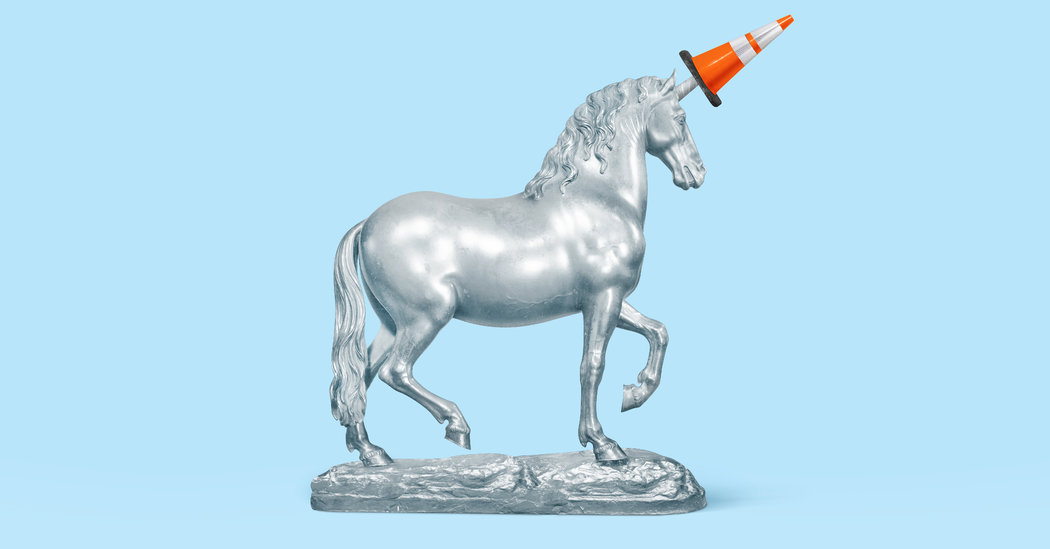 SAN FRANCISCO — Fred Wilson, a venture capitalist at Union Square Ventures, recently published a blog post titled “The Great Public Market Reckoning.” In it, he argued that the narrative that had driven start-up hype and valuations for the last decade was now falling apart.

His post quickly ricocheted across Silicon Valley. Other venture capitalists, including Bill Gurley of Benchmark and Brad Feld of Foundry Group, soon weighed in with their own warnings about fiscal responsibility.

At some start-ups, entrepreneurs began behaving more cautiously. Travis VanderZanden, chief executive of the scooter start-up Bird, declared at a tech conference in San Francisco last week that his company was now focused on profit and not growth. “The challenge is to try to stay disciplined,” he said.

The moves all point to a new gospel that is starting to spread in start-up land. For the last decade, young tech companies were fueled by a wave of venture capital-funded excess, which encouraged fast growth above all else. But now some investors and start-ups are beginning to rethink that mantra and instead invoke turning a profit and generating “positive unit economics” as their new priorities.

The nascent change is being driven by the stumbles of some high-profile “unicorns” — the start-ups that were valued at $1 billion and above in the private markets — just as they reached the stock market.

The most visible of those was the office rental start-up WeWork, which dramatically ousted its chief executive and withdrew its initial public offering last month. At the same time, shares of Peloton, a fitness start-up, and SmileDirectClub, an online orthodontics company, immediately cratered after the companies went public. And Uber, Lyft and Slack — which also listed their stocks this year — have similarly dealt with falling stock prices for months.

The lackluster performances have raised questions about Silicon Valley’s start-up formula of spending lots of money to grow at the expense of profits. (All of those companies lose money.) Public market investors, it seemed, just weren’t having it.

“A lot of these highly valued companies have run into the buzz saw of Wall Street, where they’re questioning or reminding us that profitability matters,” said Patricia Nakache, a partner at Trinity Ventures, a Silicon Valley venture capital firm.

She added that she anticipated a “ripple effect” on private start-up valuations that would start with the largest, most valuable companies and trickle down to the smaller, younger ones.

For start-ups and investors that were used to heady times and big spending, that means it may be time for a reset.

Aileen Lee, an investor at Cowboy Ventures, a venture capital firm in Palo Alto, Calif., said she considered dusting off a four-year-old “winter is coming” email she had sent to start-ups in 2015, telling them to prepare for a downturn. She hasn’t revived the warning yet, she said, because “I worry about becoming the boy who cried wolf.”

Other venture capitalists are being more forward. At Eniac Ventures, a venture firm in New York and San Francisco, the partners recently combed through their companies and identified the “gross margins” — a measure of profitability — for each one, said Nihal Mehta, general partner of the firm. This was not something the firm regularly looked at, he said, but they were inspired by Mr. Wilson’s cautionary blog post.

They ultimately decided that in future meetings with entrepreneurs, they would push for more detailed financial models, even though the companies are very young, Mr. Mehta said. While Eniac had looked at this when making investments before, “now it’s more important,” he said.

Tech start-ups have long gone through different cycles of fear and loathing. When the 2008 recession began, Sequoia Capital, one of the highest-profile venture firms, called a mass meeting with its start-ups and presented a slide deck titled “R.I.P. Good Times” that featured a graphic of a “death spiral” and a skull.

The event was intended as a way to shock the start-ups into reining in costs to survive the downturn. Sequoia’s presentation quickly became the talk of Silicon Valley, which did not fall into as deep an economic funk as other parts of the United States.

Yet other alarms about the state of the start-up economy fell on deaf ears.

In 2015, as unicorn start-ups sucked in billions of dollars in funding and soared to stratospheric valuations, Mr. Gurley of Benchmark bemoaned “the complete absence of fear” in Silicon Valley and said “dead unicorns” would soon appear. In 2016, Jim Breyer, a venture capitalist who was an early Facebook investor, also predicted “blood in the water” for the unicorns.

But the money continued to flood into tech start-ups from overseas investors, private equity firms, corporations, and SoftBank’s behemoth Vision Fund. That allowed founders to command higher valuations and delay going public. By the end of 2018, start-ups in the United States had raised a record $131 billion in venture funding, surpassing the amount collected during the late 1990s dot-com boom, according to Pitchbook and the National Venture Capital Association.

Mr. Gurley gave up on his warnings of excess. “You have to adjust to reality and play the game on the field,” he said in an interview last year.

(Complaining about high valuations is a longstanding pastime among venture capitalists, of course, since most prefer to invest their money in cheaply priced start-ups rather than expensive ones.)

This year, the warnings are being revived. In his recent blog post, Mr. Wilson wrote that many of today’s start-ups are focused on traditional physical industries like real estate, exercise or transportation. They should not command the high valuations that pure software companies — which tend to have less overhead — have, he wrote.

In several message exchanges, Mr. Wilson said he has already seen that as criticism of WeWork mounted over the last month, some start-up fundings were taking place at lower valuations and with stricter terms than the companies had hoped for.

“What I would like to see is a bit more rationality and I’m hopeful we are going to get it,” he said.

By last week, his words appeared to be sinking in elsewhere.

Postmates, a food delivery start-up that confidentially filed to go public in February, attended the confab. The company has not yet gone public because the markets have been “choppy when it comes to growth companies,” said Bastian Lehmann, Postmates’ chief executive, at the event.

Bird, the scooter start-up, announced $275 million in fresh funding at the conference. But its chief executive, Mr. VanderZanden, said he was only able to raise that money because his unprofitable company had taken steps this year to shore up its losses. Many scooter companies have lost their shine this year because of regulatory pushback and safety issues.

The shift toward making a profit wasn’t easy, Mr. VanderZanden said. “I’m an ex-growth guy and sometimes it’s painful for me,” he said.

But spending fast to grow fast was just no longer feasible, he added. It is now difficult for “a growth at-all-costs company burning hundreds of millions of dollars with negative unit economics” to get funding, he said. “This is going to be a healthy reset for the tech industry.”