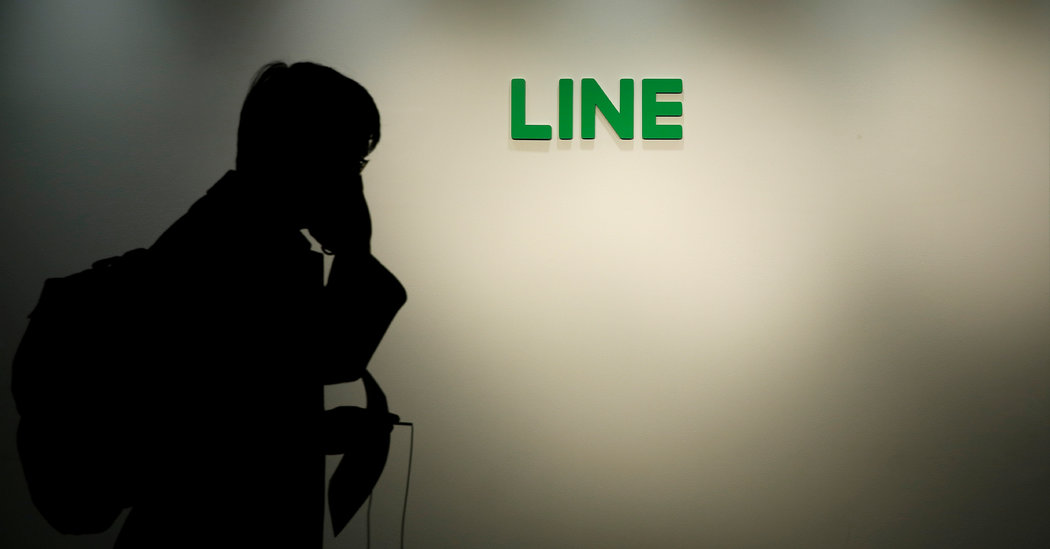 TOKYO — Two weeks ago, SoftBank Group of Japan announced it had lost billions on soured investments in some of the world’s biggest tech start-ups. On Monday, it said it was ready to roll the dice again.

The company announced an agreement to merge its subsidiary, Yahoo Japan, with Line, a dominant messaging app company, to create a Japanese internet goliath that would be able to compete against bigger and better-financed tech firms in the United States and China.

SoftBank and Naver, the South Korean company that owns a majority stake in Line, said Monday they had reached a memorandum of understanding to take the messaging company private as the first step in a complex financial arrangement that would result in Yahoo Japan and Line being held by Z Holdings, the publicly listed company that currently operates Yahoo Japan.

The combination would bring together two prominent companies in Japan that have seen better days. Yahoo Japan, formed in 1996 as a joint venture with Yahoo, offers a range of services including online shopping and news, but has struggled to make the move from desktops to mobile phones.

Line offers a dominant chat app in Japan, with 82 million domestic users, but has struggled to expand its user base. It fell into the red last year and has continued to book losses.

Speaking at a news conference in Tokyo on Monday, executives of Z Holdings and Line said the merger would help make Japan more competitive globally in the industries of the future.

The tech world is becoming “winner take all,” said Line’s chief executive, Takeshi Idezawa, who noted that the leading global companies were developing monopolies on everything from human resources to finance.

Competitors’ “strengths are growing even stronger, and the gap between those companies and the rest is widening,” he said. “As every industry becomes increasingly digital, the effect of that on national power and cultural diversity is an important issue.”

The deal requires approval from shareholders and government regulators, who are likely to give close scrutiny to a linkup of two of Japan’s most powerful internet firms. The companies said they plan to complete the merger by next October.

As a first step, Z Holdings and Naver are considering an offer to Line’s minority shareholders of 5,200 yen, or $47.78, per share. At that price, each firm would spend over $1.5 billion on the transaction.

By adding Line to its portfolio, SoftBank would get access to the messaging service’s users in Japan, and tens of millions more elsewhere in Asia, including Thailand, Taiwan and Indonesia.

In theory, that would allow the companies to merge their various offerings to create a super app that could serve as a gateway to all of their services. It also sets SoftBank up to cement its control over Japan’s small but growing mobile payment industry by combining its company PayPay, which currently leads the market, with Line’s own service, Line Pay.

The merger would come just as the Japanese government is pushing to move the country away from its stubborn attachment to cash.

Analysts and investors hailed the deal. “There are a lot of synergies,” said Mitsunobu Tsuruo, an analyst at Citigroup Global Markets Japan.

“Line is the strongest messaging company, and Yahoo is a strong domestic media company. There are very few overlapping areas,” he added.

Those synergies will be critical if the companies hope to stay competitive in their domestic market.

Line had one of the biggest public offerings of 2016, with investors flocking to the company based on its high revenue from advertising and sales of digital cartoon stickers that users can send to their friends.

The illustrations, which cost a little over $2, include Disney characters and Line’s own mascots, which have become popular enough that they have their own shop in Tokyo’s trendy Harajuku neighborhood.

But since then, the company has lost money as it works to promote its mobile payment service.

SoftBank, too, is facing tough times.

The merger announcement comes just weeks after SoftBank Group posted a $4.6 billion loss from its investment in WeWork, the embattled office space company. WeWork has seen its value crumble after its attempt at a public offering collapsed under scrutiny of the company’s business model and accusations of self-dealing by its founder, Adam Neumann.

SoftBank, which is the world’s largest tech investor, has used its $100 billion Vision Fund to pick winners and losers in the start-up world. But its investment model has come under increasing scrutiny over its large and sometimes quixotic bets on loss-making companies like Uber and the on-demand dog walking company Wag.

At a news conference following the announcement of SoftBank’s financial results, the company’s chief executive, Masayoshi Son, said that he regretted some of his decisions involving WeWork, but that he would not change his company’s underlying strategy of placing big wagers on companies that he believes have the potential to transform entire industries.