WASHINGTON — An ambassador at the center of the House impeachment inquiry testified on Wednesday that he was following President Trump’s orders, with the full knowledge of other top administration officials, when he pressured the Ukrainians to conduct investigations into Mr. Trump’s political rivals in what he called a clear “quid pro quo.”

Gordon D. Sondland, Mr. Trump’s envoy to the European Union, told the House Intelligence Committee that he reluctantly followed Mr. Trump’s directive. He testified that the president instructed him to work with Rudolph W. Giuliani, Mr. Trump’s personal lawyer, as he pressured Ukraine to publicly commit to investigating former Vice President Joseph R. Biden Jr. and an unsubstantiated theory that Democrats conspired with Kyiv to interfere in the 2016 election.

His appearance amounted to an act of defiance by an official who has been described by other witnesses as a point man in the push to extract the investigations. In his testimony, Mr. Sondland linked the most senior members of the Trump administration to the effort — including the vice president, the secretary of state, the acting chief of staff and others. He said they were informed of it at key moments, an account that severely undercut Mr. Trump’s frequent claims that he never pressured Ukraine.

Instead, Mr. Sondland, a wealthy Republican megadonor, described an expansive effort to help the president do just that.

Later on Wednesday, a Defense Department official, Laura K. Cooper, testified that Ukrainian officials may have known as early as late July that a $391 million package of security assistance was being withheld by the Trump administration.

The testimony by Ms. Cooper called into question another central element of the president’s defense: that there was no pressure because Ukrainian officials were unaware that the money was frozen.

Mr. Sondland has repeatedly claimed not to have recalled key episodes, and he conceded during testimony on Wednesday that he did not record precisely what had happened. He blamed the State Department for not providing him with all his emails, call logs and other records.

Still, he offered revelations and had the evidence to corroborate them.

Secretary of State Mike Pompeo signed off on parts of the pressure campaign, Mr. Sondland testified, and Mick Mulvaney, the acting White House chief of staff, was deeply involved. They understood, as he did, that there was a quid pro quo linking a White House meeting for President Volodymyr Zelensky of Ukraine to a promise by him to announce investigations into Mr. Trump’s political rivals, he said.

“I know that members of this committee have frequently framed these complicated issues in the form of a simple question: Was there a quid pro quo?” Mr. Sondland said. “As I testified previously, with regard to the requested White House call and White House meeting, the answer is yes.”

Mr. Sondland testified that he came to believe that Mr. Trump was also linking congressionally approved military assistance to Ukraine with a public commitment by Mr. Zelensky to investigate Mr. Trump’s political adversaries. Mr. Sondland said he informed Vice President Mike Pence of his concern about that connection during a Sept. 1 meeting in Warsaw.

Ms. Cooper testified that Ukrainian officials had reached out to the State and Defense Departments with questions about the status of the military funding on July 25, only hours after Mr. Trump pressed Mr. Zelensky during a phone call for the investigations. Republicans have insisted that Ukraine did not know that the aid had been held up until it was reported in the news media in late August.

Beyond the evolving timeline, Mr. Sondland’s testimony raised questions about whether the other top administration figures he mentioned — including Mr. Pompeo, Mr. Mulvaney and John R. Bolton, the president’s former national security adviser — would come forward to testify.

The Trump administration tried to block the testimony of Mr. Sondland, Ms. Cooper and David Hale, the No. 3 State Department official, who also appeared on Wednesday, and refused to allow Mr. Sondland access to certain documents, he said, which it also withheld from the committee despite a subpoena.

Democrats pointed to the administration’s stonewalling as yet another piece of evidence for an impeachment article against Mr. Trump for obstruction of Congress.

“It goes right to the heart of the issue of bribery, as well as other potential high crimes and misdemeanors,” Representative Adam B. Schiff, Democrat of California and the chairman of the Intelligence Committee, told reporters during a brief break in the hearing. 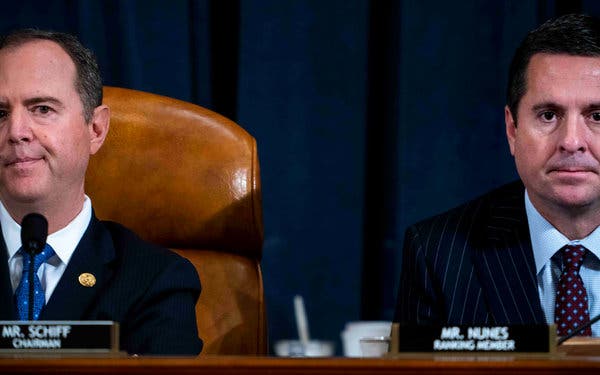 Republicans, moving to discredit Mr. Sondland, seized on his assertion that Mr. Trump never personally or explicitly told him about conditions on the White House meeting or the security assistance. Mr. Sondland said under questioning that he came to the conclusion on his own.

Representative Michael R. Turner, Republican of Ohio, hammered on the point, his voice rising as he sharply questioned the ambassador.

“No one on this planet told you that President Trump was tying aid to investigations,” he added. “Yes or no?”

The ambassador, who smiled often during his appearance and cheerfully admitted to a flair for colorful language and frequent use of “four-letter words” in his conversations with Mr. Trump, appeared to relish pulling other top officials into the spotlight. For weeks, Republicans had cast him as a rogue actor.

“The suggestion that we were engaged in some irregular or rogue diplomacy is absolutely false,” he said, pointing to messages and phone calls in which he kept the White House and the State Department informed of his actions.

Some of the senior officials who figured prominently in Mr. Sondland’s testimony quickly challenged his account, and Mr. Trump tried to distance himself from the ambassador.

“I don’t know him very well — I have not spoken to him much,” Mr. Trump told reporters before leaving for Texas on Wednesday afternoon.

Holding a page of notes scrawled in marker in large block letters, Mr. Trump quoted Mr. Sondland’s closed-door deposition in which the ambassador described a phone call in which the president had told him he did not want a quid pro quo.

Before boarding Marine One, Mr. Trump shouted, “This is the final word from the president of the United States.”

Through an aide, Mr. Pence denied that the two men had spoken one-on-one.

“There was never a time when Sondland was alone with the vice president in Warsaw, and if he’s recalling the pre-briefing, I was in that, and he never said anything in that venue either,” said Marc Short, Mr. Pence’s chief of staff.

Defying the State Department’s wishes, Mr. Sondland shared previously unseen emails and texts that demonstrated how he kept Mr. Pompeo and other administration officials apprised of his efforts to push the Ukranians. In one of them, Mr. Sondland tells Mr. Pompeo about a draft statement in which the Ukranians would commit to the investigations, and about a plan to have Mr. Zelensky speak directly with Mr. Trump about the matter.

“The contents will hopefully make the boss happy enough to authorize an invitation,” Mr. Sondland wrote in an email to Mr. Pompeo.

A week and a half later, Mr. Sondland sent Mr. Pompeo another email asking whether he should arrange a meeting in Warsaw for Mr. Trump where Mr. Zelensky would “look him in the eye” and promise him the investigations, breaking a “logjam.”

Mr. Pompeo issued a statement that appeared intended to deny Mr. Sondland’s testimony, but that did not directly address the ambassador’s assertion that the secretary of state knew and approved of his efforts.

“Gordon Sondland never told Secretary Pompeo that he believed the president was linking aid to investigations of political opponents,” according to the statement from Morgan Ortagus, the State Department spokeswoman.

Mr. Sondland even took shots at Mr. Bolton, who other witnesses have said harbored deep concerns over the ambassador’s actions and repeatedly instructed subordinates to report them to White House lawyers.

“Curiously — and this was very interesting to me — on Aug. 26, shortly before his visit to Kyiv, Ambassador Bolton’s office requested Mr. Giuliani’s contact information from me,” said Mr. Sondland, who repeated himself and then paused to smirk before continuing with his testimony.

One of the more dramatic moments of the day occurred in the final hour in an exchange between Mr. Sondland and Representative Sean Patrick Maloney, Democrat of New York, who elicited a grudging admission from the ambassador that the investigations that Mr. Trump wanted would benefit him politically.

“See? It didn’t hurt a bit,” Mr. Maloney said, drawing a testy response from Mr. Sondland, who said he was trying to be “forthright.”

“It didn’t work so well the first time, did it?” Mr. Maloney shot back, referring to the multiple changes Mr. Sondland has made to his story.

“We appreciate your candor,” Mr. Maloney said, “but let’s be really clear on what it took to get it out of you.”