The wreck of the last U.S. Navy warship sunk by a German submarine during World War II is revealing its secrets in remarkable images from the seabed.

Patrol boat USS Eagle PE-56 was located by a private dive team just a few miles off the Maine coast last year, ending a decades-long mystery about the ship’s location. The ship’s bow was spotted in about 260 feet of water in June 2018 and its stern the following month. The last pieces of the wreck were found in May 2019, according to diver Ryan King of Brentwood, N.H.

King and his dive team were able to confirm that an object previously discovered on sonar by undersea search specialist Garry Kozak was indeed the sunken ship. The divers, who worked with the Smithsonian Channel, extensively explored the ship on the ocean floor, five miles off Cape Elizabeth, Maine. 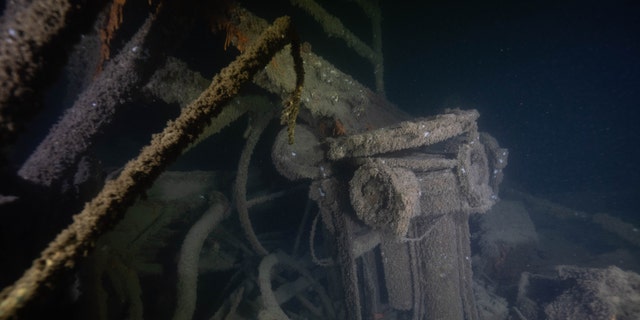 Only 13 of the Eagle’s 62 crew members survived; they were plucked from the water by a nearby Navy destroyer.

“When the torpedo exploded, she snapped in half – only one man got out of the bow section, 12 men made it out of the stern section,” he said.

The exploration of the wreck will be featured in the three-part series “The Hunt for Eagle-56,” which premieres on Sept. 22 at 9 p.m. EST/PST. 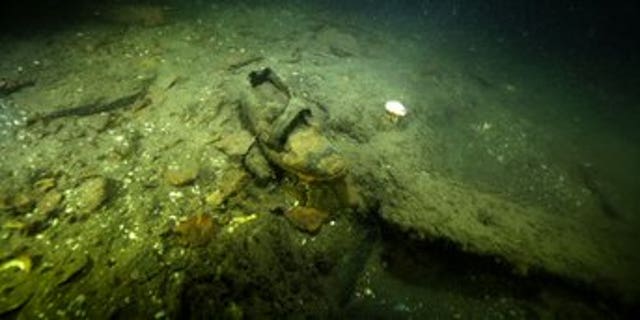 A boot on the seabed at the USS Eagle wreck site. (Smithsonian Channel)

During his dives, King explained that he could clearly see the Eagle’s deck machinery and its massive 16-foot deck gun on top of the forward crew quarters.

“It really is a humbling experience when you’re down there, you’re not just on a shipwreck, you’re on a gravesite,” he said. “We haven’t touched things, we have made a point of staying out of areas where there is evidence of human remains.”

The Eagle’s helm and its telegraph are clearly visible at the wreck site.

“You’re seeing all of this equipment that is part of the wreck,” King said. “There are lockers that are partially opened, the chart table is still there, there were men sitting around that when the torpedo exploded.”

“You realize that many of the men that used that equipment are still entombed in the wreck,” he added. 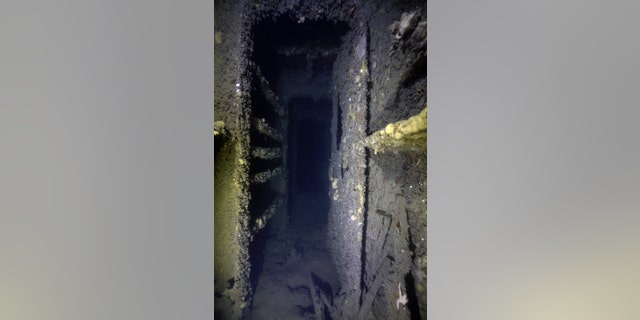 Only 13 of the Eagle’s 62 crew members survived. (Smithsonian Channel)

On the stern, divers also got a view of the ship’s aft escape hatches, where the ladders had fallen away, as described by Eagle’s survivors.

The dive team also saw crew members’ boots strewn around both the bow and the stern sections on the seabed.

The dive team has to be cautious when dealing with parts of the ship containing its ordnance. On their first dive the hook that they sent down caught on a rack of depth charges on the Eagle’s stern.

“It was exciting!” King quipped. “Obviously, they hadn’t gone anywhere for a few years, but we figured that we would live it there.” 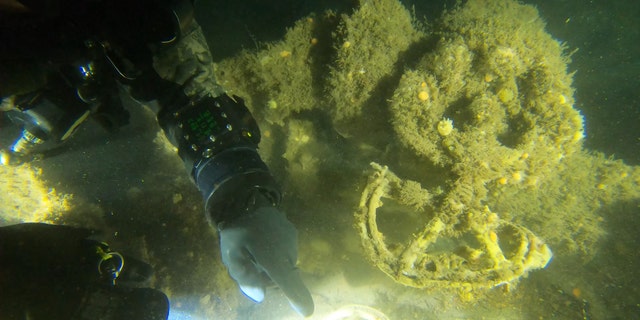 Divers have been exploring the wreck, which was discovered in 2018. (Smithsonian Channel)

Divers have also had to contend with poor visibility at the wreck site, which, on a good day, is just 10 feet.

“It’s incredibly dark, without our lights, you wouldn’t be able to see anything,” said King.

King told Fox News that the team has shared its information on the wreck with the U.S. Navy.

“Once we had a clear picture to bring to the Navy, we brought it to them as quickly as we could,” he said.

In May the Navy wrote to the researchers to tell them that the ship had been out under the protection of the Sunken Military Craft Act, King added.

WRECK OF THE USS JUNEAU, FAMOUS FOR THE DEATHS OF THE 5 SULLIVAN BROTHERS, DISCOVERED IN PACIFIC 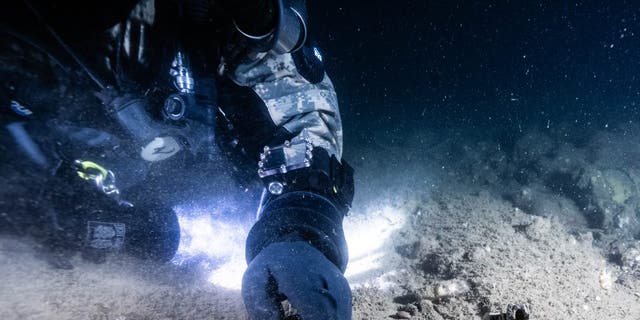 Divers had to contend with limited visibility at the shipwreck site. (Smithsonian Channel)

Earlier this year, for example, the sister of Seaman First Class James Cunningham received his posthumous Purple Heart in a ceremony in Millington, Tenn., Stars and Stripes reports.

“We attended the ceremony – it was a great piece of closure for the family,” said King.

Cunningham, he explained, wasn’t even supposed to be on the ship when it was torpedoed by U-853.

“He was supposed to be on leave – he switched because his friend needed to go home on leave to bury a loved one who passed,” King said.

The diver explained that researchers are working with three families at the moment to help them get their Purple Hearts.

“We have some deadlines, there are family members that are older,” he said. 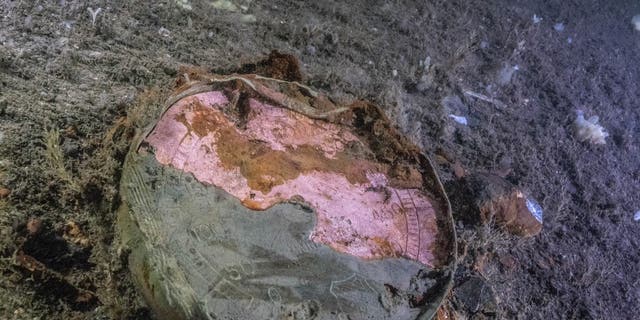 An item at the USS Eagle PE-56 wreck site. The patrol boat was sunk by the U-853, a German submarine. (Smithsonian Channel)

The Naval History and Heritage Command did not respond to a Fox News a request for comment on this story.

Research undertaken by Paul Lawton, a Massachusetts attorney, naval historian and diver, played a key role in confirming the Eagle’s sinking by U-853.

“That was a result of Paul’s work and Bernard Cavalcante of the Naval History and Heritage Command,” King said.

The ship’s sinking is also the subject of Stephen Puleo’s 2005 book “Due to Enemy Action: The True World War II Story of the USS Eagle 56.” 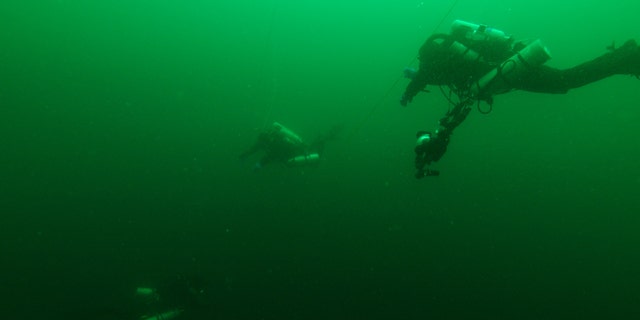 The U-853 was later sunk off  Block Island on May 6, 1945, by depth charges from USS Atherton and USS Moberly. All hands were lost in the sub’s sinking, which occurred two days before V-E Day, according to the Naval History and Heritage Command.

Researchers across the globe are working to locate sites of World War II wrecks. The wreck of an Australian freighter, for example, was recently discovered, as was the wreck of a U.S. B-24 bomber that plunged into the sea off Bermuda in February 1945.

And earlier this year, the wreck of World War II aircraft carrier USS Wasp was found in the Coral Sea, and the RV Petrel discovered one of the first Japanese battleships to be sunk by U.S. forces during the war. Imperial Japanese Navy ship Hiei sank on Nov. 14, 1942, in the Solomon Islands. 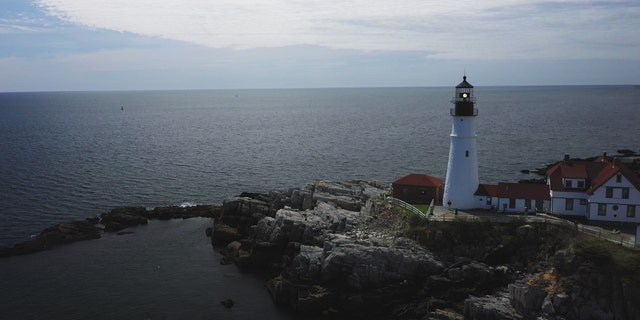 The wreck was discovered off the coast of Maine. (Smithsonian Channel)

Wasp was also spotted on the seabed by experts from the vessel RV Petrel, which is part of a research organization set up by the late billionaire Paul Allen.

Allen, Microsoft’s co-founder, died in October 2018 from complications of non-Hodgkin’s lymphoma. His research organization has discovered a host of historic military shipwrecks, such as the wrecks of the USS Helena, the USS Lexington and the USS Juneau.

MYSTERIOUS SHIPWRECK SPOTTED, MAY BE MERCHANT SHIP SUNK BY U-BOAT DURING WW II

The group’s biggest discovery, however, came in 2017, when Allen and his team found the long-lost wreck of the USS Indianapolis in the Philippine Sea. 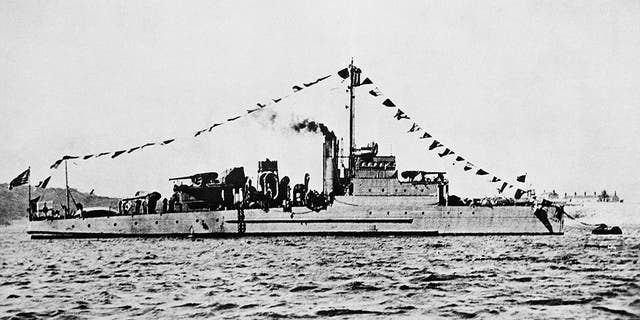 Eagle class patrol boat built during World War I. It is similar to the USS Eagle PE-56, which exploded and sank off Cape Elizabeth, Maine, on April 23, 1945, killing most of its crew in New England’s worst naval disaster during World War II. (AP Photo/U.S. Navy, File)

In a separate project, the wreckage of U.S. B-24 bomber, for example, was found in Papua New Guinea. The plane’s wreck was found in 2018, 74 years after it was shot down during a fierce battle with Japanese forces.

Last summer, a team of scientists from the Scripps Institution of Oceanography at the University of California San Diego and the University of Delaware located the missing stern of the destroyer USS Abner Read, which was torn off by a Japanese mine in the remote Aleutian Islands.

Also last year, a decades-long mystery about the fate of a ship that disappeared during a World War II rescue mission was finally solved. 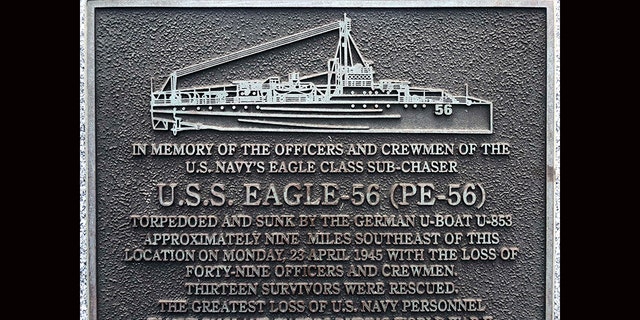 ​A plaque at Fort Williams Park at Cape Elizabeth, Maine, on Thursday, July 18, 2019, remembers those killed when the USS Eagle PE-56 was sunk During World War II off the Maine coast on April 23, 1945. (AP Photo/David Sharp)

Fox News’ Nicole Darrah and the Associated Press contributed to this article.