How is coronavirus affecting immigration into the US?

As COVID-19 continues to impact nearly every facet of daily life, the response from the United States have resulted in several changes to the country’s immigration system.

In March, President Trump signed an executive order closing the southern border to stop the spread of the virus from undocumented immigrants who are possibly infected.

“The Centers for Disease Control and Prevention is exercising its authority under Title 42 of the U.S. Code to give Customs and Border Protection the tools it needs to prevent the virus coming through the northern and southern borders,” he said during his announcement of the move.

The action has resulted in more than 6,000 migrants being turned away at the U.S.-Mexico border, according to data from the U.S. Customs and Border Protection.

Below are some of the ways the rapidly spreading coronavirus has tweaked the immigration system, impacting millions who are effectively left in limbo until things return to normal.

The U.S. Citizenship and Immigration Services announced last week that it was closing its in-person services at field office, asylum offices and application support centers until May 3.

The agency, which acts as the core agency dealing with most forms of legal immigration and asylum cases in the U.S., said it would continue to provide emergency services and “mission-essential services” that don’t require face-to-face contact.

Field offices will send notices to those with appointments or naturalization ceremonies, while asylum applications will receive a new interview notice with a new appointment time.

The May 1 date also applies to hearings for those placed in the Migrant Protection Protocols (MPP) program, known as Remain in Mexico, which keeps migrants in Mexico while their asylum hearings play out.

The United States has suspended nonessential travel to Canada and Mexico.

“These measures will protect the health of all three nations and reduce the incentive for mass global migration that would badly deplete the health care resources needed for our people,” President Trump said during a White House press briefing last month.

Guatemala suspended a landmark asylum agreement with the U.S. last month amid concerns over the pandemic. The country said it would halt incoming flights carrying deportees and asylum-seekers sent by the U.S.

“Starting today all flights of returnees under the [agreement with Washington] are suspended for the duration of the state of calamity,” Foreign Minister Pedro Brolo said.

Border crossings have declined dramatically in March and April, according to CBP. The agency said an average of 600 people crossed the border a day since the Trump administration closed the border to migrants to contain the spread of the virus, according to The Wall Street Journal. 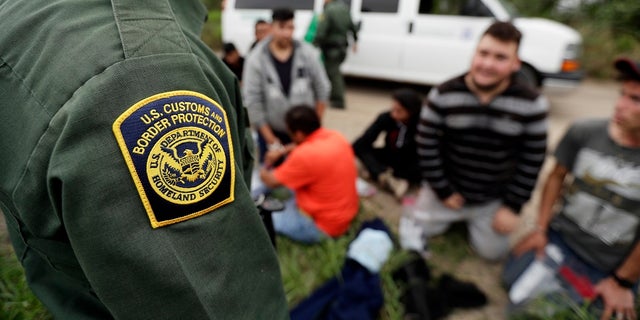 In this Thursday, March 14, 2019, file photo, a Border Patrol agent talks with a group suspected of having entered the U.S. illegally near McAllen, Texas. The Trump administration has quietly shut down the nation’s asylum system for the first time in decades amid coronavirus concerns, largely because holding people in custody is considered too dangerous. (AP Photo/Eric Gay, File)

The State Department suspended the admission of refugees for a three-week period through April 6.

“We will work with our implementing partners to plan for a resumption of refugee arrivals on or after April 7,” an agency spokesperson told Fox News last month.