Two-time Olympic gold medalist Kaillie Humphries asked to be released from Team Canada in order to compete for Team USA after accusing Bobsleigh Canada of harassment.

Humphries, who competed for Canada at the 2010 and 2014 Winter Olympics, claimed she has been waiting to be released from Bobsleigh Canada for several weeks, CBC Sports reported Thursday.

“I want to say thank you to Canada, who has been a huge support. It’s really hard. It’s hard. This has been my life,” the 34-year-old champion said. “This has been a 15-year career. It’s been everything I’ve dreamed of since I was a kid.

“To know that a country has supported me so strongly and the people in the country have been so great — that I have to either consider being forcefully retired and having somebody else dictate what happens to my career.” 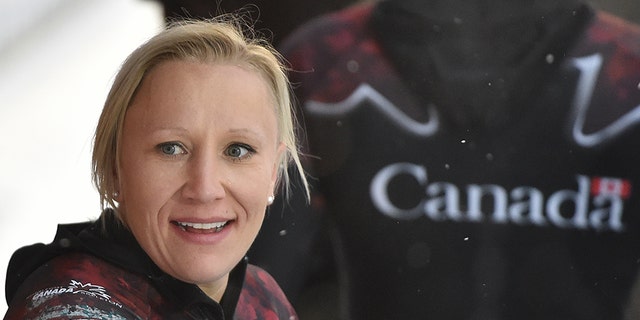 Canadian bobsledder Kaillie Humphries celebrates after her victory in the 2-person bobsleigh category at the world cup at the DKB ice track in Altenberg, Germany.  (Getty)

Humphries filed the complaint against Bobsleigh Canada in August 2018 and is suing the organization for blocking her release from the national team and for breaching a contract over athlete-coach code of conduct, according to CBC Sports.

She told the news organization in January she was in “a position where my workplace environment was impaired and I couldn’t compete.” The internal investigation is ongoing.

Bobsleigh Canada didn’t comment on Humphries’ case but said it still follows its harassment and discrimination policy, which was set in 2006.

Humphries told CBC Sports she’d rather compete for Team USA. She is marrying American Travis Armbruster, who competed as a brakeman for the U.S. men’s bobsleigh team, on Saturday.

According to International Olympic Committee rules, an athlete who plans on changing countries may participate in the Games to “represent his new country provided that at least three years have passed since the competitor last represented [their] former country.”

Humphries won gold in the two-woman bobsleigh in 2019 and 2014. She also became the first woman to drive an all-female against men in a four-person World Cup bobsled race in 2016.

The next Winter Olympics is set to take place in 2022 in Beijing.