Harry and Judy Wiley plan to walk down their driveway in Johnson City, Tenn., on Sunday, climb inside their 39-foot motor home, flip on the television and do the best they can to enjoy NASCAR‘s Coca-Cola 600 — a staple of their Memorial Day weekend for decades.

But it won’t be the same as being in North Carolina. 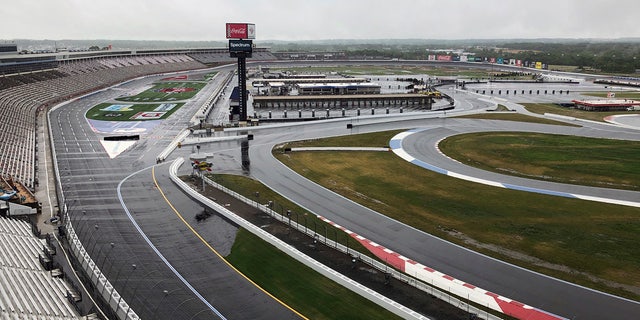 The crown jewel race will go on as planned as NASCAR cranks up its schedule following a 10-week shutdown during the coronavirus pandemic. There are 20 races scheduled through June 21, but NASCAR does not plan to allow spectators to attend.

It’s heartbreaking for the Wileys, who have made the yearly pilgrimage to Charlotte Motor Speedway since the late 1970s to see the longest race on the NASCAR calendar. They spend about 18 days every May camping at the track and reuniting with lifelong friends amid the backdrop of auto racing.

The Wileys plan their entire year around the event.

“When I pull into the Charlotte Motor Speedway every year it’s like the golden gates of heaven to me,” said Wiley, who is 73. “So this is like losing a friend. I have nothing to do now. I look forward to this so much.”

The race can draw as many as 100,000 spectators, though numbers have dwindled in recent years. This will be the first time no one is there besides the tenants of a 52-unit condominium tower located outside the first turn.

The speedway is offering fans a 120% credit toward future races or fans can choose a full refund.

“This is the most bittersweet of circumstances for our entire team at the speedway,” said Scott Cooper, the speedway’s vice president of communications. “We work year-round to produce memorable experiences for our fans. The last thing we would ever want to is to run a race without spectators but these are unusual times. But it is rewarding for our staff to know we’re at least playing a big role in bringing the races back to television.”

Mike Kleban, a 78-year-old fan who lives a few miles from the track in Harrisburg, North Carolina, has attended the last 54 Coca-Cola 600 races. He dreads the thought of his streak coming to an end.

HOW TO WATCH THE COCA-COLA 600

“I asked the folks at the track if they would let me in at the start of the race to watch the first three or four laps just to keep (the streak) alive,” Kleban said with a laugh. “But they said, ‘We can’t do that.’”

Kleban feels even worse for the military service members he annually hosts as part of the speedway’s Memorial Day weekend tribute to the armed services.

Last year, Kleban and friends rented 20 infield campsites and hosted more than 60 members of the military and their families, many of whom are a part of the Wounded Warrior program. They provided free meals, a place to sleep and hats and shirts. He estimates it cost $3,000 but is an enjoyable spend.

“It’s like a reunion for them,” said Kleban, who served four years in the Air Force. “We get together with guys who have fought together side by side. Every year it just keeps on growing with more and more people.”

The Wileys often choose the RV campground outside of turn four for their campsite. They host a potluck dinner for more than 50 friends, a tradition that was born 15 years ago when Harry helped fix a fan belt in a stranger’s RV that had broken down near the track. Harry was invited to dinner the following night in gratitude. Since then, they’ve become close friends and the potluck tradition was repeated every Wednesday night before the big race.

In the campground, Harry is known as “the mayor” because he knows just about everyone.

He said he’ll miss the familiar scent of barbecue ribs on the grill, corn on the cob and sharing beverages with other fans in lawn chairs under awnings while talking about life, loved ones and, of course, racing. Man of them have become lifelong friends, and they’ve traveled to weddings and funerals across the country to be with them.

“It’s friendships beyond friendships,” Wiley said. “We’ve known a lot of these people for 30-plus years. They’re family. So I’m going to miss everyone terribly.”

Ronnie Mounts has made the trek every year from Gilbert, West Virginia. He has been to every race since the first World 600 in 1960 except for three he missed while serving in the Army. He was looking forward to seeing the friends he met from Canada at last year’s race.

“Honestly, I think it’s silly and I think we’ve gone too far in keeping fans away,” Mounts said. “It’s sad. It’s like people smoking a cigarette and they can’t have one.”

He sighed and added: “I’ll guess I’ll just watch it on TV.”