Former President Jimmy Carter said he couldn’t have handled the presidency at 80 years old — seemingly taking jabs at some presidential candidates who are well into their 70s.

Carter, 95, served as the 39th U.S. president from 1977 until 1981, when he was in his 50’s. Speaking during his annual report at the Carter Center in Atlanta, Ga., on Tuesday, he said he hopes “there’s an age limit” to serving in one of the most powerful positions in the world.

“If I were just 80 years old, if I was 15 years younger, I don’t believe I could undertake the duties I experienced when I was president,” he told the crowd after being asked about whether he would run in 2020 since he can technically still run for office. 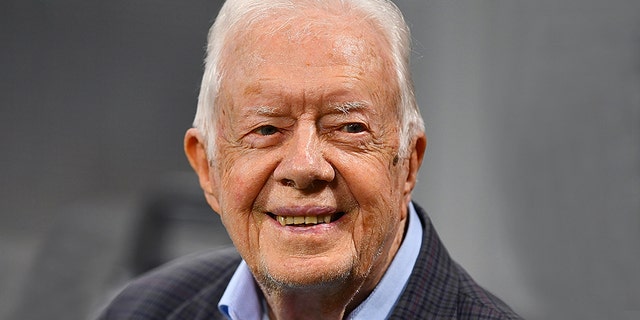 JOY BEHAR WARNS JULIAN CASTRO AGAINST CRITICIZING OLD PEOPLE: ‘WE WILL TURN ON YOU’

Former Vice President Joe Biden is 76 and Sen. Bernie Sanders, I-Vt., is 78. If they were to win the Democratic nomination and ultimately the presidency, they would turn 80 while in office.

The age of presidential nominees has come into play as they vie for the role. At last week’s Democratic debate in Houston, Texas, frontrunner Biden came under fire for his mental acuity — most notably from former Housing Secretary Julian Castro who swiped at Biden’s memory.

“You just said two minutes ago they would have to buy in. Are you forgetting what you said two minutes ago?” Castro asked, in what appeared to be a reference to past senior moments by Biden. Castro, as it turned out, was wrong in his claim about Biden’s health care plan.

Rival Sen. Cory Booker, D-N.J., backed Castro after the debate, and raised further questions about Biden, telling CNN: “I think we are at a tough point right now, because there’s a lot of people concerned about Joe Biden’s ability to carry the ball all the way across the end line without fumbling. …  I think that Castro had really legitimate concerns about can he be someone in a long grueling campaign… and has every right to call out.”

A video released by Trump’s re-election campaign on Tuesday also swiped at Biden’s fitness for office, spotlighting clips of his recent gaffes and other verbal fumbles coupled with copious clips of pundits questioning his readiness.

Carter on Tuesday said, “The things I faced in foreign affairs, I don’t think I could undertake them at 80 years old. At 95, it’s out of the question. I’m having a hard time walking.”

The former president — who recently became the longest-living president in American history — said he hasn’t decided on a 2020 primary candidate, but noted he’ll “keep an open mind.”

“One of the major factors I will have in my mind is who can beat Trump,” Carter said, weeks before his 95th birthday. In the 2016 election, he voted for Sanders.

Fox News’ Paul Steinhauser and Adam Shaw and The Associated Press contributed to this report.