The ex-FBI agent who jumped into action when a gunman opened fire on worshipers during a church service in Texas said Monday he was placed in a position he didn’t want to be in, but had to react because “evil exists.”

Two men were killed when the gunman opened fire at West Freeway Church of Christ in White Settlement on Sunday morning as more than 240 parishioners were inside. Within seconds, he was shot to death by two congregants who fired back.

Jack Wilson, a Hood County resident running for commissioner for Precinct 3 who is the head of the church’s security team, shared some details on his campaign’s Facebook page as he gave thanks to “all who have sent their prayers and comments on the events of today.”

TEXAS CHURCH SHOOTING GUNMAN HAD ‘SOMETHING NOT RIGHT’ ABOUT HIM, WITNESS SAYS

“The events at West Freeway Church of Christ put me in a position that I would hope no one would have to be in, but evil exists and I had to take out an active shooter in church,” he wrote. “I’m thankful to GOD that I have been blessed with the ability and desire to serve him in the role of head of security at the church.” 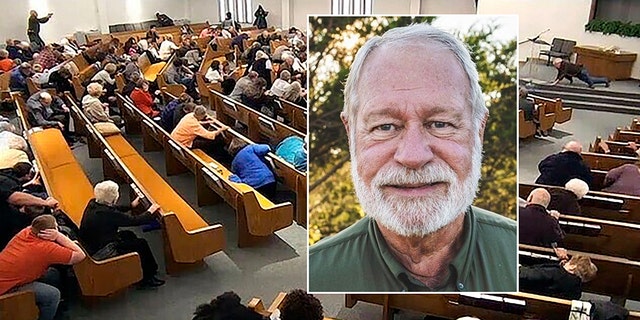 Jack Wilson said he “had to take out an active shooter in church” in a Facebook post. (West Freeway Church of Christ/Courtesy of Law Enforcement via AP/Facebook)

At a news conference Sunday night, White Settlement Police Department Chief J.P. Bevering told reporters the gunman – who has yet to be identified – had sat down in a pew before getting up, taking out a shotgun and firing at a parishioner, who was killed.

A livestream of the church service shows the gunman getting up from a pew and talking to someone at the back of the church before pulling out a gun and opening fire. Parishioners can then be heard screaming and seen ducking under pews or running as papers fly to the floor. 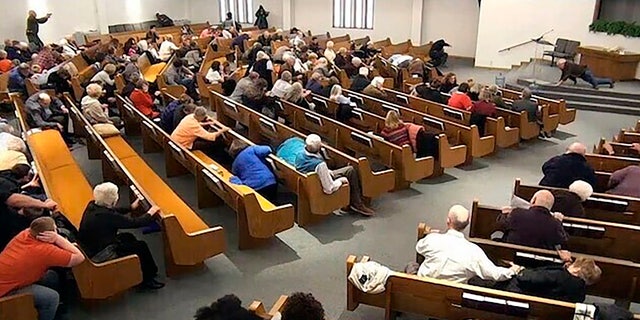 In this still frame from livestreamed video provided by law enforcement, churchgoers take cover while a congregant armed with a handgun, top left, engages a man who opened fire, near top center just right of windows, during a service at West Freeway Church of Christ, Sunday, Dec. 29, 2019, in White Settlement, Texas. (West Freeway Church of Christ/Courtesy of Law Enforcement via AP)

Lt. Gov. Dan Patrick told reporters on Sunday the church’s team responded “quickly,” and within six seconds, the shooting was over.

“Two of the parishioners who were volunteers of the security force drew their weapons and took out the killer immediately, saving untold number of lives,” Patrick said.

On his Facebook page, Wilson lists his personal history as a small business owner for 30 years and who served in negotiating proposals and contracts for a major defense company. He said he also served as a Hood County Reserve Deputy Sheriff from 1980 to 1986. It was not immediately clear when he served as an FBI agent.

“I continue to work with Federal, State and local levels of law enforcement,” he wrote on his personal history.

Wilson, who has previously posted on Facebook does “totally “stand” by President Trump, said his mission of running for the county office is to “be  accessible to serve the public with honesty and integrity, to help provide essential services through an efficient and effective use of the County’s resources and to be accountable to the citizens of Precinct 3 and all citizens of Hood County.”

The commissioner candidate says his wife of 51 years has raised his family in Granbury/Hood County for the last 42 years, and are the proud parents of three daughters and the “blessed grandparents” of 10, and 1 great-grandchild.

“I feel I have the knowledge and passion to move this growing county into a place all residents can be proud to call home,” he wrote.

“I am very sad in the loss of two dear friends and brothers in CHRIST, but evil does exist in this world and I and other members are not going to allow evil to succeed,” he wrote. “Please pray for all the members and their families in this time. Thank you for your prayers and understanding.”