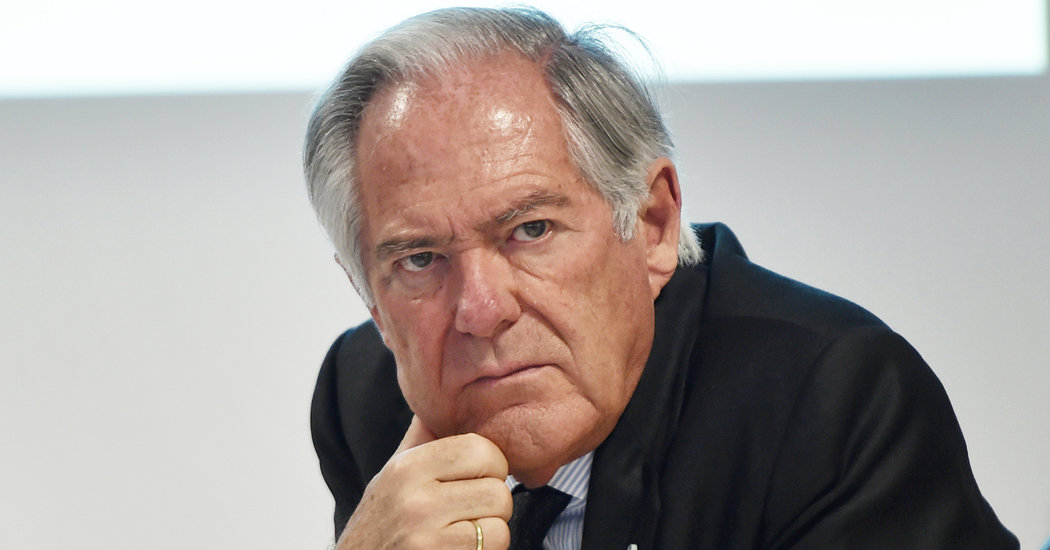 FRANKFURT — In his heyday, Roland Berger may have been the best-connected man in Germany. He advised chancellors and chief executives, founded one of Europe’s leading management consulting firms and rode Germany’s postwar rebound to become one of the country’s richest self-made men. Business magazines put him on the cover.

But in the twilight of his career, Mr. Berger’s image as ubiquitous boardroom consigliere and icon of the German economy is at risk. An exposé by the newspaper Handelsblatt asserts that he repeatedly misrepresented a key element of his personal history, portraying his father as a Nazi resister when in fact he was a high-ranking official.

The fallout from the Handelsblatt revelations has been devastating for the reputation of Mr. Berger, 82, and the foundation he endowed with 50 million euros, or $55 million, of his own money. The Roland Berger Foundation was forced last month to cancel a ceremony to bestow its annual Human Dignity Awards after two of the three recipients said they would no longer accept. The ceremony was to be held at the Jewish Museum in Berlin.

Mr. Berger had often invoked his father, Georg Berger, as an inspiration for the award.

“We had the Gestapo come to our house every six weeks,” Mr. Berger told an audience in Munich in 2017. “My father was locked up at some point.” That is why, Mr. Berger said, “I award the Human Dignity Award to people who contribute to freedom and tolerance, human rights and values all over the world.”

The prize was a major event, with €1 million, or $1.1 million, divided among the winners. For many years, Kofi Annan, the former secretary general of the United Nations, led the jury that selected recipients.

Historical documents uncovered by Handelsblatt and viewed by The New York Times present a less heroic picture of Georg Berger, who died in 1977. They show that he was an early member of the Nazi party who later served as chief bookkeeper for the Hitler Youth. Rudolf Hess, Adolf Hitler’s deputy, once wrote him a letter of recommendation.

In the early 1940s, when Roland was a small boy, the Berger family lived in an elegant villa in Vienna that had been seized from deported Jews, the documents indicate.

That would not matter so much if Roland Berger had not later made Georg Berger’s biography a part of his personal legend.

Mr. Berger told of heartbreaking visits to his father in Gestapo detention, and said his father was later held at Dachau, the notorious concentration camp near Munich.

Handelsblatt’s research indicated that Georg Berger indeed ran afoul of Hitler’s regime, but not until 1942. He was accused of illegally hoarding food, not political resistance. The research cast doubt on whether Georg Berger was incarcerated by the Nazis, and indicated that he remained a member of the party until 1944.

It is unclear whether Mr. Berger was simply repeating stories he had heard from his father or was aware that some elements were untrue. There are ambiguities in the case. After the war, Allied tribunals that scrutinized Georg Berger’s past concluded that he was both Nazi collaborator and victim.

Through a spokeswoman, Mr. Berger declined a request for an interview. He has hired two well-known professors, Michael Wolffsohn, an authority on German-Jewish history, and Sönke Neitzel, an expert on World War II, to examine the records.

“Should this investigation lead to new insights into his father’s role and responsibilities, Roland Berger is, of course, prepared to revise his father’s image,” a statement issued by the foundation said.

Mr. Wolffsohn said in an email that he and Mr. Neitzel did not want to comment until their report is finished early next year.

German companies have often had to apologize for collaborating with the Nazis or for falsely claiming to have resisted Hitler’s regime. Volkswagen, Daimler and Deutsche Bank have hired outside historians to document their use of slave labor or contribution to the German war machine.

The Reimann family, which controls the company that owns brands such as Krispy Kreme Doughnuts, Peet’s Coffee, Pret A Manger and Keurig, has recently begun to grapple with the firm’s use of slave labor during World War II and enthusiastic support of the Nazis.

In 2002, Bertelsmann, the German media company that owns the publisher Penguin Random House, was forced to retract assertions, long part of company lore, that the Nazis had shut it down in 1944 for publishing banned books. In fact, Bertelsmann was the largest supplier of books to the German Army, including titles with anti-Semitic themes.

But Mr. Berger’s case is unusual. Born in November 1937, he was only 7 when Germany surrendered.

Mr. Berger appears to have said little about his father until around 2003, when he gave up day-to-day management of the firm he founded in 1967, Roland Berger Strategy Consultants.

The firm is one of the few European consultants able to compete with American giants like McKinsey & Company. In addition to chief executives of blue-chip companies, Mr. Berger advised political leaders including Helmut Kohl, the long-serving German chancellor. After Mr. Kohl’s conservative party was defeated in 1998, Mr. Berger became an adviser to the new socialist chancellor, Gerhard Schröder.

While management consultants usually prefer to operate in the shadows, Mr. Berger cultivated a personal brand. He often gave interviews and commissioned a portrait of himself by Andy Warhol.

Georg Berger, his father, was a veteran of World War I who in 1921 joined a business group close to Hitler. In 1931, two years before Hitler came to power, Georg Berger joined the Nazi Party. At the time, he worked as a freelance bookkeeper.

In 1936, Georg Berger swore allegiance to Hitler in the same Munich beer hall where the Nazis had launched an unsuccessful putsch attempt in 1923. The oath was a prerequisite for becoming chief bookkeeper of the Hitler Youth.

Documents show that Georg Berger resigned his post with the Hitler Youth for unspecified health reasons in September 1939. That was almost a year after so-called Kristallnacht, when Nazi-inspired mobs burned synagogues and destroyed Jewish-owned shops. Contrary to the version presented by Roland Berger, Georg Berger continued to pay Nazi party dues until 1944.

In 1940, Georg Berger became general manager of Ankerbrot, Austria’s largest bakery, with help from Nazi officials. The business in Vienna had been seized from Jewish owners who had been forced to flee.

The first sign that Georg Berger was falling out of favor with the Nazis came in 1942. Acting on tips, the Gestapo twice raided the villa in Vienna where the Berger family lived. The secret police found evidence that Georg Berger was illegally hoarding butter, eggs, soap and other scarce items that were strictly rationed at the time, according to Gestapo documents.

The elder Berger was also accused of diverting workers from the bakery to do renovations at the villa. His file in the German Federal Archives does not indicate what punishment, if any, was imposed.

The Roland Berger Foundation suggested that the accusations against Georg Berger might have been politically motivated, and that the charges of hoarding were merely a pretense.

“Nazi and Gestapo documents often have a denunciatory character and often reflect conflicts over power and influence within Nazi institutions,” the statement said.

After the war, the Allies held Georg Berger in an internment camp. Like thousands of other functionaries and businessmen, he was brought before a tribunal to determine how actively he had supported Hitler’s regime.

The tribunal heard testimony that Georg Berger had been imprisoned by the Gestapo and escaped being sent to Dachau only because a sympathizer inside the secret police intervened. Instead, according to the testimony, the elder Berger was sent as a soldier to the Eastern Front — a marginally better fate — where the Soviet Army captured him.

Testimony presented at these so-called denazification hearings was notoriously unreliable. Many of the accused recruited friends or family to lie on their behalf and to reinvent them as resisters and dissidents.

Georg Berger’s Gestapo file makes no mention of imprisonment, Dachau or the Russian front. Handelsblatt said its team of reporters had scoured archives in Germany and Austria and found no evidence that the Nazis incarcerated him or that he was a prisoner of war.

The denazification tribunal as well as an appeals panel later classified Georg Berger as a low-level Nazi collaborator. He was barred from holding influential positions in business, politics or media for two years.

The more favorable portrait of Georg Berger later presented by Roland Berger may simply have been the work of a son eager to believe his father was a hero. But much of the information, such as the dates of Georg Berger’s Nazi party membership, were readily available in archives. A person with Mr. Berger’s resources could have easily checked.

“Roland Berger did not conceal any information about his father,” the Roland Berger Foundation said. “He just didn’t have all the documents.”