Baker Mayfield has no regrets over penalty for ref criticism: ‘They fine you for some ridiculous things’

Cleveland Browns quarterback Baker Mayfield has no regrets over the fine he received for criticizing officials following the team’s Week 6 loss to the Seattle Seahawks.

Mayfield was fined $12,500 for saying the referees were “pretty bad.” But if that’s what it takes to point out the woeful officiating, Mayfield said he was fine with that.

“Well, one, I wouldn’t say it’s complaining when it’s blatantly obvious,” the second-year quarterback said Wednesday, according to the Cleveland Plain-Dealer. “I’d say that’s just stating facts. Freedom of speech I thought, but that’s OK, I get fined for it. It’s the league, that’s what they do. They fine you for some ridiculous things. That’s just how it is. There’s a reason that everybody is talking about it.”

He added: “It goes for every team. We’re not going to get a lot of calls, and we know that, especially going into this week. There’s no time to worry about it. No time to stress about it. Just play our game.” 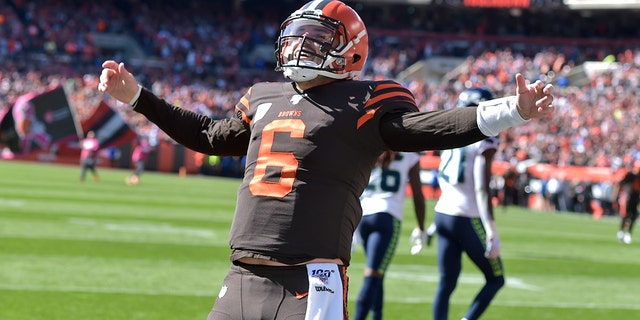 Cleveland Browns quarterback Baker Mayfield celebrates a touchdown during the first half of an NFL football game against the Seattle Seahawks, Sunday, Oct. 13, 2019, in Cleveland. (AP Photo/David Richard)

As Mayfield and the Browns prepare to take on the New England Patriots, the NFL sent a memo to all 32 teams reminding them that the league prohibits criticism of officiating, including posts on social media.

“There is no question about that, none whatsoever,” Polian said. “I mean, you’re talking about this year alone, Terry McAulay, John Parry, Gene Steratore, I mean, they’d be in the top five in any given year that they worked. And they’re referees on top of that, so they know all the rules, they know all the interpretations; they understand what goes on at virtually every position. And then Ed Hochuli’s retirement, you lose him and the three others, that’s four of your top five referees by anybody’s standard.”

He added that their departures mean there are less-experienced referees trying to navigate players’ egos along with an ever-changing rulebook.