Daniel Ritchie: I don’t have arms — here’s why that’s a gift, not a curse 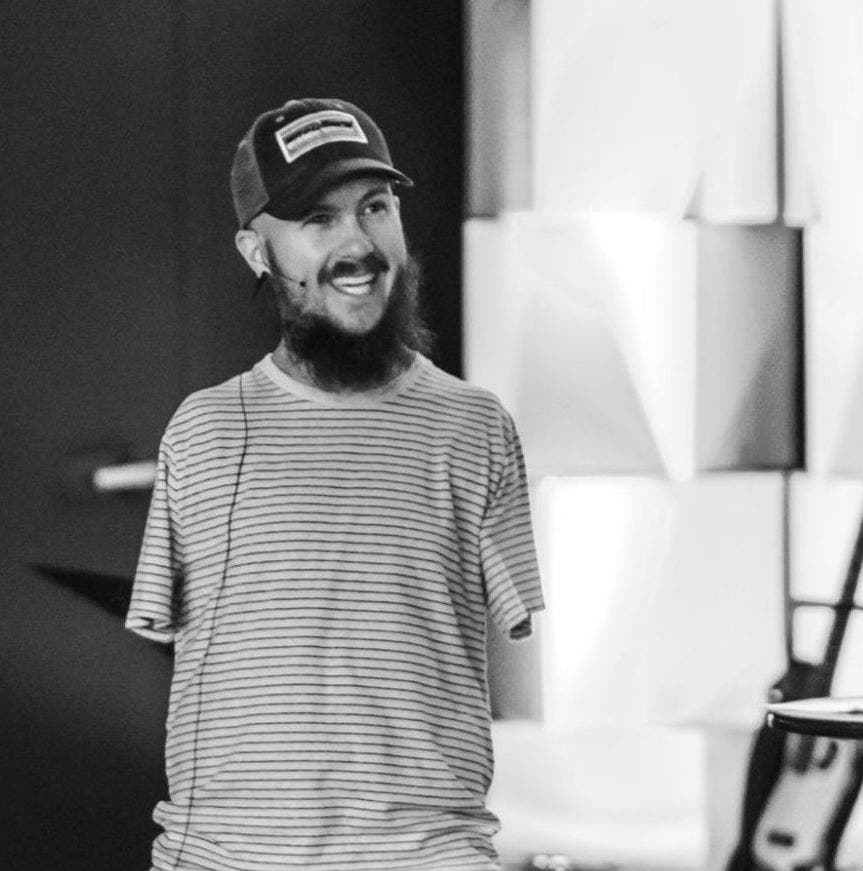 I don’t have arms, which is impossible to conceal from a watchful world.

Two empty shirt sleeves announce that something is missing. It declares that I am different. And if that difference isn’t already obvious enough, it becomes clearer the moment I need to do an ordinary, day-to-day task like eating, writing or opening doors. I have to take my feet out of shoes to accomplish any of those things.

In that moment, there’s no doubt left – I’m not like you.

PAUL BATURA: A MAN UNABLE TO READ AND WRITE TAUGHT VALUABLE LESSONS TO GENERATIONS OF STUDENTS AND TEACHERS

That left me insecure and ashamed for the first two decades of my life. I hated being different. I hated being armless and every fiber of who I was wanted to obscure that. I wanted people to completely disregard the most visibly obvious part of me.

In my late teens, I realized that expecting people to overlook my armlessness was asking them to ignore a part of who I was. My disability wasn’t a mistake. God didn’t just forget the arms as He formed me in my mother’s womb. He wonderfully made me without the use of my arms for a purpose – for His purpose.

God was using my greatest struggle as the greatest asset in my story. He was using what I thought was the worst of me to show the world His grace and strength. My struggle was an inescapable reality to anyone who spent more than 10 seconds with me. But my lack of arms did not define me.

None of us are defined by the things that we don’t have. Human value flows entirely from the fact that God has made us on purpose, with purpose.

My lack of arms didn’t define my worth but it is a key aspect of the path that God had brought me down.

My struggle was an important part of my story, one that points people to hope, strength, contentment, joy – all plainly evident because of the different way I have to live my daily life.

Our struggles, failures and pain don’t have to be the end of our story – they’re simply a part of the path that is shaping us into who we are. Our loss or our lack can go a long way in refining us and showing that there’s hope that extends well beyond our circumstances.

For our struggle to become a helpful and hopeful part of our story, a few steps of faith are required.

The first thing we must do is to expect that struggles and frustration are a guarantee for us in this life. Look around the world. There’s brokenness everywhere.

The first thing we must do is to expect that struggles and frustration are a guarantee for us in this life. Look around the world. There’s brokenness everywhere. Many things are simply not the way they ought to be and that has been the fallen state of all of creation since the sin of Adam in Genesis.

Count me among the many who have been beaten up by the struggles of life. I realized early in my teens that a world made with hands, for hands, would provide a challenge to a man with no hands. The best decision of my life was realizing that my physical, emotional and spiritual struggles were too great for my own abilities – but they were not beyond the life-giving work of God.

Just as much as expecting the struggle in front of me has been important in my growth as a man, it has also been huge for me to embrace my struggles as a part of my story – which is easier said than done. We live in a social media-driven age where we feel the pressure to offer a carefully curated, failure-free portrayal of ourselves to our followers.

We feel that same pressure to be perfect in our everyday relationships as well. But if we can peel back those defensive layers, we see that we’re all hurting. We’re all struggling with life in one way or another. But the good news is we don’t have to be flawless and free from failures. We have a Savior who loves us in the midst of our mess and who rescues us from it.

Once we get to the place where we know our struggles will come and we don’t have to run from them – that’s when we can encourage others by sharing our pain and frustration. God has turned my own pain into a platform of sorts. My vacant shirt sleeves, paired with my smiling face, speak volumes about hope and joy to the people I encounter each and every day.

And that’s the reality for all of us. We have all known struggle and yet here we stand by God’s grace. We know hurt but we also know the comfort that God provides. And as we weave the struggle of life into the comfort God provides, our stories can offer others the hope they desperately need.

Daniel Ritchie: A Virginia pastor prayed for Trump — Here’s what the backlash tells us about the church

By now, many of us have seen and heard about what played out during the 1 p.m. worship service at McLean Bible Church in Washington, D.C. last Sunday.

For those who may be unfamiliar, here’s the short of it: President Trump played a round of golf at Trump National Golf Course in Sterling, VA. After finishing his golf outing, the president decided to stop by Mclean Bible Church — one of the largest evangelical churches in the D.C. Metro area — to visit with Pastor David Platt and to pray for the victims and community of Virginia Beach.

McLean Bible Church and Platt had little notice of the visit. In fact, Platt had just finished his sermon and had stepped backstage for a few moments to prepare for the church to take the Lord’s Supper.

It was in those quiet few moments that he found out that the president of the United States was just minutes away from being at the church.

Dr. Platt was faced with a tough decision. He in no way wanted to endorse the president, his party or his policies as a man who is responsible to shepherd God’s church. Yet, he also did not want to bypass an opportunity to pray for one of the most prominent men on the planet.

In those moments of internal wrestling, a passage from 2 Timothy 1 came to his mind: “First of all, then, I urge that supplications, prayers, intercessions, and thanksgivings be made for all people, for kings and all who are in high positions, that we may lead a peaceful and quiet life, godly and dignified in every way. This is good, and it is pleasing in the sight of God our Savior, who desires all people to be saved and to come to the knowledge of the truth. For there is one God, and there is one mediator between God and men, the man Christ Jesus, who gave himself as a ransom for all, which is the testimony given at the proper time.”

As he reflected on this text, Platt knew the best thing to do was to pray for the president, which is exactly what he did. He clearly presented the Gospel to the president both backstage and in the prayer. 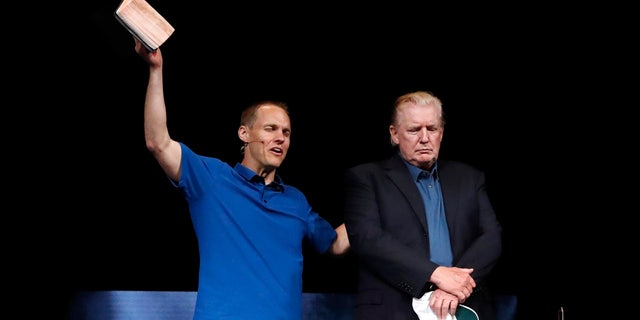 He prayed that God would give Mr. Trump wisdom, grace, and mercy. He prayed that the president would know of God’s promised love for him. He prayed that President Trump would lead and make decisions with justice and equity for all in mind.

With that, the prayer ended and Mr. Trump stepped off the stage without making any public remarks.

And with that, the backlash began.

Many people were hurt because he brought a public official into the pulpit of his church. The criticism was strong enough that he penned a letter to his church in which he explained the Gospel-centered “why” behind his decision to bring the President on stage.

There were others, like Liberty University President Jerry Falwell Jr., who criticized Platt for writing that letter; Falwell deemed it as a cowardly apology and attacked Platt’s male fortitude.

The backlash has left one apparent truth in its wake: there’s a worldview problem in the church.

Scripture describes that when someone trusts Jesus as Lord, they are a new person. They begin to have new tastes, new affections and a new way to see the world. They do not view things as they always have; they now view everything that they take in on a daily basis through the lens of Scripture. Through the lens of God’s grace-giving Gospel.

There are some, plainly evidenced in this situation, that view Gospel truths through a political lens first. But that is not how the church needs to view the world. We have to view every situation through a Gospel lens.

As we begin to process realities like Platt’s prayer or the pro-life debate or even voting itself through a political lens first and foremost, then we lack a true biblical worldview.

If our first response to political deliberation and conversation is, “How would my political party perceive this?” then we have a functional political idol.

For the Christian, politics as the fundamental way to view the world is destined for failure and strife. The Gospel and Scripture ought to be the funnel that we pour everything through. The things we learn, what we talk about, how we vote and even how we parent are meant to be seen through the lens of the Gospel. We see everything through a Scripture-shaped lens first and that is what a Christian worldview looks like.

As we view the world through a Gospel lens, we begin to see where our allegiance needs to be: God first in all things. Much as was the heart of Platt’s prayer that we would: “aim for God’s glory, align with God’s purpose, and yield to God’s sovereignty.”

In every thought. In every conversation. In every debate. Let that be the way we see the world.