Your Foam Coffee Cup Is Fighting for Its Life

MASON, Mich. — The Dart Container Corporation, by some measures, is an American success story.

The family-owned business was co-founded in Michigan by a World War II veteran with a triple major in mathematics, engineering and metallurgy, and it developed products that, in no small way, helped fuel the modern economy. Dart makes, by the millions, white foam cups, clamshells, coffee cup lids, and disposable forks and knives — the single-use containers that enable Americans to eat and drink on the go. It employs about 15,000 people across 14 states.

But now many of the products that this low-profile Midwestern company creates are being labeled by critics as environmental blights contributing to the world’s plastic pollution problem.

Cities and states are increasingly banning one of Dart’s signature products, foam food and beverage containers, which can harm fish and other marine life. In December, Gov. Andrew M. Cuomo of New York proposed a statewide ban on single-use food containers made of “expanded polystyrene” foam, more commonly, but inaccurately, known as Styrofoam. (Styrofoam is a trademarked material typically used as insulation.) Maine and Maryland banned polystyrene foam containers last year, and nearly 60 nations have enacted or are in the process of passing similar prohibitions. Some elected officials and environmental groups say polystyrene containers are difficult to recycle in any meaningful way.

“There is overwhelming evidence that this material is seriously damaging the earth,” said Brooke Lierman, a Maryland lawmaker who sponsored her state’s ban. 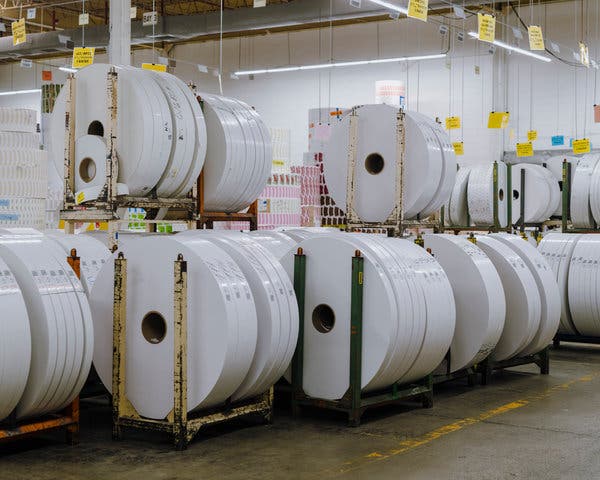 But Dart Container, which has been owned by the Dart family since its founding in 1950s, is not backing down. While many plastics companies work to protect their product through trade groups and feel-good marketing campaigns, Dart is challenging regulation directly and aggressively.

Shortly after Maryland voted to ban foam, Dart shut down its two warehouses in the state, displacing 90 workers and sending a signal to other locales considering similar laws. San Diego recently decided to suspend enforcement of its polystyrene ban in the face of a lawsuit by Dart and a restaurant trade group, which argued the city should have conducted a detailed environmental impact study before enacting the law. The city is now performing that analysis.

“We don’t believe there are good, objective reasons to single out certain materials,” Dart’s chief executive officer, Jim Lammers, said in a recent interview at the company’s headquarters.

The interview was one of the first times Dart had allowed a journalist broad access to its facilities on a leafy campus in Mason, where there are running trails, a garden honoring employees and boulders inscribed with words like “Meritocracy.”

Dart is waging a broader campaign to argue that its products are being used as scapegoats for a society fueled by on-the-go consumerism. Dart says that critics of polystyrene are ignoring the negative environmental impacts of other products, like many paper cups, which are derived from trees and can emit greenhouse gases as they degrade in landfills. By Dart’s reasoning, most materials inflict some negative impact on the environment, so it doesn’t make sense to ban one and not another.

“If you just give up on foam,” said Michael Westerfield, director of recycling at Dart, “what are they going to want to do next?”

The backlash against foam is taking its toll. Polystyrene foam sales have been declining, and the company has been broadening its offerings to include more paper products, including coffee cups sold at Starbucks and Dunkin’. It is also experimenting with containers that can be composted or fashioned from recycled content.

Today, foam makes up only a fifth of all the products that Dart sells. The company says overall sales of food and beverage containers, which generate $3 billion in annual revenue, are essentially flat.

Even as the market for polystyrene shrinks, many environmental groups want to abolish foam entirely because if it ends up as litter, it can break down easily into small pieces, harming fish and animals that ingest it. For humans, plastic fibers have been found in everything from drinking water to table salt, though the long-term health consequences are still being studied.

Industry and academic experts are still debating how best to quantify the long-term impact that single-use containers made from varying materials — plastics, paper, glass — can have on climate change. But the harm that plastic pollution can inflict on marine life is immediate, environmentalists say.

“A paper cup, as far as I know, has never killed any sea creatures,” said Jan Dell, an engineer who used to work in the plastics industry and now runs the Last Beach Cleanup, an advocacy group focused on plastic pollution.

The same properties that can make foam an environmental problem also make it profitable to manufacture. The costs are low because foam is 95 percent air and can be made using relatively little raw plastic.

William A. Dart did not invent foam cups, but he did master their mass production.

After returning from World War II and graduating from the University of Michigan, Mr. Dart spent a year working for the DuPont chemical company. In the late 1950s, brimming with ideas about plastic, he returned to his father’s welding factory in Mason, a small city next to Lansing. Mr. Dart began experimenting with creating cups from polystyrene, a material with seemingly magical insulating properties that would serve the growing fast-food industry.

Chick-fil-A was one of Dart’s first major accounts. The company also sold its plastic to hospitals and schools, sports stadiums and the food service giants Sysco and US Foods.

The company celebrates its long history of manufacturing in the United States. While many American factories moved to Asia in search of cheaper workers, foam cannot be imported profitably from overseas; the cost of importing the lightweight containers would offset any savings in labor, Dart says.

Mr. Lammers said the company was growing frustrated with the intensifying blowback against foam.

“Food and beverage packaging, like a lot of things in life, is not a sound-bite discussion,” said Mr. Lammers, who joined the company in 1986.

A lawyer by training, Mr. Lammers shuttles around Dart’s sprawling corporate campus in Mason in a blue Honda Accord. He proudly walked a reporter through a small museum in the lobby where single-use plastic products are arrayed like fine art. One display charts the history of the clam shell container. Another shows coffee lids through the years. It is a shrine to the throwaway items of everyday life: blue coffee cups with the Greek-style design and tiny clear plastic cups found in dentists’ offices. Dart makes them all.

The one area that was off limits was Building No. 1, where the white foam cups are made. The company says the foam machinery, designed by Mr. Dart in the 1950s and refined over decades, is such a closely guarded secret that only select employees and customers are allowed on the factory floor.

His sons Robert and Kenneth Dart have been involved in running the company, to varying degrees, since the 1980s. Kenneth, who renounced his American citizenship, decamped to the Cayman Islands and now develops real estate there. He’s worth an estimated $5.8 billion, according to Bloomberg. Robert also renounced his citizenship and relocated to London, where he still lives. The Dart brothers’ moves partially spurred the Senate to propose a law in the 1990s closing a tax loophole for expatriates.

Although the two brothers are no longer involved in the container company’s daily operations, they serve on the board and provide advice on “major capital expenditures and strategic decisions,” a Dart spokeswoman said in a statement. A third brother, Thomas, ended his involvement with the company in the 1980s, Dart said.

In 2012, Dart acquired another Midwestern container company, Solo, for $1 billion. The deal greatly expanded Dart’s product line into more paper and rigid plastic containers like the Solo cups that are ubiquitous at college keg parties and football tailgates.

Yet even as it diversified, Dart never gave up on polystyrene foam.

For years, the company has emphasized how polystyrene foam can be recycled, just like some other forms of plastic containers. The problem is that most communities do not accept foam in municipal recycling systems because it can be difficult to find buyers willing to pay enough money for the used material. So Dart offers to collect and transport the used foam containers for cities at no cost.

But it takes considerable energy to transport and recycle foam, as shown by a visit to a new recycling facility that Robert Dart has helped develop in Indianpolis.

The warehouse is filled with large bricks of crushed foam cups and egg cartons that have been transported there by truck or train from as far away as Canada and California. The foam is sorted and shredded into small pieces and then resold.

Foam food containers cannot be turned into new containers because health regulators have not approved them for such use, Dart says. Currently, the most common uses for the recycled polystyrene include picture frames and plastic rolls that spool out cash register receipts.

Dart says it’s possible that used polystyrene could eventually be made into new drinking cups en masse, but right now there is limited collection and processing capacity.

“We’d love to get there,” said Mr. Westerfield, the recycling director.

And some communities doubt they ever will. Growing up in Baltimore, Claire Wayner and her family used to haul their egg cartons and foam packaging to a drop-off site that Dart supported in the city. Volunteers in the local schools used to wipe down macaroni and cheese remnants and cheeseburger juices from hundreds of foam lunch trays and drive them to the recycling site.

Despite all of these good intentions, Ms. Wayner wondered how much of the city’s polystyrene was actually being recycled and questioned how large the market was for used foam beyond niche products like picture frames.

“It seems so random and ridiculous,” said Ms. Wayner, who is now a sophomore at Princeton University.

In high school, Ms. Wayner and other students started Baltimore Beyond Plastic, a group that convinced school officials to remove the foam lunch trays from the city’s public schools.

The student group, working with other environmental activists, then pushed successfully for a citywide ban on foam food containers. After the vote, Dart closed the recycling drop-off location it supported in Baltimore.

Asked about the closing, the Dart spokeswoman Becky Warren said in a statement, “We invest our recycling resources in communities that support our customers and our company.”

To Ms. Wayner and others, the move showed that Dart did not truly consider polystyrene recycling a viable enterprise, but rather a bargaining chip to ward off regulation.

“As soon as they lost, it was like they took their marbles and went home,” said Martha Ainsworth, a volunteer leader with the Sierra Club in Maryland.

Even with the foam ban, Baltimore still faces challenges in achieving its sustainability goals. The Baltimore schools now serve lunch on compostable trays. But there are no facilities in the city that can compost material commercially so the trays are sent to landfills or an incinerator, according to a spokeswoman for the city school system.

Dart executives say many of their customers also want more sustainable containers, but are facing the financial realities. Some food and beverage companies, they said, want containers made from more recycled and compostable material, but not everyone is willing to accept the additional costs.

Last year, the company opened a laboratory in Mason, where chemists wearing white lab coats and blue rubber gloves hover over beakers and reactors. In one room, technicians tested new coatings for paper coffee cups that are not made of plastic. In another, they analyzed soil samples to test how quickly a compostable cup breaks down.

It’s not clear how long it will take before some of these experiments result in marketable products, but Mr. Lammers said “it is close.”

“I guarantee you we are going to be different 10 years from now,’’ he said.