The filing against the San Diego congressman comes as the Justice Department moves forward with charges against him and his wife that allege the couple misspent more than $200,000 in campaign funds on personal trips and expenses over several years.

Margaret Hunter pleaded guilty earlier this month to a corruption charge and has agreed to testify against her husband. She is scheduled to be sentenced in September.

US REP. HUNTER BLAMES ‘DEMOCRAT PROSECUTORS’ FOR HIS INDICTMENT ON CORRUPTION CHARGES 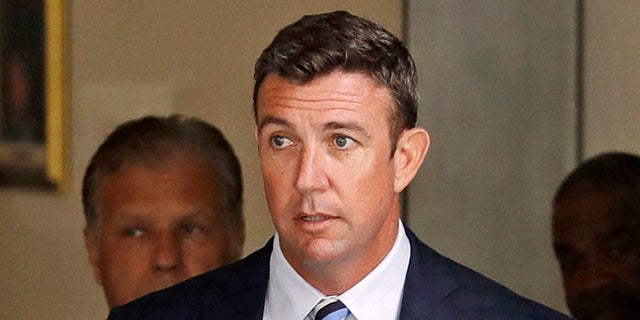 In this Aug. 23, 2018, file photo, Rep. Duncan Hunter, R-Calif., leaves an arraignment hearing in San Diego after he and his wife, Margaret, pleaded not guilty to charges they illegally used his campaign account for personal expenses. (AP Photo/Gregory Bull, File)

The Monday filing alleges Hunter spent campaign money to fund trips, hotel rooms, bar tabs, Uber rides and meals during his meetings with several unidentified women. In one case, Hunter flew to Reno, Nevada in January 2010 to ostensibly to attend a convention for a nonprofit group. After stopping at the convention, Hunter and a female lobbyist traveled to a ski resort in Lake Tahoe.

He billed his campaign $1,008 for the hotel stay and room service and another $180 to fly back to Washington D.C.

In March 2010, he also took a “double date” road trip with the same lobbyist to Virginia Beach, according to federal prosecutors. He spent $905 in campaign funds to pay for a bar tab and shared hotel room for the weekend, the filing said.

A spokesman for Hunter did not immediately return a Fox News request for comment on the allegations.

In another example, Hunter allegedly charged his campaign $93 to take a congressional aide out for drinks and billed another $21 for an Uber ride back to his office.

Hunter has called the case against him a political ploy and has denied corruption allegations. He previously said his wife handled his campaign’s finances.

The filing did not say whether Hunter’s relationships with the women were sexual. Prosecutors did say the “sequence of romantic liaisons is so far removed from any legitimate campaign or congressional activity as to rebut any argument that Hunter believed these were proper uses of campaign funds.”

Hunter, an Iraq War veteran and early supporter of President Trump who represents solidly Republican areas in San Diego and Riverside Counties, won re-election last year despite being under indictment on corruption charges.