A South Korean soccer club was fined a record $82,000 on Wednesday for using sex dolls in the stands in place of real fans because of the coronavirus pandemic keeping spectators out of stadiums.

FC Seoul received the 100 million won fine after using about 20 sex dolls in stadium seats. The club had some of the dolls dressed in team colors and holding up placards supporting the team in their K-League matchup against Gwangju FC.

“The controversy over this ‘real doll’ incident has deeply humiliated and hurt women fans, and damaged the integrity of the league,” the K-League said in a statement, according to The Guardian. 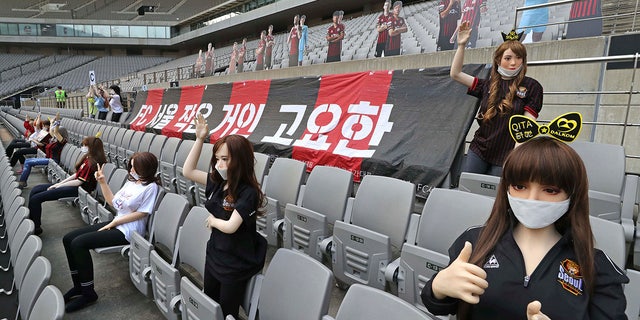 FC Seoul was fined for the use of sex dolls in the stands. (Ryu Young-suk/Yonhap via AP)

Fans began to post their suspicions about the dolls on social media during the match, as one of the banners showed the names of an adult toy manufacturer and of models who had been inspired by the dolls, according to the Yonhap news agency. Such advertising is banned in the K-League.

The club has since issued an apology over the incident.

“We apologize deeply to all those concerned about the unfortunate situation that occurred,” the club said. “We will review our internal procedures to ensure this does not happen again.” 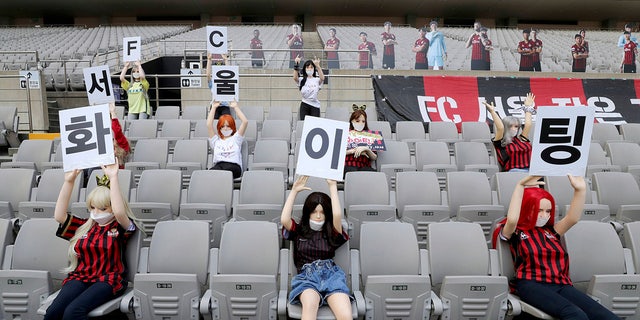 Cheering mannequins are installed at the empty spectators’ seats before the start of the soccer match between FC Seoul and Gwangju FC at the Seoul World Cup Stadium in Seoul, South Korea. (Ryu Young-suk/Yonhap via AP)

South Korean professional sports were the first to return to play amid the coronavirus pandemic. The K-League and the Korean Baseball Organization were among the first to start playing again.

The K-League was the first major soccer league to return. In their first match on May 8, the game attracted 19 million viewers worldwide.