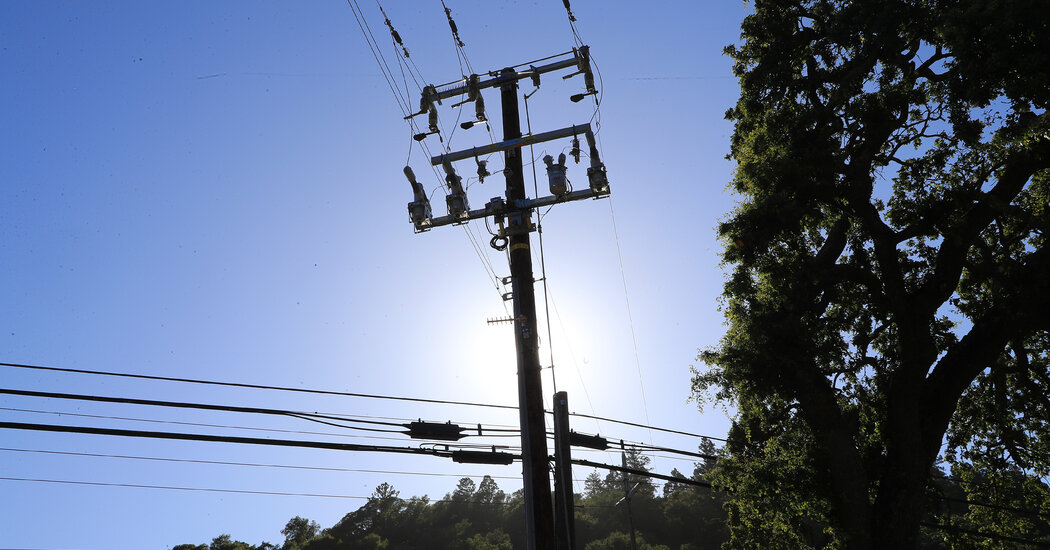 Lawmakers and consumer groups expressed outrage on Monday that the operator of California’s electricity grid had not adequately prepared for a heat wave and was resorting to rolling blackouts.

The blackouts, which started on Friday and were set to continue into Monday night, were reminiscent of an energy crisis 20 years ago, when the state’s botched deregulation of the electricity system left millions of people in the dark and drove the wholesale price of power skyward.

Gov. Gavin Newsom demanded an investigation into why state regulators had failed to prepare for high temperatures, which had been forecast for days.

“These blackouts, which occurred without prior warning or enough time for preparation, are unacceptable and unbefitting of the nation’s largest and most innovative state,” Mr. Newsom, a Democrat, said in a letter Monday to the state’s three major energy agencies.

[Sign up for California Today, our newsletter from the Golden State.]

Soon after he sent the letter, the state’s electric grid manager, the California Independent System Operator, ordered utilities like Pacific Gas & Electric and Southern California Edison to black out as many as 3.3 million people starting as early as 4 p.m. Pacific time to reduce demand for power.

Steve Berberich, president and chief executive officer of California I.S.O., said the system could be short about 4,400 megawatts of power in the late afternoon. “It’s going to be highly disruptive to people,” Mr. Berberich said. “We’re going to do everything we can to narrow that gap.”

Sweltering weather has smothered much of the West over the last week and is expected to strain the electric grid that serves about 80 percent of California. Temperatures in Death Valley reached 130 degrees.

The heat is expected to continue through Wednesday evening. The governor, the grid operator and utilities have been asking consumers to reduce electricity use between 3 and 10 p.m., when power demand typically peaks in the state.

People who lose power can expect to go without it for an hour at a time during some of the hottest stretches of the day. The blackouts could also disrupt learning for many students who began their first day of virtual classes on Monday because of the coronavirus pandemic.

Last year, Pacific Gas & Electric, the state’s largest utility, shut the power off to millions of customers, some for days, to reduce the risk that its equipment would set off wildfires.

To increase the supply of electricity, Mr. Newsom has ordered PG&E and Southern California Edison to use backup generators that the utilities installed for when they cut off power as a fire prevention tool. Wildfires have already burned tens of thousands of acres in the state this summer.

Mark Toney, executive director of the Utility Reform Network, which represents consumers before the California Public Utilities Commission, called on lawmakers to investigate California I.S.O. to determine why the agency did not adequately prepare for the heat wave.

“Why did they not do a better job of managing the grid, which is their job?” Mr. Toney said.

“It failed to produce when called on,” Mr. Hill said. “There’s something wrong, and it’s up to the Legislature and the governor to find out.”

Separately, California I.S.O. said that as the wind slowed across much of the state on Saturday, power from wind turbines dropped sharply. And a second gas plant could not keep generating the electricity officials were expecting.

The Federal Energy Regulatory Commission has been monitoring California’s energy troubles. The commission said it had discussed the electricity demand and wholesale power prices, which spiked in California over the weekend, with California I.S.O.

On Saturday, wholesale prices on California’s electricity market surged, some above $3,800 per megawatt-hour, or roughly 100 times the typical cost of transmitting power over a designated stretch of transmission line.

The last time prices surged that much was in 2000 and 2001 after California allowed utilities, Wall Street banks and other players to trade electricity more freely with one another. Investigators determined that policymakers had done a poor job deregulating the energy system and that traders from companies like Enron had manipulated the market to drive up prices and generate handsome profits.

Utilities like PG&E were forced to pay high wholesale prices for power or black out customers. In 2001, PG&E sought bankruptcy protection in part because of the state’s energy crisis. The company recently resolved another bankruptcy, this one caused by its wildfire liabilities.

Federal and state policymakers put safeguards in place to restore order. But some experts said the recent blackouts and spike in power prices suggested that the system still had weaknesses.

“Electricity is an essential service and shouldn’t be subject to this type of profiteering, especially during the pandemic,” Mr. Toney said.

Mr. Berberich said California I.S.O. was exploring the use of existing power plants that were not in service to help meet high demand in the days and weeks ahead.

California is struggling to meet its electricity needs because other states, which provide about 25 percent of the power it uses in a year, are also seeing record demand.

“We have a perfect storm going on here,” Mr. Berberich said. “What we have is a situation where the entire region is more than hot. It’s extremely hot.”