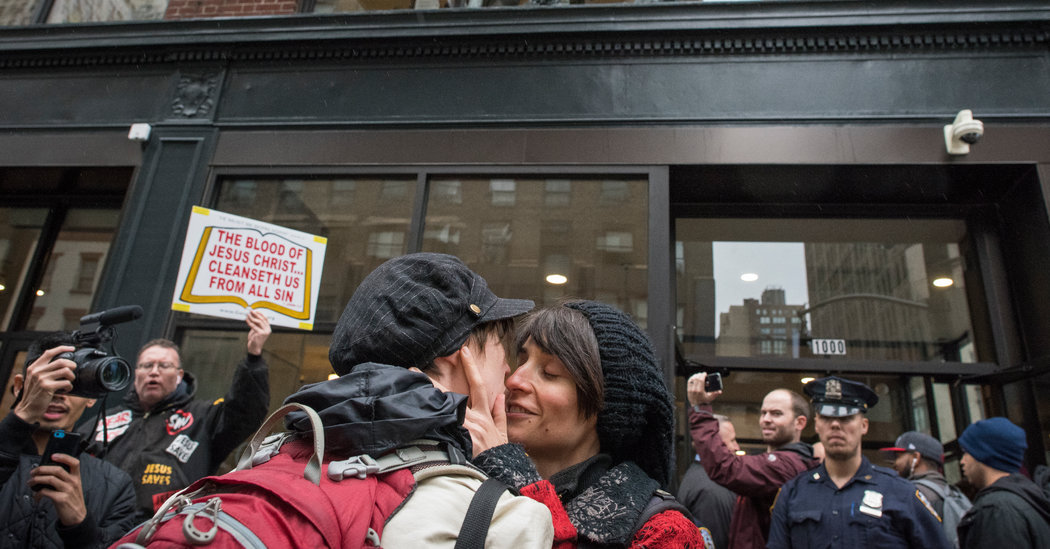 Chick-fil-A said on Monday that it had stopped making charitable donations to the Salvation Army and the Fellowship of Christian Athletes, groups that have been widely criticized by advocates for lesbian, bisexual, gay and transgender rights.

The fast-food chain, a longtime target of L.G.B.T.Q. rights groups because of its stance on gay marriage, has met resistance in recent months as it has looked to expand in the United States and other countries.

Chick-fil-A had to cancel the opening of a restaurant at the Buffalo airport in March after local politicians objected to it, and it cut short its plans for a British expansion last month when activists organized a boycott of its first outlet there. In September, the grand opening of Chick-fil-A’s first international location, in Toronto, was met with protesters who chanted, “Shame!”

Equal rights advocates described Chick-fil-A’s decision to stop funding the charities as a positive step but called on the chain to do more.

On Monday, Chick-fil-A released a list of organizations to which its foundation has donated this year. The list did not include either organization, even though the groups had received millions of dollars from the foundation over the years.

Chick-fil-A had made “multiyear commitments” to the Salvation Army and the Fellowship of Christian Athletes that ended in 2018, a company spokeswoman said. Now, she said, the company plans to give to “a smaller number of organizations working exclusively in the areas of hunger, homelessness and education.”

In an interview with the news website Bisnow, the president of Chick-fil-A, Tim Tassopoulos, appeared to frame the decision as a response to the company’s critics.

But Chick-fil-A left open the possibility that it might resume donating to those organizations in the future. “No organization will be excluded from future consideration — faith based or non-faith based,” Mr. Tassopoulos said in a separate statement.

Chick-fil-A has faced widespread criticism from gay rights advocates since 2012, when Dan T. Cathy, the company’s chairman and chief executive, was quoted saying Chick-fil-A believed in the “biblical definition of the family unit.” Mr. Cathy commented after news reports revealed that the company’s foundation had donated millions of dollars to efforts to prevent the legalization of same-sex marriage in the United States.

Chick-fil-A ended nearly all its donations to groups opposed to equal rights for people of different sexual orientations in 2012. But since then, it has given money to the Salvation Army and the Fellowship of Christian Athletes. Last year, Chick-fil-A gave $1.65 million to the Fellowship of Christian Athletes and $115,000 to the Salvation Army, according to tax filings.

The Fellowship of Christian Athletes did not respond to a request for comment. A spokeswoman for the Salvation Army said the organization was “saddened to learn that a corporate partner has felt it necessary to divert funding.”

“We believe we are the largest provider of poverty relief to the L.G.B.T.Q.+ population,” said Alex Yap, the Salvation Army spokeswoman. “When misinformation is perpetuated without fact, our ability to serve those in need, regardless of sexual orientation, gender identity, religion or any other factor, is at risk.”

“While this is an important step for Chick-fil-A, the company still does not have workplace protections and policies that are fully inclusive of L.G.B.T.Q. people,” said Beck Bailey, the director of workplace equality at the Human Rights Campaign Foundation, an arm of the largest L.G.B.T.Q. rights group in the United States.

Just days after Chick-fil-A’s first British restaurant opened in October, the chain said it would close the site in six months amid protests led by a group called Reading Pride.

Martin Cooper, the chief executive of Reading Pride, said Chick-fil-A’s decision to stop donating to the Salvation Army and the Fellowship of Christian Athletes had not changed the group’s position.

“It is only a step,” he said. “It’s not an action that allows us to fully forgive.”