There were two celebrity cameos, one trailer and no scheduling announcements.

So who’s ready to buy some commercial time?

Every year, NBCUniversal holds a star-spangled showcase at Radio City Music Hall to get advertisers in the mood to buy commercial time for the fall TV season.

On Monday, amid the coronavirus pandemic, it was a very different scene.

Linda Yaccarino, NBC’s head of advertising, led a livestream presentation while seated at home in front of a neutral flower arrangement. “Obviously, this isn’t where we expected to be this week,” she said to the advertisers who had clicked on a private link for the NBCUniversal website.

The springtime showcases, referred to as “upfronts,” normally give TV executives a chance to play the host at grand locations like Carnegie Hall and the Beacon Theater. The events kick off the schmoozefests that help the networks secure more than $9 billion in ad money for prime-time shows and live sports.

This year, media companies are just hoping to remind advertisers that they still exist. Fox announced a tentative fall schedule on Monday but canceled its big showcase. The Walt Disney Company, owner of ABC, also scrapped its annual shindig in favor of several smaller presentations for ad buyers. CBS will host a pair of digital presentations next week.

“Today is not our programming announcement for what will happen,” Mark Marshall, a president of ad sales at NBCUniversal, said during the Monday videoconference. “Because we just don’t have a crystal ball of how exactly everything is going to happen.”

The 2020 Summer Olympics, scheduled to air on NBC, have been postponed a year. Hollywood productions have been shut down, and it is not clear if the networks will have much fresh fall programming. Ms. Yaccarino alluded to the fact that “Sunday Night Football,” an NBC staple, is still up in the air when she said, “Once we know the details about Sunday nights, you’ll be the first to know.”

News on the advertising front is grim. The research firm eMarketer estimated that companies will spend between $24 billion and $26 billion on TV ads in the first half of the year, potentially $10 billion less than the first six months of 2019.

Executives used Monday’s presentation to discuss NBCUniversal’s moves to cut back on ad time. The company also talked up its efforts to make ad placement more targeted, in part by using audience data.

Before the pandemic, traditional TV was under pressure from Netflix and other streaming platforms. Last week, NBCUniversal announced that all employees making more than $100,000 would get a pay cut and that senior leaders would take a 20 percent reduction in salary.

“This industry, it’s changing no matter what,” Ms. Yaccarino said. “It’s just happened much faster than any of us expected.”

NBCUniversal executives stressed that advertisers didn’t have to lock in ad time during the usual upfront period, given the questions hanging over the fall schedule, and ad buyers seemed content to wait.

“There shouldn’t be any big deal-making going on right now,” said Carrie Drinkwater, who runs investment for the Mediahub agency. “It might be foolish to try to make a deal and not know what you were making a deal with.”

NBC had only one trailer to show, for “Mr. Mayor,” a sitcom that was co-created by Tina Fey and stars Ted Danson as a hapless billionaire who becomes the mayor of Los Angeles.

The celebrity quotient during the livestream — usually a key component at upfronts — was muted. Kelly Clarkson, the host of an NBCUniversal syndicated talk show, opened the presentation from her home in Montana. Milo Ventimiglia, a star of “This Is Us,” also made a cameo.

Springtime in the TV industry usually means dinners, parties and showcases. Last year, NBC rented out the Pool and the Grill restaurants in the Seagram Building. The William Morris Endeavor agency usually hosts a cheek-by-jowl dinner at Peter Luger. ABC books Tavern on the Green. Fox hosts a dance party at the Wollman Rink in Central Park.

“There was glitz and glamour, sure, but also there were good conversations that you’d have at dinners and breakfasts, the human interaction that helped you understand what your clients’ needs were,” she said.

Will the old-style upfronts be back?

“I don’t think the upfronts are dead, but they may change their focus,” Ms. Sullivan said. “Whether they need to be at Radio City or Carnegie will be determined.”

NBC Makes a Nostalgic Pitch to Advertisers at Radio City 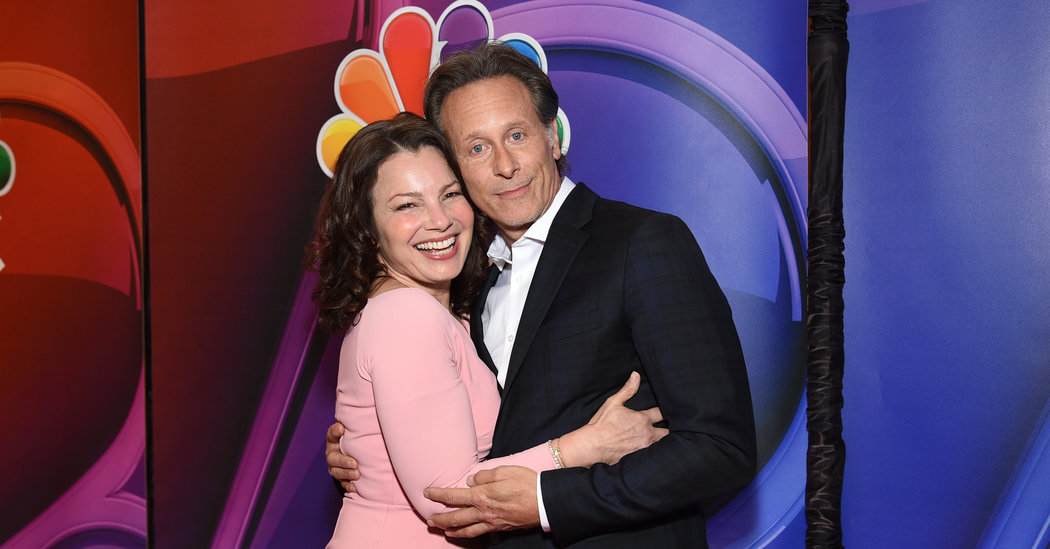 The TV industry is unveiling its coming season to advertisers in Manhattan this week, at a series of events known as the upfronts. Three New York Times media reporters — John Koblin, Michael M. Grynbaum and Edmund Lee — assess the NBC presentation at Radio City Music Hall on Monday, the first from the four major broadcast networks.

JOHN What a strange start to upfront season. Usually the springtime ritual means 70 degrees, a little sun. Today we were greeted with downpours and a belated winter chill. Advertisers in front of me were complaining that they bothered to wear suits and dress shoes. And while NBC trotted out the Kardashians, “S.N.L.” cast members and Rachel Maddow at Radio City, TV writers were at war with their talent agents, which prompted a string of party cancellations.

EDMUND I’ve been covering upfronts for a decade and I have to say, NBC’s extravaganza looked the same as always. But compared to other blowout media affairs I’ve seen recently, NBC made the best use of the Radio City stage. Google’s YouTube did its version of an upfront on May 2 — full of young fans — and HBO premiered the final season of “Game of Thrones” there last month with a wonky sound system. Score one for the National Broadcasting Co.

MICHAEL While NBC’s ad sales chief Linda Yaccarino promised to “future-proof this industry” — whatever that means — the prevailing mode was nostalgia. It opened with a tribute to legendary TV ads (few of which aired after 2005) and a pledge to syndicate old friends like “Jerry and Elaine” on NBC’s as-yet-untitled streaming service. In other words, “Make It 1997 Again Through Science or Magic.” One pitch that got ad execs buzzing was “Para-Norma,” a new Tina Fey project about a woman who investigates ghost murders. Oh, wait! Tina was just kidding. But let’s face facts: we’d watch that.

EDMUND He was there! For the first time in at least five years! That’s a notable signal of his rehabilitation since he got suspended in 2015 for exaggerating a few personal anecdotes. (How quaint.) Worth adding that Andy Lack, the head of NBC News, is friends with Williams.

MICHAEL I liked seeing the freshly Oscared Rami Malek effusively praise “Mr. Robot,” on NBCUniversal’s USA channel, for jump-starting his career and say he can’t wait for the next and final season. Showing Constance Wu how it’s done!

EDMUND What’s with all the musicals? Two of the fall-season shows featured song-and-dance schtick. The title character in “Zoey’s Extraordinary Playlist” can hear other people’s thoughts — as full-on choreographed musical numbers. There’s also “Perfect Harmony,” a Bradley Whitford vehicle where he plays a sad-sack former Princeton music professor who teaches a down-on-its-luck choir group to — well, you get the idea.

MICHAEL I’ll look for the infringement suit from “Mr. Holland’s Opus.” Meanwhile, judging by the Beatles song in the sizzle reel, the licensing rights alone must make “Zoey” the season’s priciest new show.

JOHN NBC went with the same message it always does: Feel-good programming that can make you laugh, cry, etc., etc. For a second straight year, the network also went hard on the Olympics, this time trotting out 13 female medal winners, including Lindsey Vonn and Tara Lipinski. That was good enough for a standing ovation (last year’s standing O went to the U.S. women’s hockey team).

EDMUND I was struck by Yaccarino’s announcement of a new start date for the NBC streaming service: mid-2020. Back in January, the target was the end of 2019. But the network made an important point: It will be one of the few ad-supported streaming services. Yaccarino also said that NBCUniversal spent $24 billion last year on content. That’s a lofty sum, given that Netflix spent somewhere between $8 billion to $10 billion, and CBS reached about $8 billion. It’s a content arms race.

JOHN Wonder if that’ll be the stat of the week — other than hearing who’s No. 1 — “We spend billions!” We hadn’t seen Jimmy Fallon at an upfront since his ratings slide began in earnest in 2017. He opened today’s proceeding with a spoof of the Apple “1984” commercial. But he didn’t say much: He introduced Yaccarino and promptly exited the stage, leaving Seth Meyers, a late-night host who’s No. 1 in his time slot, to get laughs from the crowd.

MICHAEL Were any of the new shows DVR-worthy? I was disappointed to learn that “Lincoln,” described as “a unique forensic procedural,” was not about Abraham Lincoln solving crimes.

JOHN It is based on the crime novel “The Bone Collector,” which was published in 1997 and made into a movie starring Denzel Washington and Angelina Jolie in 1999. Must See TV!

MICHAEL Fran Drescher of “The Nanny” (1993-1999) is returning for a show called “Indebted.” I’ll swear by Fran till the day I croak but I suspect this one won’t make it that long.

JOHN NBC executives are highest on that one! It’s a multi-cam show that looks like it could be on CBS …

EDMUND Do you guys still use a DVR? I think almost every NBC show I watch, I watch on Hulu: “Brooklyn Nine-Nine,” “The Good Place,” “Superstore.” All returning.

MICHAEL You don’t use a DVR? (Says the older millennial who refuses to cut the cord.)

JOHN I use a DVR!

EDMUND I never use it, since I’m usually catching things on Hulu, Netflix, HBO Go or Amazon. Speaking of which, Amazon was promoting its Emmy-winning “The Marvelous Mrs. Maisel” just outside the Radio City marquee. A woman in period costume was handing out black and white cookies. When I asked her why Amazon was promoting a show with no advertising outside an event packed with ad executives, a security guard interrupted, asking her to move along.

JOHN Whoa, dirty tricks from Amazon! And if we leave now, we can make it to the Beacon Theater for the Fox upfront.