Foie gras is back on California menus after a federal judge determined that it is not illegal to serve the delicacy if the dish is imported from out-of-state and transported by a third-party seller.

The feud over foie gras has a lengthy history in the Golden State, ever since lawmakers barred California farmers from producing the pate in 2004, The Associated Press reports.

Animal welfare activists who advocated for the ban argued that methods used to produce the rich dish are cruel, involving force-feeding a duck or goose a corn-based mixture through a tube down its throat. 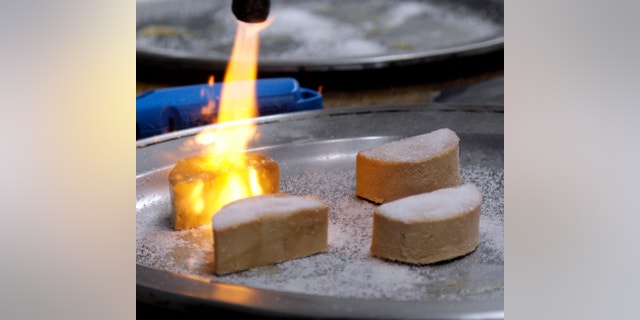 Foie gras is torched and made into a Brulee at the Sent Sovi restaurant in Saratoga, Calif. (AP Photo/Marcio Jose Sanchez, File)

Then, in 2015, U.S. District Judge Stephen V. Wilson ruled that state law contradicted the federal government’s Poultry Products Inspection Act, Eater Los Angeles reports. From there, the fattened bird liver could be sold and eaten – but not produced – in California.

In 2017, Ninth Circuit judges nixed the lower court’s decision and said that the Golden State could indeed ban foie gras on grounds of animal cruelty, per Eater.

Last year, the Supreme Court declined to hear the case, leaving the foie gras ban to stand for 18 months.

On Tuesday, Wilson again ruled in favor of the plaintiffs, including farmers in New York and Canada and New York. The litigants challenged part of the law that banned liver produced out of state from being sold. The judge said that the sale of foie gras doesn’t violate California law if the seller is out-of-state and the product is given to a third-party delivery service, then imported. 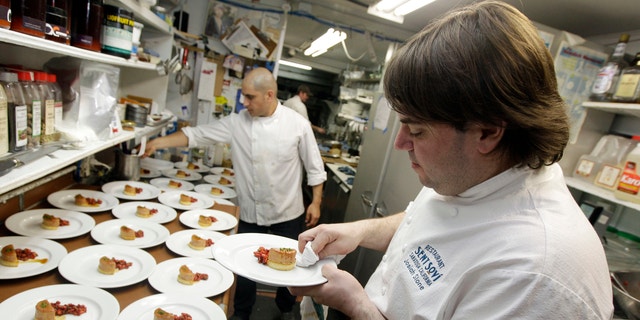 In this 2012 file photo, chef and owner Josiah Slone, right, prepares a foie gras dish at Sent Sovi restaurant in Saratoga, Calif. Foie gras is back on the menu in California after a judge ruled the rich dish can’t be prevented from being brought in from out of state. (AP Photo/Marcio Jose Sanchez, File)

“There is no principled way to distinguish between foie gras purchased out of state and transported into California by the purchaser and that which is delivered by a third party,” Wilson wrote, per the AP.

“We are gratified that the court recognized that California’s misguided ban was never intended to apply to foie gras products from out‐of‐state producers that are shipped to happy consumers in California,” said Marcus Henley, vice president of Hudson Valley Foie Gras, one of the plaintiffs.

The California attorney general’s office intends to review the decision.