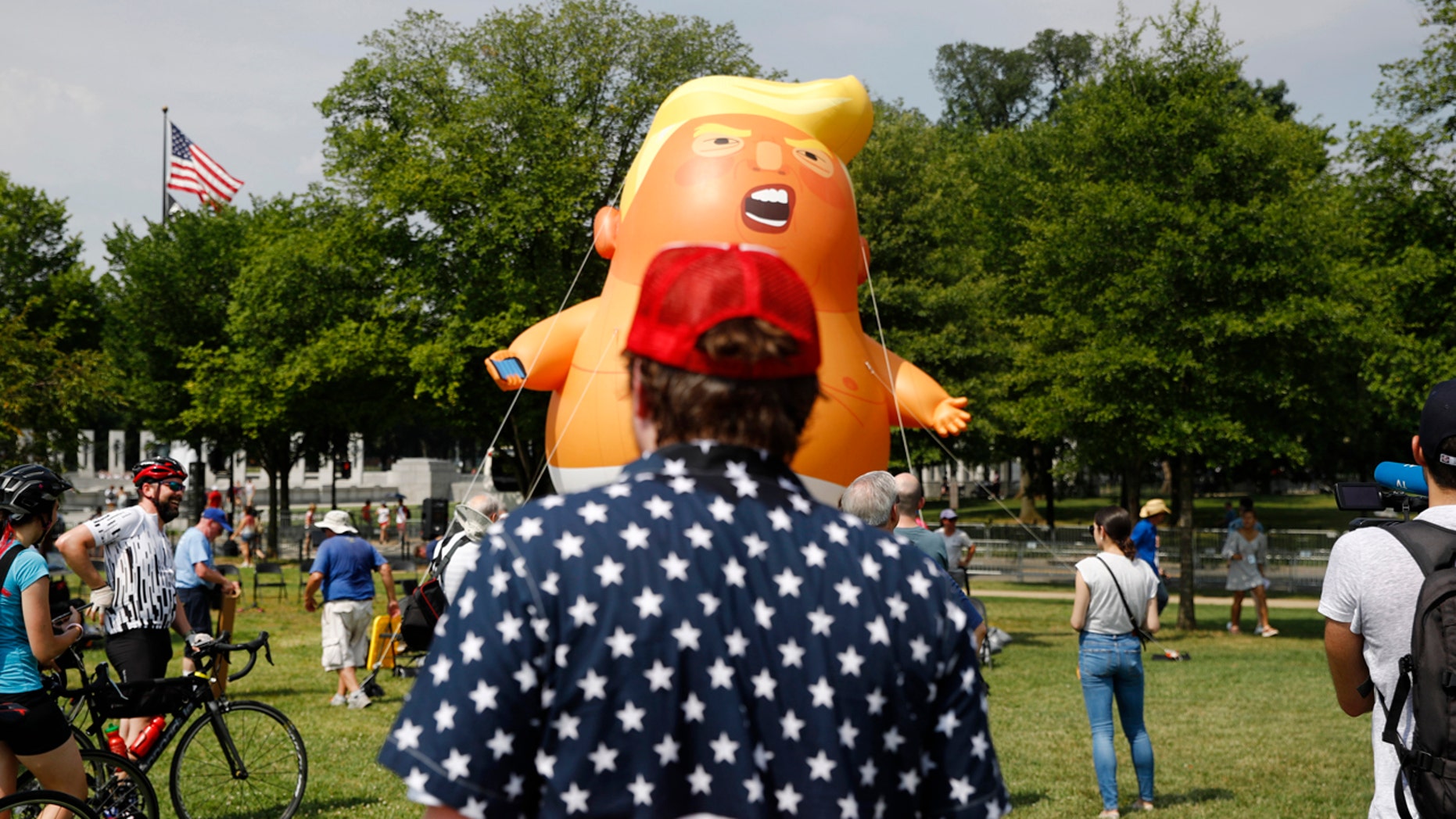 A man who gave his name only as “Schwartz,” foreground, of Greensboro, N.C., views a Baby Trump balloon as it is moved into position before Independence Day celebrations on the National Mall in Washington. (AP Photo/Patrick Semansky)

The antiwar organization Code Pink brought its 20-foot-tall, diaper-clad balloon of an infant Donald Trump to the Washington Monument on Thursday to protest the president’s planned “Salute to America” Fourth of July celebration.

Code Pink co-director Medea Benjamin said the organization and its members “oppose the politicization of the July Fourth holiday by President Trump.”

Trump has ordered the Pentagon to stage military demonstrations, including a flyover of jets, helicopters and other aircraft. Trump says he’ll “speak on behalf of our great Country” at his “Salute to America” event on Thursday evening.

Activists with Code Pink, however, argue that Trump’s event is “a campaign rally” and that its balloon is “a great symbol” because the president is “a big baby” and is “prone to tantrums.”

“We think that he is making this about himself and it’s really a campaign rally,” Benjamin said. “We think that he’s a big baby. … He’s erratic, he’s prone to tantrums, he doesn’t understand the consequences of his actions. And so this is a great symbol of how we feel about our president.”

The balloon remained tied down at the Mall because park officials restricted the group’s permission to move the balloon or fill it with helium, Benjamin said.

A small crowd gathered to take pictures with the balloon, which drew Trump supporters and detractors.

Kevin Malton, a Trump supporter from Middlesboro, Kentucky, came with his son for the holiday and took pictures with the balloon. He was glad to see the mix of political beliefs at the event, he said. “Even though everybody has different opinions,” he said, “everybody’s getting along.”

Code Pink isn’t the only thing threatening to dampen Trump’s “Salute to America” in the nation’s capital.

The National Weather Service has issued a flash flood watch for parts of the nation’s capital and the Maryland and Virginia suburbs hours before the Independence Day celebration on the National Mall is set to begin.

The watch is active until 8 p.m., which would stretch into the evening when President Donald Trump plans to speak from the Lincoln Memorial. Military flyovers also are on the schedule.

The Weather Service added that the storms are expected to develop early afternoon and there may be torrential rains and a chance of flash flooding.