HELSINKI, Finland — When they really wanted to rile up conservative voters this spring, the politicians from Finland’s nationalist party made a beeline for the rawest subject in this year’s general election.

No, not immigration. Climate.

As Finland’s other parties competed with each other to offer ambitious climate goals ahead of Sunday’s general election, the Finns Party has seized on climate as a new front in the culture wars, warning its conservative, working-class supporters that they are being betrayed by urban elites.

Aggressive environmental measures will “take the sausage from the mouths of laborers,” warned a Finns Party politician, Matti Putkonen, in a recent televised debate. And, more important, from dogs and cats, whose food, he said, would increase in price by 20 to 40 percent.

“What’re you going to say to the little girl or boy who cries when Mom and Dad say that they can’t afford it any longer?” he said. “And take the lovable pet to be put down?”

If that was not enough, he suggested contemptuously that, if the liberals got their way, dogs and cats would have to accept vegan substitutes for meat. 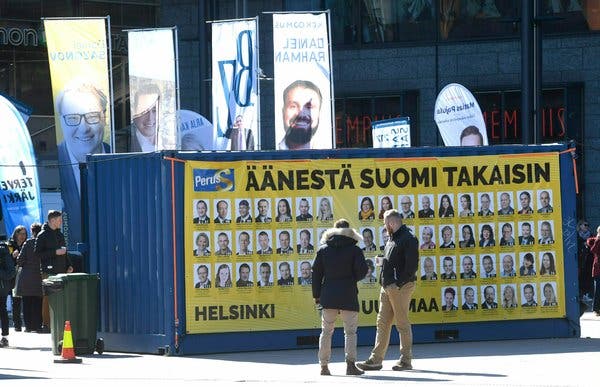 The Finns Party, which has taken a strident line against action on climate change, campaigning for parliamentary elections in Helsinki.CreditHeikki Saukkomaa/Lehtikuva, via Associated Press

“How long do you think,” he asked, “will it take for dogs, that is, Musti and Mirri, to learn how to switch to pulled oats?”

The anti-climate language, coupled with the party’s longstanding anti-immigrant line, has paid off. The Finns Party, which polled at just 8.1 percent last November, has risen in recent weeks to be the second most-popular party among prospective voters, with 16.3 percent support. According to Taloustutkimus, a market research firm, much of the surge has come from voters who did not take part in previous elections.

Finland’s general election has broken a well-established pattern in northern Europe, where one political cycle after another has been powerfully defined by the issue of immigration. In December, the Finnish authorities announced a series of cases involving accusations of sexual abuse and rape of girls by asylum seekers and refugee men, but it still did not become a central election issue.

Instead, much of the debate has been dominated by climate, with nearly every major party proposing its own plan to keep global warming to 1.5 degrees. The proposals have been wide-ranging and, in some cases, aggressive, like an eco-tax on meat and airfare and restrictions on logging. But this pivot did not marginalize the Finns Party, whose leaders discovered they could mobilize their electorate by casting climate policy as an elite agenda that would hurt ordinary people.

Some analysts, watching the Finns Party’s rise, have suggested that emphasizing climate has actually helped the right wing.

“Well-meaning people wanted to make these elections climate elections, but they only set the table for an election victory for the Finns Party,” wrote Saska Saarikoski, a political columnist for Helsingin Sanomat, on Twitter. “Could we learn something from this?”

It was a carbon tax, increasing the cost of fuel, that triggered France’s Yellow Vest protests.CreditThibault Camus/Associated Press

Already, many of Europe’s right-wing parties and movements have adopted similar emotional assaults on climate policy. It was a carbon tax, increasing the cost of fuel, that triggered France’s violent Yellow Vest protests. Germany’s far-right party, Alternative for Germany, has pushed back heavily against the science behind clean-air policy, which it has derided as “particulate matter hysteria.”

The lines clearly find an echo in Republican attacks on Alexandria Ocasio-Cortez and the Green New Deal in the United States, which portray liberal Democrats as Stalinists taking away people’s pickup trucks and hamburgers.

“No planes! No energy!” President Trump said in a speech to the Conservative Political Action Conference in February. “When the wind stops blowing, that’s the end of your electric. ‘Darling, is the wind blowing today? I’d like to watch television, darling.’ ”

Stella Schaller, who has studied populist parties and their approach to energy policy, said climate may well become “a new line of conflict in European society, when topics like migration lose their explosiveness and tension.” The rhetoric serves to undermine trust in government and international institutions, she said.

“They use identity-laden frames, such as national independence, the homeland, our nature and environment,” said Ms. Schaller, a project manager at Adelphi, a Berlin-based climate think tank. “They make it an emotional issue by fueling fears of rising energy prices and higher consumer costs. The way they communicate about this is dramatic and personal.”

With right-wing parties now holding 151 of the European Parliament’s 751 seats, and likely to increase their share in May elections, opposition to climate policy could become more mainstream.

A view of the landscape around Helsinki. Nearly nearly every major party is proposing its own plan to keep global warming to 1.5 degrees.CreditDmitry Kostyukov for The New York Times

“The danger is that the mainstream discourse shifts toward more simplistic, nationalistic language, and that centrist parties adopt populist frames,” Ms. Schaller said.

Finland’s case is instructive. With its energy-intensive paper and steel export industries, Finland has not traditionally been at the vanguard of environmental policy, said Tuomas Yla-Anttila, a lecturer in political science at the University of Helsinki.

But political discourse was jolted, last fall, by the release of the a landmark report by the United Nations Intergovernmental Panel on Climate Change, warning that without profound change, a warming climate could lead to food shortages, wildfires and a die-off of coral reefs much sooner than previously thought.

Young people in Finland were also powerfully affected by climate protests led by a Swedish teenager, Greta Thunberg, and journalists quickly began casting the upcoming election as Finland’s first “climate election.” The range of policy became clear in the first televised debates, where nine parties were represented. Eight of them eagerly offered their plans to keep global warming to 1.5 degrees.

And then there was Jussi Halla-aho, the chairman of the Finns Party, in vigorous, passionate dissent. His position is not to deny climate change, but to deny that Finland is obliged to make sacrifices to combat it.

“Climate hysteria wrecks the Finnish economy and industry, and it destroys the fruits of decades of work by citizens,” he said in a recent video blog on the subject, which went on to warn of “massive” fuel tax increases, “dramatic” tax increases on old vehicles, cessation of flights to Lapland and “overly ambitious” national goals that will “raise transport and heating costs to unbearable levels.”

“There has to be a limit to climate hysteria,” he continued. “Vote to get Finland back.”

Other Finns Party candidates have offered over-the-top variations on this message: “If every Finn shot himself, it would do nothing to stop climate change” (Juho Eerola, the party’s deputy chair); and “If Finns stopped driving cars, it would delay global Armageddon by one minute” (Kristian Laasko, a candidate in the southeast district of Kaakkois-Suomi).

With this line of argument, the Finns Party has been able to attract working-class males — eight in 10 of its voters are men — from the Social Democratic Party, the country’s traditional left-wing party. David Arter, a political scientist who has followed the party closely, said the Finns Party has “sought to exploit its ostracized status for electoral gain,” and the mainstream emphasis on climate change, an issue that does not resonate with male traditionalists, has played into its hands.

This argument only resonates with a small part of the electorate, Mr. Yla-Anttila said, but could still have a significant effect. With nine parties currently represented in Parliament, the most popular party will get only around 20 percent of the vote, and a swing of 1 to 2 percentage points could propel the Finns Party into second place.

Candidates for other parties said that a false narrative had taken hold. “There’s been a vast amount of disinformation in these elections,” said Anita Hellman, who was canvassing for the first time as a Social Democrat. The Finns Party, she said, had spread misconceptions about her party’s climate proposals, leading voters to believe that “the Social Democrats will come and rip your car out of your front yard.”

Daniel Sazonov, who is running as a member of the National Coalition Party, said he has been taken aback by voters’ strong feelings about climate policy, which he said extended far past the younger group generally associated with climate action. And that much being said, on both sides of the argument, was, as he put it, “extreme.”

“Climate,” he said, “is as polarizing among voters as immigration.”