WASHINGTON — President Trump has been consulting the Constitution. In a Twitter post on Monday, he recited part of Article II, Section 4, the provision that allows Congress to remove federal officials who commit “treason, bribery, or other high crimes and misdemeanors.”

Mr. Trump wrote that he had done none of those things: “There were no crimes by me (No Collusion, No Obstruction), so you can’t impeach.”

The president’s analysis had two shortcomings. It misstated the conclusion of the report issued by the special counsel, Robert S. Mueller III, which made no definitive judgment about whether Mr. Trump had violated criminal laws concerning obstruction of justice. And it failed to take account of what the framers meant by “other high crimes and misdemeanors.”

The phrase is vague, of course, but it plainly does not encompass every ordinary crime. Rather, it follows two offenses that give a good sense of the kinds of crimes the framers had in mind: treason and bribery. Those are crimes against the state and the justice system that undermine the ability of the government to function.

Constitutional scholars say that similar offenses — ones involving the lawless use of official power threatening the constitutional order — are what the framers thought could justify removal from office.

Does Mr. Trump’s conduct, as described in the Mueller report, clear that high bar? The two most recent impeachment proceedings, against Presidents Richard M. Nixon and Bill Clinton, indicate that it could.

The articles of impeachment in both cases identified one sort of presidential conduct that the Constitution cannot tolerate: the corrupt use of power to frustrate lawful investigations.

“The Nixon and Clinton cases prove beyond a shadow of the doubt that obstruction of justice can qualify as a ‘high crime and misdemeanor,’” said Joshua Matz, an author, with Laurence H. Tribe, of “To End a Presidency: The Power of Impeachment.”

Frank O. Bowman III, a law professor at the University of Missouri and the author of “High Crimes and Misdemeanors: A History of Impeachment for the Age of Trump,” to be published this summer, said the Nixon and Clinton cases were informative.

“The historical comparisons make out a solid case for an article of impeachment against Trump for obstruction of justice in both the technical legal sense and in the more general sense of an attempt to subvert American legal process and institutions,” Mr. Bowman said. 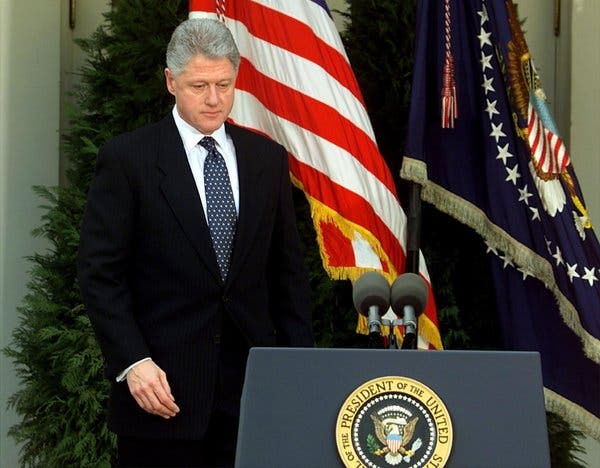 Impeachment, it has often been said, has a political component. “An impeachable offense is whatever a majority of the House of Representatives considers it to be at a given moment in history,” Gerald R. Ford said in 1970, when he was the House minority leader.

That may reflect the current political reality, too. Many House Democrats are wary of impeaching Mr. Trump because they know the enterprise would very likely be doomed. Impeachment is an accusation akin to an indictment, and it would be followed by a trial in the Senate, which is controlled by Republicans and where removal would require a two-thirds majority.

But if the question is one of constitutional principle, there is reason to think Mr. Trump was a little too sanguine in his analysis.

In 1974, the House Judiciary Committee adopted articles of impeachment against Mr. Nixon, accusing him of “interfering or endeavoring to interfere with the conduct of investigations” into the Watergate burglary.

Philip Allen Lacovara, who served as counsel to special prosecutors investigating Mr. Nixon’s role in the Watergate scandal, said reading the Mueller report evoked a sense of déjà vu. “The overarching concept of obstruction of justice parallels some of Nixon’s activities rather neatly,” Mr. Lacovara said.

Mr. Bowman said that “the similarities between Trump’s case and Nixon’s are sufficiently numerous and striking that they make out a strong case for Trump’s impeachment.” He ticked off examples.

“Both Trump and Nixon repeatedly lied to the public about the investigations,” Mr. Bowman said, noting that the articles of impeachment against Mr. Nixon relied on those public statements.

Mr. Nixon resigned rather than face what seemed like inevitable impeachment and removal, elevating Mr. Ford, by then vice president, to the presidency.

In 1998, the House impeached Mr. Clinton, saying he had “prevented, obstructed and impeded the administration of justice” in connection with a civil suit in a sexual harassment case and a grand jury investigation into his relationship with Monica Lewinsky, a White House intern. Mr. Clinton was acquitted by the Senate.

The accusations against Mr. Nixon and Mr. Clinton were quite different, of course, but both focused on obstruction of justice.

“In Clinton’s case, the pattern of conduct constituting obstruction involved a small cast of characters and a few discrete instances of wrongdoing, all centered firmly around his false testimony concerning Monica Lewinsky,” Mr. Matz said. “Nixon’s case was very different: he was accused of obstruction for dozens of acts, taken over several years and in a wide range of settings, broadly aimed at concealing the truth of the Watergate break-in.”

President Trump this month in Minnesota. His White House counsel expressly invoked a parallel to the Watergate investigation when he refused to convey an instruction from Mr. Trump to fire Mr. Mueller.CreditSarah Silbiger/The New York Times

Mr. Mueller’s report detailed conduct that was almost as varied as Mr. Nixon’s, if less effective.

“Our investigation found multiple acts by the president that were capable of exerting undue influence over law enforcement investigations, including the Russian-interference and obstruction investigations,” the report said.

“The incidents were often carried out through one-on-one meetings in which the president sought to use his official power outside of usual channels,” the report said. “These actions ranged from efforts to remove the special counsel and to reverse the effect of the attorney general’s recusal; to the attempted use of official power to limit the scope of the investigation; to direct and indirect contacts with witnesses with the potential to influence their testimony.”

Mr. McGahn said he did not want to be “Saturday Night Massacre Bork,” referring to Robert H. Bork’s role in the firing of Archibald Cox, the Watergate special prosecutor, on orders from Mr. Nixon. Mr. Bork’s superiors at the Justice Department had resigned rather than carry out Mr. Nixon’s instructions.

“As the Mueller report makes explicit,” Mr. Lacovara said, “the only reason why Trump was unable to complete the parallel with Watergate more precisely was that some of his aides, including the White House counsel, simply refused to obey his instructions.”

Mr. Nixon faced all but certain impeachment and removal because his aides followed his orders to obstruct justice. Had Mr. Trump’s aides done the same thing, Mr. Matz said, “the nation would have reached a constitutional crisis, and the case for impeachment would be overwhelming.”

“To be clear,” Mr. Matz added, “Trump may still have committed ‘high crimes and misdemeanors’ by seeking to obstruct justice, even if his own staff refused to carry out the plan. Internal insubordination has its limits as a defense to impeachment. When the president repeatedly gives orders that would merit impeachment if implemented, the nation is not required to cross its fingers and hope that White House advisers will ignore them.”

There were other parallels to the Watergate era, Mr. Lacovara said. “Nixon approved the arrangements to bribe witnesses and offered to take care of their families if they went to prison,” Mr. Lacovara said. “Trump urged witnesses not to cooperate, berated any witnesses who might be cooperating, and held out the prospect of pardons to protect anyone who got caught and who would refuse to cooperate with Mueller.”

A young lawyer named Brett M. Kavanaugh studied the constitutional standard for impeachment when he worked on Ken Starr’s investigation of Mr. Clinton. Mr. Kavanaugh, who now sits on the Supreme Court, helped draft a report to Congress setting out 11 possible grounds for impeachment.

Among them were a pattern of lying that frustrated investigations. Mr. Starr’s report said, for instance, that Mr. Clinton lied to his aides about his relationship with Ms. Lewinsky, “knowing that they would relay those falsehoods to the grand jury.” The report added that Mr. Clinton had lied to the American public in an attempt to head off an investigation.

Reflecting on investigations of sitting presidents in a 2009 law review article, Justice Kavanaugh, then a federal judge, said the Constitution provides a single mechanism to address presidential misconduct.

“The country needs a check against a bad-behaving or lawbreaking president,” he wrote. “But the Constitution already provides that check. If the president does something dastardly, the impeachment process is available.”