FRANKFURT — Car executives are paid to be optimists, but behind the pomp and salesmanship at the Frankfurt International Motor Show this week lurked an unmistakable sense of angst.

The talk among industry insiders at the show, one of the auto industry’s biggest events, reflected the existential threats that carmakers face.

The European and global auto markets are in decline. Carmakers are betting their futures on electric vehicles whose marketability is untested. Manufacturers are under intense public and regulatory pressure because of the role that vehicles play in climate change. The global trade war has disrupted supply chains.

Even auto shows are under threat. Many manufacturers scaled back their presence in Frankfurt this year or skipped the show altogether. Companies like Toyota and Fiat Chrysler decided the benefits didn’t justify the millions of euros it takes to put on a display.

“It’s an unprecedented situation we are in,” said Wolf-Henning Scheider, chief executive of ZF Friedrichshafen, a German transmission maker that has an extensive network of factories in the United States, Europe and China. 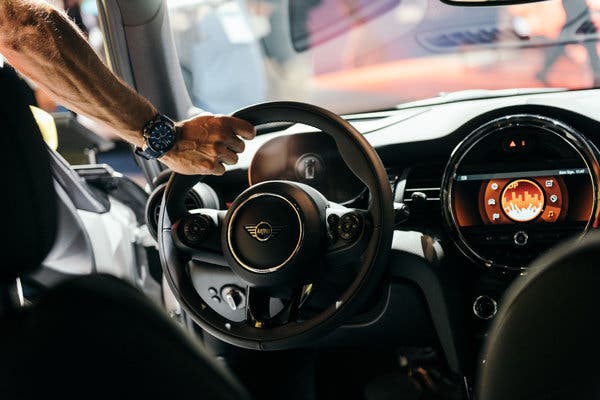 BMW is showing an electric Mini.CreditFelix Schmitt for The New York Times

Volkswagen is producing its ID.3 electric sedan with wind and solar energy.CreditFelix Schmitt for The New York Times

The Frankfurt show was as good a place as any to find out how auto executives plan to survive the tsunami. Here are some of the main takeaways.

Sustainability has become a matter of survival

Protests by environmental groups were especially intense this year, as carmakers increasingly take the blame for climate change. Volkswagen alone accounts for more than 1 percent of greenhouse gas emissions worldwide, according to the company’s own calculations.

This week Greenpeace activists stood on the roofs of S.U.V.s on display at the Frankfurt exhibition grounds with signs that chided, “Climate Killer.” The militant group Attac planned to blockade streets and bring traffic to a standstill on Saturday, the day the show opens to the public.

Carmakers are desperate to show that they get the message. Ola Källenius, chief executive of Daimler, said in Frankfurt that the company’s Mercedes-Benz factories will be carbon neutral next year.

Volkswagen is producing its ID.3 electric sedan with wind and solar energy, and offsetting any additional emissions by financing a project in the rainforests of Borneo. At an event this week to unveil the ID.3, guests were handed bamboo forks to eat hors d’oeuvres.

“We’re serious,” Herbert Diess, the Volkswagen chief executive, said during a debate with Tina Velo, a leader of Attac, who questioned the company’s commitment to the environment.

But carmakers still make most of their money from fuel-thirsty S.U.V.s. Nicolas Peter, chief financial officer of BMW, said the industry couldn’t solve its image problems with public relations alone.

“We have to do the right thing,” he told a small group of reporters on Tuesday.

Trade tensions are reshaping the industry

Carmakers are operating on the assumption that tensions between China and the United States won’t be resolved soon. They are rethinking their supply chains and moving production closer to customers so that fewer goods have to cross borders and be exposed to tariffs.

That applies to software as well as hardware. Mr. Scheider of ZF said that, for security reasons, autonomous driving technology developed for the United States has to be kept out of China and vice versa. “That is a risk, that these two regions drift apart,” he said.

Forced to choose, many companies would have to pick China. It has become by far the biggest car market, and several executives said they expected it to keep growing despite a recent decline in sales. Mr. Scheider pointed out that rates of car ownership were still low outside the major cities.

Electric cars are here, ready or not

A slew of mainstream carmakers unveiled battery-powered cars in Frankfurt that will sell at prices within reach of middle-class households.

The most important new product at the show is easily the ID.3, a four-door hatchback that Volkswagen said would be the first in a line of affordable battery-powered vehicles, including an S.U.V. and a minivan.

Honda unveiled an electric vehicle known simply as the E, and BMW showed an electric version of its popular Mini. Including incentives available in the United States, Germany and other countries, the end price of these vehicles should be 30,000 euros ($33,000) or less. Because electric cars have fewer moving parts and require less maintenance, the cost of ownership may be lower than for a conventional car.

Ola Källenius, chief executive of Daimler. He said the company’s Mercedes-Benz factories would be carbon neutral next year.CreditFelix Schmitt for The New York Times

But no one knows yet whether these vehicles will be popular enough to justify the investment and allow carmakers to meet European Union fuel economy targets that take effect next year. Carmakers that fail to deliver average fuel economy of 57 miles per gallon face draconian fines.

The end of internal combustion is nigh

Regret is written on the faces of auto executives’ faces when they say it, but the age of the internal combustion engine is slowly coming to an end.

“One is amazed at what can still be achieved with the internal combustion engine,” said Markus Schäfer, the head of research and development at Daimler. He added, however: “Of course the main focus is on electrification.”

Mr. Schäfer told a small group of reporters that Mercedes did not plan to develop any more internal combustion engines after it finished the rollout of a new four-cylinder motor, which is underway. “That is the last,” he said.

But battery-powered cars are likely to be less profitable for carmakers, which tend to operate on thin margins to begin with. Most make their own gasoline or diesel motors. They must buy batteries from suppliers like LG Chem of South Korea, Panasonic of Japan or CATL of China, which will keep a big chunk of the profits.

Batteries are getting better and cheaper

Batteries for electric cars have made rapid progress in the last decade, dropping in price and delivering more juice per pound than even a few years ago. The latest generation of the Renault Zoe can travel 395 kilometers, or 245 miles, on a charge, more than double the range of the first generation, which went on sale in 2012.

“In less than a decade, we already have done huge progress,” Gilles Normand, senior vice president for electric vehicles at Renault, said in an interview. “You can easily imagine what’s going to come in the next 10 years.”

Thierry Bolloré, the chief executive of Renault, said that the company was working on a €10,000 ($12,000) electric car. “We have a clear estimate that this is reachable, absolutely, and still make money,” Mr. Bolloré said during a news conference Tuesday.

Others are more pessimistic. The prevailing lithium-ion technology will probably reach its limits in five years, Mr. Schäfer of Daimler said. Further progress will rest on new technologies such as solid state batteries, which will weigh less and be easier to cool but are not yet ready for mass production. “We need a quantum leap in the technology,” Mr. Schäfer said.

An industry shakeout is coming

Some companies will adapt to new technologies, but some won’t be able to invest enough to stay competitive.

Mergers would be a way out for weaker companies, but those have proved difficult. Mr. Bolloré of Renault said in Frankfurt that there was no effort to revive the aborted deal with Fiat Chrysler.

“We are not talking to each other,” he told reporters. “The offer was on the table. It’s no longer on the table. That’s it.” Mr. Bolloré added that he regretted the merger hadn’t worked out.

The coming shakeout may be most brutal among suppliers, particularly smaller companies far down the industry food chain that supply specialized parts for combustion engines.

“Every downturn, there is a consolidation that takes place,” said Derek Jenkins, a former Mazda and Volkswagen executive who is senior vice president of design at Lucid, a California company that plans to begin producing a luxury electric car at the end of 2020. Lucid, backed by Saudi investors, is an example of the start-ups challenging the established carmakers.

“Brands disappear,” Mr. Jenkins said in an interview. “That will happen in the next downturn cycle.”