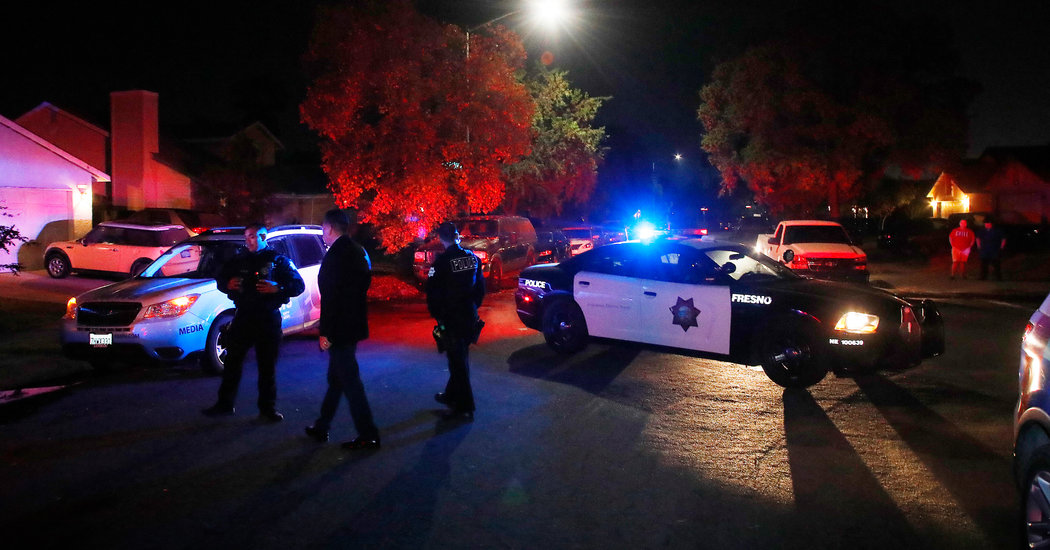 [Sign up for our daily newsletter about news from California here.]

Four people were fatally shot and six others wounded after at least one gunman opened fire on a backyard party in Fresno, Calif., on Sunday, then fled, the authorities said.

The motive and number of assailants was unknown, and no arrests had been made, the police said.

About 35 friends and family at the home were watching a football game in the backyard when an unknown number of gunmen opened fire into the crowd, said Michael Reed, a deputy chief of the Fresno Police Department. The authorities received reports of the shooting around 8 p.m. local time.

[Fearing a mass shooting, police officers in the Seattle area took a man’s guns. A judge gave them back.]

Mr. Reed said all 10 of the victims were Asian men between 25 and 30 years old, but several children were at the party.

“Thank God that no kids were hurt,” he said.

Mr. Reed said three of the men died in the yard, and one died after being taken to a nearby hospital. Six others were taken to hospitals with non-life-threatening injuries, he said.

As of Monday morning, the police had not made any arrests in connection with the shooting. The police said they did not know what might have motivated the attack.

“This is senseless violence,” Mr. Reed said. “We’re going to do everything we can to find out who the perpetrators are and bring them to justice.”

Detectives were “canvassing the area searching for witnesses and anyone with surveillance cameras,” said Lt. Bill Dooley of the Fresno Police Department said.

The shooting occurred on the 5300 block of East Lamona Avenue, just south of the Fresno Yosemite International Airport.

Fresno, a sprawling city of more than 500,000 people, is surrounded by vast expanses of almond and fruit trees. It is about 175 miles southeast of Sacramento.

California, which has some of the toughest gun laws in the nation, has seen a rash of mass shootings in recent weeks.

On Thursday, a 16-year-old student killed two of his classmates and wounded three others in a shooting at a high school in Santa Clarita, Calif.

Two shootings at separate Halloween parties, one in a San Francisco suburb and another in Long Beach, south of Los Angeles, killed a total of eight people.

The shooting at an Airbnb rental in Orinda, the San Francisco suburb, appeared to involve rival gangs, David Livingston, the sheriff of Contra Costa County, said at a news briefing Friday. A total of 10 people were shot in what the sheriff called a “blood bath.”