Funny or Die Finds New Life in the Streaming Era

LOS ANGELES — Will Ferrell found himself seated next to Michelle Obama at a White House Christmas party in 2010 when she leaned over and began quoting lines from Funny or Die’s “The Landlord” — the viral video featuring a 2-year-old girl shouting profanities at Mr. Ferrell for not turning in his rent money on time.

“My wife and I were like, ‘Oh, this is amazing,’ ” said Mr. Ferrell, one of the creators of the website. “If Funny or Die was only going to achieve one thing, that was it. That was the moment.”

Funny or Die did more than that. Started in 2007 by Mr. Ferrell, Chris Henchy and Adam McKay — whose daughter Pearl played the landlord in the site’s breakout video — the website served as an incubator for talent and a kind of comedy version of YouTube. Billy Eichner’s “Billy on the Street” debuted there. So did Derek Waters’s “Drunk History” and the Zach Galifianakis absurdist talk show, “Between Two Ferns.”

But cultural cachet can take you only so far. The site was hit hard in 2016 when Facebook, YouTube and other social media sites adjusted their algorithms and siphoned page views away from destination sites. Now, after years of slimming down and recalibrating itself, Funny or Die hopes that it is poised to succeed in the streaming era.

On Friday, Funny or Die’s first feature-length film, “Between Two Ferns: The Movie,” debuted on Netflix. Part road trip, part interview show, the largely improvised film features guests, like David Letterman, Matthew McConaughey and Brie Larson, who are willing to be berated by Mr. Galifianakis’s cluelessly rude alter-ego talk show host. (Sample question for the bearded Mr. Letterman: “Your son’s name is Harry. Did you name him after your face?”) 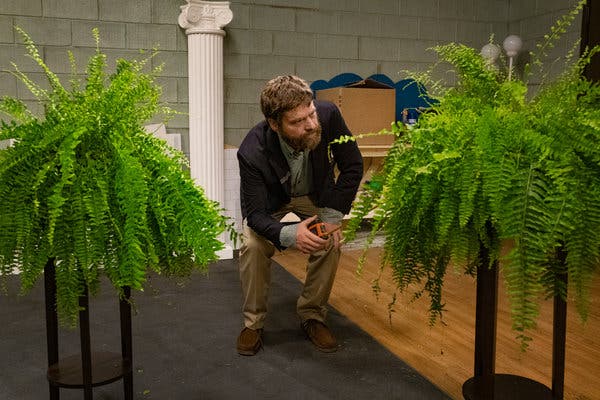 With collaborations with Netflix and CBS, Funny or Die has matured into a production company for the streaming age. On Friday, its first feature-length film, “Between Two Ferns: The Movie,” debuts.CreditAdam Rose/Netflix

The company is producing its third season of the buddy-cop series “No Activity” for CBS All Access and the fourth season of the sports comedy “Brockmire,” starring Hank Azaria and Amanda Peet, for IFC. Sarah Silverman’s “I Love You, America” ran for two seasons on Hulu before being canceled in January. Another feature, based on the hidden-camera reality show “Impractical Jokers” and directed by Mr. Henchy, will debut in 2020 via WarnerMedia.

Funny or Die has also ventured into podcasts; Season 2 of “The Ron Burgundy Podcast,” starring Mr. Ferrell as his alter ego from the hit film “Anchorman,” was made available in August, and “I’m Going to Be Kevin Bacon,” a scripted 12-episode podcast, was bought by Spotify in June.

The company has also made deals for two shows with Quibi, Jeffrey Katzenberg’s short-form video service set to debut in April. “Flipped” stars Will Forte and Kaitlin Olson as two incompetent home designers who are kidnapped by drug cartel members played by Andy Garcia, Eva Longoria and Arturo Castro. “Agua Donkeys” is about two career pool cleaners with little ambition beyond the perfect tan. Its 10 episodes, each seven to 10 minutes long, will also be available on Quibi.

“Digital and streaming are allowing us to play both sides as an independent company,” said Mike Farah, who since becoming Funny or Die’s chief executive in 2016 has increased the company’s long-form production revenue by 50 percent. That now accounts for two-thirds of the company’s revenue, with branded entertainment, once its bread and butter, now down to a third.

“That’s really the next chapter of Funny or Die,” Mr. Farah added. “That’s what all this disruption has afforded us.”

When Mr. Galifianakis first moved to Los Angeles in the 1990s, he recalled, he felt limited by the television outlets interested in his brand of humor. Funny or Die afforded him the opportunity to both experiment with different comedic forms and reach a more varied audience.

“Without Funny or Die, there would be no ‘Between Two Ferns’ movie,” he said. “Funny or Die broadened out people’s taste in comedy. They brought an absurdist take to it. It became the place for weird content to live.”

Now that weird absurdist content can find homes all over the internet. Mr. Farah is a big believer that comedy is the genre best suited for streaming platforms.

Mike Farah at the Funny or Die headquarters in West Hollywood. Mr. Farah is a big believer that comedy is the genre best suited for streaming platforms.CreditBrian Guido for The New York Times

“The mass influx of comedy specials and series that have already performed well on streaming platforms have conditioned audiences away from the communal feeling of laughing together,” he said. “It’s a bummer, but consumers have so much choice now, and that seems to be the choice they are making.”

The challenge for Mr. Farah and Funny or Die, which once had a staff of 140 but is down to 65, will be to differentiate itself from other comedy producers as its branded content recedes.

“But they do know how to speak to an audience that people think is easy to get to in comedy but, as the box office for comedies over the past few years has proven, isn’t that easy,” he added.

Mr. Farah argues that the brand, which between its presence on YouTube, Facebook, Twitter and its own website boasts some 40 million followers, gives the company an edge. Outtakes from the “Between Two Ferns” movie will be featured on those platforms, giving the film an extra promotional boost. There is also new short-form branded content, including a second season of “Under a Rock With Tig Notaro,” which begins shooting this weekend and is sponsored by Amazon and its Alexa device, and “Cooking With Jeff Goldblum” from Kroger Foods.

Creating branded content can be complicated, though. In October, Mr. McKay left the company after Funny or Die teamed up with Shell Oil and posted a three-episode branded content series, “Glowing Up Fast,” without consulting him.

“If any advertising deal would have merited checking in with me it would have been this,” Mr. McKay, best known as the Oscar-winning writer and director of films like “The Big Short” and “Vice,” said in an email.

Mr. Farah demurred when asked about Mr. McKay’s departure. “I think it was a lot of things coming together at once,” he said. “We forge onwards.”

For Mr. Farah that meant, in part, visiting the Malibu set of “Flipped,” at the Spanish-style mansion serving as Mr. Garcia’s Mexican hacienda. The crew was excitedly discussing how the estate, nicknamed La Via Contenta, was rumored to be where Beyoncé convalesced after having her twins. The director, Ryan Case, and the series co-creator Damon Jones sat at a video monitor watching footage.

“We are really excited to be part of Quibi’s first batch of content,” Mr. Jones said. “If it does well, we can help define their comedy slate.”

It’s a sentiment Mr. Farah shares. “I’m the one man in Hollywood, other than Jeffrey Katzenberg, who loves Quibi,” he said with a laugh.

Still, Mr. Farah admits that staying the course as an independent company all these years hasn’t been easy. Some days he wants to sell Funny or Die. On others, he believes its comedic imprint could become as well known as that of “Saturday Night Live.”

For that to remain a possibility, however, Funny or Die will need to keep audiences, streaming platforms and brands laughing.

“The blessing and the curse of Funny or Die is I would put our slate up against anyone’s, but we have to constantly be in production, constantly making sure that talent is being serviced,” Mr. Farah said. “We have to be good partners to the Netflixes and the Amazons and the Krogers of the world.

“This isn’t a sit back and have 100 episodes just appear in your lap,” he continued. “It’s not for the faint of heart.”