Amid the relentless focus on Washington and presidential politics, a liberal political action committee has ranked the 2020 Democratic presidential candidates on something much lower on the political food chain — what they are doing to help Democrats win state legislative seats.

The idea is that rebuilding the party nationally depends on the hard work of winning seats in state legislatures around the country. With that in mind, the two-year-old Future Now Fund, working with the progressive think tank Data for Progress, is trying to apply pressure to the 2020 Democratic presidential candidates by ranking them in terms of who is doing the most to help Democrats win state legislative races.

A ranking released Thursday shows that Senator Kirsten Gillibrand of New York, Senator Elizabeth Warren of Massachusetts and former Representative Beto O’Rourke of Texas are currently the most engaged with candidates for state office. Senator Bernie Sanders of Vermont and former Vice President Joseph R. Biden Jr. are also ranked in the top 10.

Senator Kamala Harris of California is ranked in the bottom 10, according to the analysis, which has her slightly ahead of Mayor Bill de Blasio of New York and tied with the self-help author Marianne Williamson.

“State legislatures are not where the glamour is — they’re just where the power is,” said Daniel Squadron, the co-founder and executive director of Future Now Fund, a PAC focused on state legislative elections.

He cited continuing controversies over gerrymandering and abortion as examples of just how much power state legislatures have. “There’s so much focus on the presidency, as if it alone is going to fix all the country’s problems and everything that’s wrong with our politics,” he added. “We, of course, know that’s not true.”

How the candidates were scored

The groups started tracking candidates’ activities May 1, and officials say they will release updated rankings each month until the Democrats select a nominee for president.

John Halpin, a senior fellow at the Center for American Progress, a progressive think tank that was not associated with the ranking project, said he found the methodology employed by Future Now Fund reasonable and praised their work.

“With all the money and energy going in to the presidential election, the need to develop and support the Democratic bench at the state and local level too often gets ignored,” Mr. Halpin said. “This project provides voters with a good sense of who is putting in the effort to help state political voices and who is not.”

A full list of 23 candidates and their scores can be found here. We asked the groups to explain what the rankings mean. Here’s what they told us. 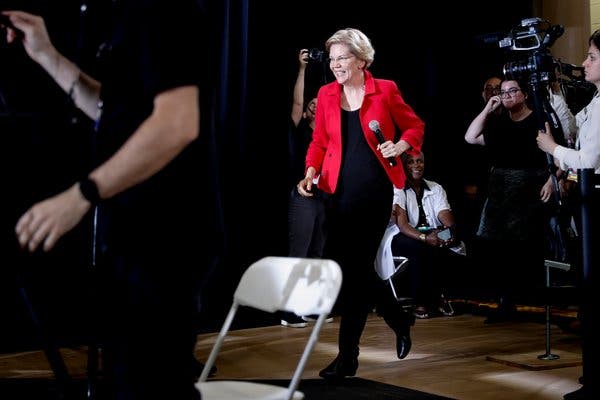 Senator Elizabeth Warren has frequently collaborated with state candidates on the campaign trail.CreditTom Brenner for The New York Times

Ms. Gillibrand regularly appears with state lawmakers, which provides a strong base for her ranking, the group said. In May, Ms. Gillibrand spoke out strongly against the anti-abortion measures taking hold in various states. She also took a trip to Georgia, during which she appeared alongside several state legislators who opposed attempts to restrict abortion.

Ms. Gillibrand’s efforts to highlight the work of state lawmakers in the abortion fights — through social media, email and in person — helped push her to the top of the rankings, Future Now Fund officials said.

Ms. Warren so frequently introduces state lawmakers during campaign appearances that the habit appears baked into her routine on the trail, Future Now Fund officials said. That steady diet of collaborations with state candidates is responsible for her high score, they said.

Mr. O’Rourke is the only 2020 Democrat who has sent multiple emails about state lawmakers to his national campaign email list, officials said. He also took two state legislators — one from Texas and one from South Carolina — to the June debate.

While Ms. Gillibrand sharply criticized moves by several states to restrict abortion, Senator Cory Booker of New Jersey wrote an open letter in GQ calling on men to support women’s reproductive rights. In it, he cited several state lawmakers who he said were “taking a stand on behalf of their constituents against these far-right attacks.”

That effort, along with significant time spent with state legislators in Iowa, helped his standing, analysts said.

As the governor of Washington, Mr. Inslee is a state official himself, and analysts said he had engaged several of his peers who cared deeply about climate change — the cental issue of his campaign.

But Mr. Squadron said changing politics at the top was not enough. “The power of the states is a reality that we keep being reminded of and keep forgetting again and again,” he said. He added, “We need to do a better job of changing the tide.”