A Feisty Google Adversary Tests How Much People Care About Privacy

PAOLI, Pa. — Gabriel Weinberg is taking aim at Google from a small building 20 miles west of Philadelphia that looks like a fake castle. An optometrist has an office downstairs.

Mr. Weinberg’s company, DuckDuckGo, has become one of the feistiest adversaries of Google. Started over a decade ago, DuckDuckGo offers a privacy-focused alternative to Google’s search engine.

The company’s share of the search engine market is still tiny — about 1 percent compared with Google’s 85 percent, according to StatCounter. But it has tripled over the past two years and is now handling around 40 million searches a day. It has also made a profit in each of the last five years, Mr. Weinberg said.

Mr. Weinberg, 40, is among the most outspoken critics of the internet giants. DuckDuckGo’s chief executive has repeatedly called for new privacy-focused legislation and has warned at hearings and in newspaper opinion pieces about the problems that big companies can cause by tracking our every move online.

But the challenges faced by DuckDuckGo reflect just how difficult it is to take on the giants and build an internet business that is focused on the privacy of its users.

After a decade, the private company’s modest success is an indication that, even as regulators around the world consider tougher rules for the data-tracking methods of big tech companies, selling consumers on privacy-focused services is still an uphill battle.

Like other search companies, DuckDuckGo displays ads at the top of each search page. But unlike others, it does not track the online behavior of its users to personalize the ads.

DuckDuckGo constantly bumps into Google’s business, which stretches far beyond search. It also has to contend with the fact that most people don’t seem willing to give up much to recover their privacy, and are easily overwhelmed when they decide to try to make a change.

“It’s not as easy to switch as we’d like it to be,” Mr. Weinberg said while sitting in his office in jeans, red sneakers and a black short-sleeve shirt. “There is a lot of inertia drawing people back to the existing system.”

These limitations are reflected in DuckDuckGo’s modest offices. DuckDuckGo, which has 65 employees, has done only two relatively small fund-raising rounds, about $13 million, that add up to less than what Google makes in an hour. Mr. Weinberg parks his 2011 Honda minivan in a parking lot you can see from his corner office, which is papered mostly in drawings by his two sons. 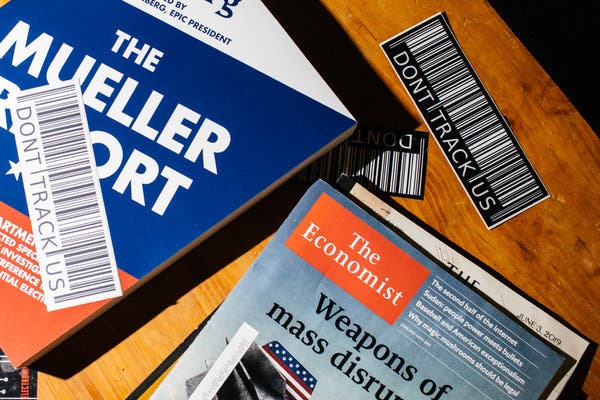 “Don’t Track Us” stickers at DuckDuckGo, which doesn’t track its users online.CreditMichelle Gustafson for The New York Times

For people who care about privacy, DuckDuckGo is a reminder that it is possible to offer internet access and build an online business without logging every move made by users. It also provides a vision of what the internet might look like if companies are forced to scale back the surveillance economy.

“DuckDuckGo is very much a poster child for a future in which companies stand with their users and still make money,” said Gennie Gebhart, a researcher at the Electronic Frontier Foundation, a nonprofit focused on privacy and online rights. “They counter the assumption that we’ve all been socialized to accept: that it is normal to hand over all your information. DuckDuckGo shows that doesn’t have to be the way.”

Google has so far avoided any showdowns with DuckDuckGo. Last year, Google added DuckDuckGo as one of the four default search engines available for users of its internet browser, Chrome.

But the internet giant has not taken kindly to DuckDuckGo’s suggestions that it is selling information about its users to the highest bidder.

“The data we collect makes our product more helpful for people in a variety of ways, such as improving our understanding of queries and combating threats like spam and fraud,” said Lara Levin, a Google spokeswoman. “We keep this data private and secure, and we provide controls so people can make their own choices.”

DuckDuckGo’s office in Paoli, Pa., about 20 miles west of Philadelphia.CreditMichelle Gustafson for The New York Times

Mr. Weinberg started DuckDuckGo in 2008 when he was a stay-at-home dad, after struggling to get two previous start-ups off the ground. The early versions of DuckDuckGo (its name is a nod to the children’s game) did not have any focus on privacy. When he went in that direction, it was attractive to only a small number of privacy advocates.

DuckDuckGo is not the only upstart that is trying to capitalize on privacy concerns. Proton Technologies, a Swiss start-up, is taking on Gmail with an alternative email service. The Firefox and Brave browsers are more focused on privacy than Chrome. And Google Maps users can switch to OpenStreetMap.

[If you’re online — and, well, you are — chances are someone is using your information. We’ll tell you what you can do about it. Sign up for our limited-run newsletter.]

DuckDuckGo’s search site looks similar to Google, with the G replaced by a playful cartoon head of a duck, who goes by the name Dax. Type in a question and up pops a list of links that looks like what you’d get from Google, with definitions from Wikipedia at the top and maps supplied through a partnership with Apple Maps.

Mr. Weinberg said the site was designed to make it feel similar to Google, to ease the transition for new users. While DuckDuckGo does not keep data on its users, it can pull the geographic location from each query and serve local results for things like restaurants and news.

“We don’t think privacy is stopping getting good search results for anybody,” Mr. Weinberg said.

In online reviews at sites like Reddit and Quora, users praising DuckDuckGo’s little features — like shortcuts for searching specific websites, known as bangs — are roughly equal in number to those who find its search results inferior.

I made DuckDuckGo my default search engine while I was doing my reporting for this article. I mostly didn’t notice a difference, though I did find the maps and local results to be less on target. And there were times when DuckDuckGo couldn’t figure out what I was looking for when Google could, especially for more obscure queries.

Joseph Turow, a professor at the University of Pennsylvania who has written extensively about privacy, said that whenever he had tried DuckDuckGo, he had given up after a few days because of nagging doubts about quality of the results.

“I’m almost embarrassed to say that I don’t use it more than I do,” Mr. Turow said. “There is something in my head that tells me I’ll get a better search from Google, even when I don’t know if that is demonstrably correct or not.”

DuckDuckGo is also up against another hard reality of the online world: If you call up DuckDuckGo on the Chrome browser, for example, Google is still logging your search queries.

“It can feel a bit futile as an individual,” said Liz Coll, the head of digital change at Consumers International, a consumer advocacy group. “It’s quite hard to isolate your search engine as opposed to all the other things you do online.”

DuckDuckGo is expanding beyond the search engine. The company’s second most popular product, a free widget that can be installed in any browser, blocks invisible trackers from Google and other companies while providing a privacy and security grade for every website.

The plug-in gives Google’s main website a grade of D, because, DuckDuckGo says, Google tracks you across the web and keeps permanent logs of your activity, which either the government or hackers might exploit.

Google has said it offers users many settings so they can opt out of data collection. Most people don’t, the company said, because the data collection makes online services better and hasn’t led to big problems — at least at Google.

Mr. Weinberg said the challenge of parsing what Google did and did not do was an indication of why it was so important to build alternatives that don’t keep any data.

“All of these companies were saying you can’t make money without tracking your users,” he said. “By us existing and getting bigger and being profitable, we serve as the existence proof that it is possible.”