MUMBAI — A jeans maker saw his delivery costs cut by half when highway police stopped asking for bribes. An aluminum wire factory faced only three inspectors rather than 12 to keep its licenses. Big companies like Corning, the American fiber-optic cable business, found they could wield a new bankruptcy law to demand customers pay overdue bills.

But cutting red tape has yet to translate into broad growth for this emerging economy, or spark much outside investment. Small and medium-sized businesses have struggled to keep up with the pace of the overhaul. Some, which seldom paid taxes before, went bankrupt. Civil servants stumbled repeatedly in efforts to turn Mr. Modi’s abruptly issued policies into simple-to-follow standards.

Now, as 900 million Indians go to the polls, Mr. Modi has to convince voters to stay the course and that his reforms — unconventional to many — are taking root. As the campaign between his Bharatiya Janata Party and the opposition Congress Party heats up, Mr. Modi faces an opponent, Rahul Gandhi, who contends that the prime minister has disrupted a functioning economy and caused job losses.

Mr. Modi’s team argues that if his party wins the national vote that ends May 19, growth will follow. “The first two years after key reforms, growth tends to slow,” said Amitabh Kant, who heads Mr. Modi’s economic policy commission. “Then the acceleration happens.” 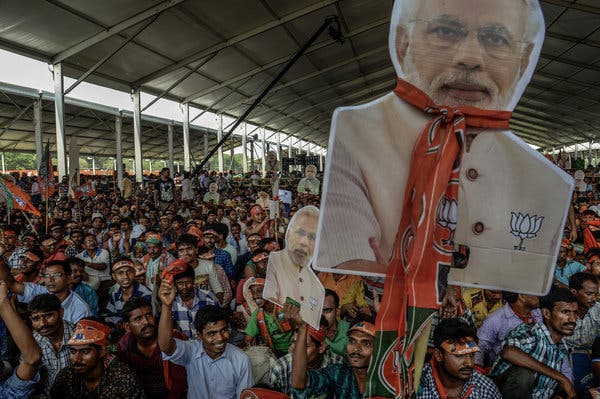 Supporters of Prime Minister Narendra Modi and his Bharatiya Janata Party holding pictures of him at a rally in Kolkata last month.CreditAtul Loke/Getty Images

Key statistics on growth and unemployment have been delayed or disputed in recent months, leading to a torrent of economic bickering. Yet India has actually done more over the past four years to make it easy to do business than any country except tiny Djibouti and even tinier Brunei, a review of World Bank data shows. Researchers assessed the ease of obtaining construction permits, connecting electricity, drafting contracts and other variables.

Business leaders, interviewed last month, consistently explain that they have seen corruption pared and bureaucracy reined in. Tax demands have been simplified, and many businesses now can go online to file for government permits and licenses.

Mr. Modi is counting on India’s business class, a key constituency, and he has led in the polls. Detractors say that advantage has come at a cost. Mr. Modi has retained the political support to keep economic reforms moving in part by fanning sectarian tensions between the country’s Hindu majority and its Muslim minority.

A factory district in Mumbai, a metropolis that is India’s most populous, shows how his program of change has started to crack a patronage system where everyone took a little but the national economy lost a lot. Mr. Modi’s idea to minimize graft has been worthwhile, business owners said, even if the execution at times was bungled.

Mehta Creation, a jeans maker in a dilapidated concrete building in the northern outskirts, paid a welter of taxes until two years ago. That included the dreaded octroi, a British import from medieval times that allowed states and some cities to collect taxes whenever goods crossed a boundary.

Mehta Creation’s budget was contorted by corruption. To avoid the octroi, which could triple the cost of a delivery and add delays, Mehta paid drivers about $5 for each parcel of jeans and then reimbursed them up to $6 per parcel to bribe local police at every border, said Dhiren Sharma, the company’s chief operating officer.

Mehta’s costs dropped after the government abolished 17 taxes, including the octroi, two years ago and established instead a national value-added tax on most business activity.

Then Mehta had a zipper problem. The single tax was fine for companies like Mehta that had been reporting income. But smaller businesses — like the zipper company it depended on — largely worked on cash payments and had seldom paid taxes.

Under the new law, Mehta had to pay a tax of 5 to 12 percent on each pair of jeans sold to retailers. Its suppliers too were obligated to pay a similar tax and, in this supply chain, Mehta was supposed to earn a credit for the taxes its suppliers paid.

But the zipper supplier and half of Mehta’s fabric vendors initially ignored the tax, said Mr. Sharma. Mehta was forced to pay the missing money. Mehta wrangled with its vendors to pay. So the Modi program energized a sort of accountability, from vendor to vendor, that was effective in sharply tax revenues if chaotic.

“In the last two years, everything has changed,” Mr. Sharma said. The national sales tax “is very good, but it could have been implemented in a better way.”

Workers at Shakti Industries, which uses aluminum cords to manufacture wire for sale to jewelry manufacturers.CreditAtul Loke for The New York Times

Next door to Mehta, seven employees of Shakti Industries work beneath a large hook holding a huge roll of aluminum cord. Daily, they thin the cord into wire and flex it around spools to sell to jewelry makers. Before Mr. Modi was elected, the tiny shop was visited by regulators from a dozen government agencies, with many demanding bribes, said Vipul S. Kamani, the owner.

Now, just three agencies are involved, he said. Licenses can be issued mostly online. A government computer generates a random inspection cycle, making it harder for inspectors to demand regular bribes. Mr. Kamani said he is saving money and “saving a lot of time, too.”

Change seem to have touched most businesses no matter the industry or service. A restaurateur described how, six years ago, he needed 32 regulators to sign off on a new eatery. Even a signboard had to be licensed. Each approval required a bribe, the restaurant owner said. He calculated that he would need to pay $1,200 per seat in bribes, a fortune in a neighborhood where meals usually cost $6.

Foreign companies have long complained about red tape. Foreign direct investment jumped sharply in Mr. Modi’s first two years in office, but has slipped since 2016. Investors say that red tape has plunged; the problem now is demand within India.

Many economists and businesspeople blame the dip in investment on the unexpected national campaign in November 2016 to recall large-denomination rupee notes.

Queuing outside a bank to deposit and exchange 500 and 1,000 rupee notes in Uttar Pradesh state, in 2016.CreditSanjay Kanojia/Agence France-Presse — Getty Images

The so-called demonetization program was meant to curb the black market and shift the economy from cash. Digital payments, the government figured, could better track revenue and lead to efficient tax collection for money to pay for roads, subways and ports.

But the program was rolled out so quickly that businesses and households scrambled for paper money. People tried to rely on credit cards and electronic banking, but many businesses were not equipped to accept them. The cash crunch hit small businesses hardest, said Pronab Sen, the country’s recently retired top statistician.

Through 2018, Mr. Modi shifted toward populist measures. He introduced restrictions that crimped Walmart and Amazon expansions and foreign internet services, and he demanded Visa, MasterCard and American Express move more operations to India. He made all politics — and economics — local. He kept steep tariffs on imports despite Trump administration complaints and after India lost zero-tariff access to the American market for many goods.

He has won grass-roots support from many Hindus while pushing economic changes advocated by business leaders. He has been mostly silent on sectarian violence, including the lynching of Muslims and lower-caste Hindus. The political swing states of India lie mainly in the north, where Hindu nationalism runs deep, and Mr. Modi seems to have retained support there.

Construction work in Chakan, in Pune, an industrial hub. CreditAtul Loke for The New York Times

Corning has a factory north of Pune, an industrial hub, and it has witnessed visible improvements — although some began under the Congress Party, before Mr. Modi took office. The road outside the factory once had huge potholes. It has been paved. Electricity blackouts occurred weekly; now electricity fails once a month. Importantly for cash flow, Corning can better force errant clients, because of a new law, to pay their bills.

When it comes to red tape, India “certainly seems to be heading in the right direction,” said Amit Bansal, Corning’s managing director for India.

Guarav Dalmia, the chairman of a family-controlled conglomerate that makes cement as well as heat-resistant tiles for steel furnaces, said big business is making a calculation in these last days of voting. “If the Modi government is re-elected, as it is likely to be, you will get economic reform as well as social challenges. It’s a package deal, whether you like it or not.”

“On a net basis,” Mr. Dalmia said, “many like me would buy that package.”