Bride claims she lost 30 pounds before wedding without exercise

A bride in the U.K. has opened up about her weight loss journey after slimming down to fit into her dream wedding dress – claiming she did it without doing any exercise.

Emma Roberts managed to drop an impressive three dress sizes in just four months ahead of her big day in May this year.

The 34-year-old from Stoke-on-Trent, Staffordshire, England used to be a bit of a gym fanatic and would train up to six times a week. But she had to give up exercise seven years ago when she developed a cyst under her kneecap and suffered inflammation in her hips.

Without being able to work out Emma, who hated vegetables, salad, pasta and rice, began piling on the pounds until she was 176 pounds and a size 16.

PUBLIX EMPLOYEES TAKE ENGAGEMENT PHOTOS AT STORE WHERE THEY MET

She was determined to drop the weight before her big day with partner Ashley Roberts, 36, in May this year, however.

Incredibly, in just four months the hairdresser shed more than 30 pounds to drop down to a weight of 144. Her waist was 10 inches smaller meaning she could fit into a stunning fit and flare dress in a size 10. 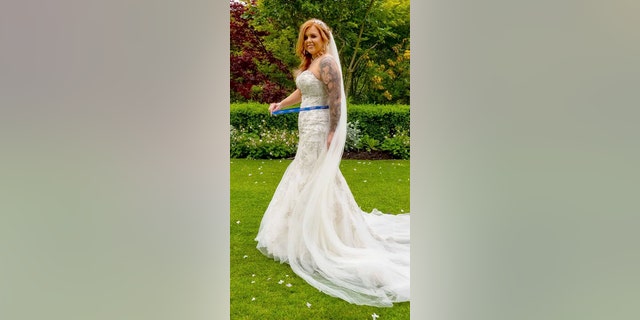 “When I gained weight, I didn’t feel very good about myself,” Roberts said. “I would only want pictures taken from my waist and above and on nights out I was no longer the fitter one wearing tight clothes, I’d switched to wearing dark loose clothes.”

“It got to a point where I made excuses to not go out with my friends because I felt so bad about myself,” she dished. “I even had a meltdown on New Year’s Eve in 2018 because I couldn’t find something to wear that I felt comfortable in. There’s no way I wanted to stay that way for my wedding.” 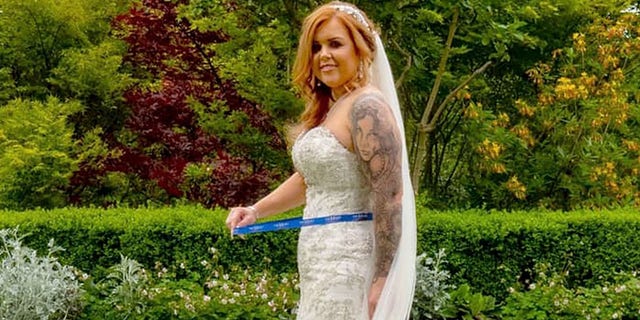 “It got to a point where I made excuses to not go out with my friends because I felt so bad about myself,” Roberts said of her old lifestyle.  (Caters News Agency)

After her electrician beau proposed in October 2017, the woman set herself the challenge to lose weight for her January 2019 New Year’s resolution.

She took herself out of her comfort zone by recording videos of herself and taking pictures to show her body transformation journey.

One of the contributing factors to her weight gain was the ibuprofen prescribed to help with her knee cyst, which made her stomach sensitive to foods containing aspartame such as low calorie fizzy drinks.

And the fussy eater – who had previously binged on bread, chocolate and takeout – had another obstacle, she refused to eat any salad or vegetables whatsoever.

Instead, the mum-of-one shed the weight by following a 600 calorie a day meal replacement plan – the 1:1 Diet from the Cambridge Weight Plan.

“I was in a constant battle with my stomach and would have to sleep the pain off most days, but I’m the best I’ve ever been since following [the plan,]” Roberts said. “Bread and chocolate were my vices – I’d use bread to bulk out my meals instead of vegetables, and after my meals I would always crave sugar.

“I’d either skip breakfast or have tea with two sugars and biscuits,” she shared. “For lunch, I’d have some chips, a breakfast sandwich or just take a packet of crisps and a bar of chocolate – anything that would let me stay an extra half an hour in bed so I didn’t have to plan lunch.”

“With dinner, I’d just eat processed ‘kid food’ that was quick and simple, and I’d have takeout about twice a week.”

Roberts believes that drinking more water and being in a calorie deficit made her fuller quicker and was key to weight loss. If she ever had cravings or urges, she would go on clothes websites and add clothes she wanted to fit in to her basket as a distraction.

And within four short months, she had shed the pounds, leaving her proud to show off her svelte new figure when she walked down the aisle.

“[Ashley] told me he’d never realized how much weight I’d gained during the seven years we’ve been together, and he’s really happy that he’s seen my confidence grow,” Roberts said. “I’m now able to wear the clothes I used to wear when we first met.”

“My friends also understood that I had to cut back on nights out and put a hold on my social life. My bachelorette party was the first time I’d been off my diet,” she continued.

“When I went for my final dress fitting, it was amazing to hear that they’d taken 10 inches off my dress,” the bride revealed. “But I feel so much better now.”

This story originally appeared on The Sun. Read more content from The Sun here.

A dad suffering from a watery eye for six months was horrified after it turned out to be facial cancer.

Graeme Heward, from Lymm, Cheshire, has been left with a hole in his face after doctors had to remove his right eye and part of his nose to tackle the tumor. The 58-year-old had spent months dealing with eye problems and had felt pressure on his sinuses but believed he was nothing more sinister than conjunctivitis. 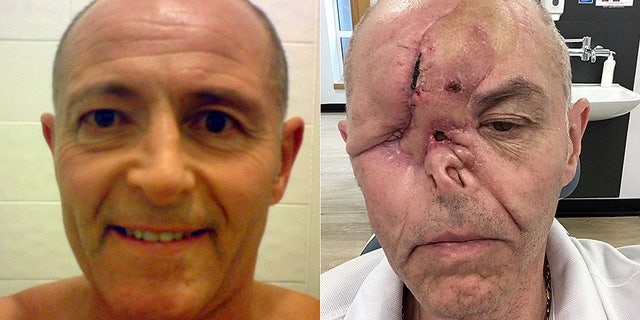 Graeme said he and his doctor initially thought his watery eye was a symptom of conjunctivitis or “dry eye.”  (Caters News Agency)

He claims even doctors initially thought it was a dry eye condition before realizing it was cancer.

Graeme, a physiotherapist, was eventually diagnosed with a cancerous tumor in his nasal lining in 2011, which he has dubbed “The Alien”.

Since then, he has undergone almost 30 operations and now wears a prosthetic face-piece to help him breathe.

“When doctors told me that they needed to remove part of my nose to get rid of the cancer, they said there was a one in 20 chance things would get messy and they’d need to go back for more,” Graeme said. “I thought they were pretty good odds at the time but two weeks after I was called in by the consultant who told me they were going have to go back in and take away my eye.”

“I was horrified, and after receiving the worst news in my life, I didn’t have anywhere to go, I didn’t want to break down in the waiting room with other people,” he said. “So I was left to do it in a hospital corridor, I had nowhere to go.”

He was prompted to go to the doctor before going on vacation with his 56-year-old partner Lesley Braithwaite.

“When I was diagnosed, Lesley and I had only been together for five years and I said to her I wouldn’t mind if she couldn’t handle it, but she hasn’t wavered once,” Graeme said. “She’s been absolutely amazing, my biggest support, I honestly don’t think I’d be here today without her.”

Graeme has had countless surgeries to go back and remove parts of the tumor in his nasal lining, correct his breathing, and fit his prosthetic.

Medics can’t give him any more radiotherapy or cut away the tumor any further due to it pushing on a major blood vessel, so he will never be cancer free but regular chemo is preventing it from spreading.

“I do get some reactions,” he said. “I think it gets up my partner, Lesley’s nose more than it does mine because when someone stares at me, if I look at them, they look away, whereas she can see people staring for much longer before I’ve noticed. It doesn’t really bother me though, it just makes me feel like how David Beckham must feel. If it’s good enough for him, it’s good enough for me.”

He says it was two years ago, when his unrelenting cancer left him with only one more treatment option, that he discovered Maggie’s charitable cancer support centers.

“I first discovered them about two years ago, when my treatment options were reduced to palliative chemotherapy,” Graeme said. “I’d had about 25 operations by then but the cancer still kept coming back and was right up against a major vessel in my neck. Until then I’d never considered alternative medicines, but I realized I was about to exit this world unless I could make drastic changes to my life.”

“I made 50 or so changes to diet, environmental exposure, stress reduction, and supplementation,” he said. “All these changes coincided with the opening of a Maggie’s center in Manchester near where I live. I just used to go in and take a seat, they’d offer me a cup of tea and I found it a lovely inspiring place to be. I always felt comfortable, they’re a little sanctuary where the staff understand what you’re going through.”

Graeme was inspired to start a fundraiser for Maggie’s in last year at the same time he received his successful facial prosthetic which has helped him to breathe and sleep properly and covered up the hole in his face.

“I realized too few people were aware of Maggie’s facilities and resources, so I thought he’d try to change that, by cycling between all 22 Maggie’s centres, zigzagging across the country from Swansea to Inverness in 17 days,” he said. It’s been fantastic doing the ride to this point seeing the centers and meeting the staff and feeling the atmosphere in each one, it’s more than matched my expectations.”