In the early 1990s, a young Australian chef named Bill Granger had a bright idea: Why not spread avocado on toast?

Nearly three decades after that successful experiment, the long and sometimes bizarre history of the avocado has reached a new and potentially controversial turning point — albeit without the Instagram potential of avocado toast. As climate change threatens the fruit’s place on brunch menus, some scientists are now asking: Why not edit its DNA?

Last month, a team of scientists in the United States and Mexico announced that it had mapped the DNA sequences of several types of avocados, including the popular Hass variety. That research is likely to become the foundation for breeding techniques and genetic modifications designed to produce avocados that can resist disease or survive in drier conditions.

Whether they realize it or not, this could be big news for toast-munching hipsters. Already, rising temperatures are disrupting the avocado supply chain, causing price increases across the United States that have also been exacerbated by trade uncertainty. 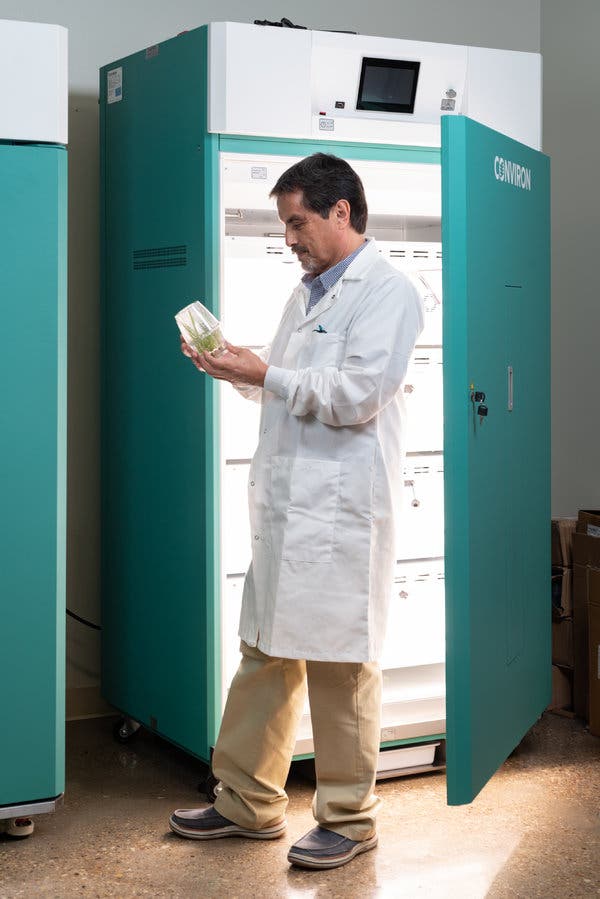 Luis Herrera-Estrella checking sprout samples in a growth chamber in his lab at Texas Tech University.CreditCarter Johnston for The New York Times

“Because of climate change, temperature might not be the same, humidity might not be the same, the soil might be different, new insects will come and diseases will come,” said Luis Herrera-Estrella, a plant genomics professor at Texas Tech University who led the avocado project. “We need to be prepared to contend with all these inevitable challenges.”

The history of the avocado dates back to the Aztecs, who named the fruit “āhuacatl,” sometimes used as slang for “testicle.” Thousands of years later, Mr. Granger is often credited with being the first chef to serve avocado toast, which is now a staple of the millennial diet, a symbol of modern decadence and an Instagram sensation.

In an interview, Mr. Granger, perhaps the earliest avocado engineer, said he approved of the genetic research. But the project has left him with a few questions about the future of his beloved fruit.

“How are they mucking around with it?” he asked. “What are they changing?”

The answer is that the avocado is not changing — at least, not yet. In recent years, scientists have sequenced the genomes of a number of fruits, including bananas, tomatoes and apples, and have used that information to create genetically modified varieties. But a genetically modified avocado is still a long way off, partly because avocado trees can take at least three years to mature.

As climate change intensifies, however, the challenges facing the avocado industry are becoming increasingly urgent. The heat wave in California last year disrupted the development of this summer’s avocado crop, forcing suppliers to import fruit from abroad. As a result, the wholesale price of a box of four dozen avocados more than doubled to between $70 and $80, from $35, said Jim Donovan, an executive at the California avocado supplier Mission Produce.

“It was probably the highest sustained price level that we’ve seen in the industry ever,” Mr. Donovan said.

Over the next few years, heat waves will become more common, scientists and industry experts predict, potentially leading to even more severe shortages. A recent study by scientists in California estimated that climate change could reduce the state’s avocado production, which last year totaled 300 million pounds, by 40 percent over the next three decades.

An incubator where bacteria carrying specific pieces of avocado DNA are grown. They are used to corroborate the sequence generated by the massive sequencing equipment.CreditCarter Johnston for The New York Times

Still, the genetic research is likely to be controversial. Even though 90 percent of scientists consider genetically modified organisms, or G.M.O.s, safe to eat, many environmental advocacy groups oppose genetic alterations. They argue that the practice has driven an increase in pesticide use as well as unwanted changes in nutritional content.

Dr. Herrera-Estrella and his collaborators in Mexico have already had to navigate the complex politics of biotechnology.

Their avocado project began in 2012 with a $2.5 million grant from the Mexican agriculture ministry. Three years later, however, the government — which has grown increasingly resistant to genetic research and biotechnology over the years — declined to renew the funding, forcing the team to cobble together money from other sources. Mexico’s agriculture ministry did not respond to a request for comment.

“We could have finished three years ago if we had the money to pay the people to do the analysis,” Dr. Herrera-Estrella said.

The researchers also faced scientific hurdles. Unlike crops such as corn or maize, the avocado has a complex structure that makes it difficult to grow in a laboratory. To collect samples of the different varieties, Dr. Herrera-Estrella and his team had to travel to remote regions of Mexico, including areas where drug cartels control the local economy.

Analyzing the genetic material in those samples was like gluing together a document that had gone through a paper shredder, Dr. Herrera-Estrella said. Scientists extracted fragments of the genome from the various avocado samples — a string of code here, a few short sequences there — and then assembled those disparate pieces into a coherent whole.

After the project got underway, advances in biotechnology made genome sequencing significantly less labor intensive, allowing the team to broaden its initial ambitions and sequence a couple of additional avocado varieties. A group of researchers in Mexico is now mapping the genomes of about a hundred more.

With those genetic maps, scientists will be able to analyze the differences among various types of avocados and identify particular segments of DNA that promote disease resistance or other desirable characteristics.

That work will set the stage for gene editing, in which researchers insert new pieces of DNA into a plant’s genome, or delete old ones. And it will facilitate breeding techniques that promote certain characteristics without directly altering the fruit’s genetic code.

Another way to bolster the avocado’s survival chances would be to engineer its rootstock — essentially a tree stump on which growers can graft new types of avocado branches. Genetic modifications to the rootstock, rather than to the upper branches of the tree that bear the fruit, could make avocados more resistant to fungal diseases without changing the fruit itself.

Whatever the scientific technique, the development of strains of avocado capable of resisting disease or surviving long droughts could lift the Mexican agriculture industry, which produces nearly half the world’s avocados and relies heavily on exports to the United States, according to Monica Ganley, an agricultural consultant and expert on Latin American trade. Last year, Mexico exported nearly two billion pounds of avocados to the United States.

Students at the National Laboratory of Genomics for Biodiversity, where most of the research and sequencing took place.CreditCelia Talbot Tobin for The New York Times

Of course, the role of international trade in the avocado supply chain also means that the fruit’s availability — and the price of avocado toast — often has as much to do with politics as with climate change.

In June, President Trump toyed publicly with the idea of levying tariffs on Mexico, a move that would have sent the price of avocados skyrocketing. Just a few weeks earlier, avocado prices had briefly surged at the fastest rate in recent memory after Mr. Trump threatened to close the southern border.

The fruit’s availability can also depend on drug cartels, whose violence sometimes disrupts local avocado production — another problem that genetic modification is unlikely to address.