Syria Peace Talks to Open After a Long, Strange Month 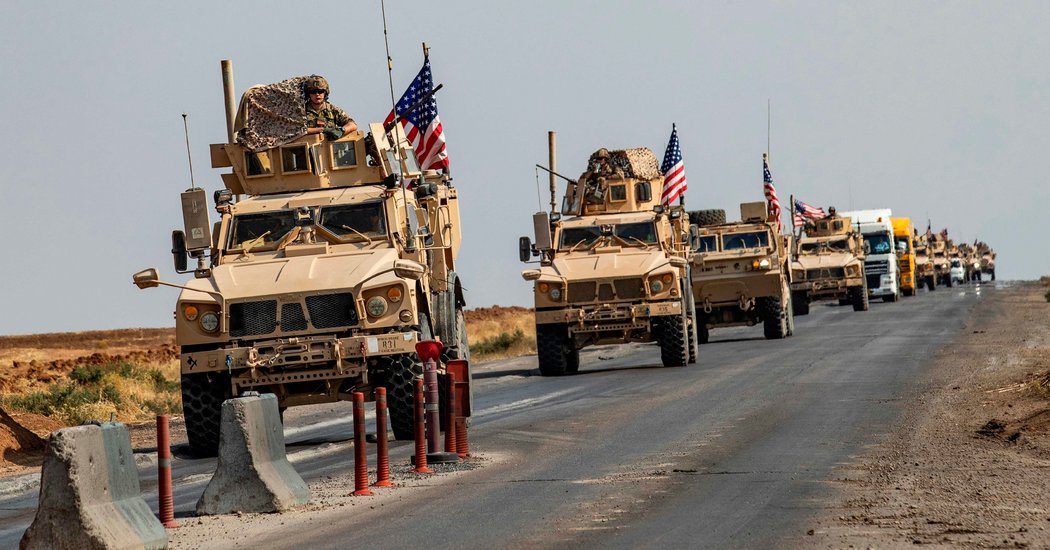 GENEVA — The first United Nations mediator who tried to broker peace in Syria declared it “mission impossible” and abandoned the effort. That was seven years and hundreds of thousands of deaths ago.

Now, as Mediator No. 4 prepares to try again, diplomats appear to be setting their sights lower and choosing their language carefully. In recent weeks, they spoke only of “a glimmer of hope” and of “a door opener to a political process.”

And that was before the following happened:

Despite the turmoil, for the first time in years, Syrian government and opposition delegates will meet this week to weigh the devastated country’s future.

On Thursday, after months of intensive but low-key diplomacy, the United Nations special envoy for Syria, Geir Pedersen, plans to bring 150 Syrians to Geneva. There, they will begin work on a constitutional committee intended to shift attention from the battlefield to what happens when, sooner or later, the fighting in their country stops.

Mr. Pedersen’s immediate goals are modest. He does not expect to achieve a peace, he said in an interview, but reforming Syria’s Constitution, could serve as “a door opener to a political process.”

“We all understand that the constitutional committee itself will not bring a solution to the conflict,” he said.

The Geneva talks are meant to be a first step under a United Nations Security Council mandate that calls for a nationwide cease-fire and elections under United Nations supervision.

A senior State Department official said Monday that the United States and other nations had several points of leverage to try to get Mr. Assad to work on a political settlement. The official, who briefed reporters on the condition of anonymity, said that could include keeping reconstruction assistance from Mr. Assad’s government, barring Syria’s re-entry into the Arab League and refusing to restore diplomatic ties with Damascus.

When the new talks were announced at the United Nations General Assembly in September, some in the West still hoped that Mr. al-Assad’s grip on his country might be loosened in any eventual settlement.

“There may be a glimmer of hope that this conflict can be ended the right way,” James F. Jeffrey, the State Department’s special envoy on Syria policy, told reporters.

But just days later, on Oct. 6, Mr. Trump announced the withdrawal, clearing the way for a Turkish military move against the Kurds. That decision in effect redrew the battle lines and strengthened Mr. al-Assad’s negotiating hand. It gave him and Russia, his strongest ally, control over parts of the country the Syrian government had relinquished years ago.

Mr. al-Assad’s government is also now negotiating directly with Kurdish fighters in the northeast, a region Syrian troops had once all but given up.

Russian airstrikes on the few remaining rebel enclaves in Syria’s Idlib and Hama Provinces on Thursday raised concerns that Mr. Erdogan may have agreed to a bargain that will also gird Mr. al-Assad’s grasp in the northwest. Mr. Erdogan had previously provided backing to some of the rebels who have fought Mr. al-Assad in that region for more than eight years.

“At some point, one has to come to terms with the fact that the international effort of 2011 to change the regime, to change the political nature of the country, has failed,” said Robert Malley, who oversaw Middle East policy at the White House during the Obama administration and is now president of the nonprofit International Crisis Group in Washington.

“There has to be a reassessment of what is realistic to do in Syria,” he said, “given the balance of power on the ground.”

It has been seven years since the first United Nations mediator, Kofi Annan, gave up on peace talks. Now it is Mr. Pedersen’s turn. For the first time in years, he said, the United Nations, Damascus and the Syrian opposition have agreed on an approach.

The constitutional committee negotiated by the United Nations includes three delegations: one from the Syrian government, one from the opposition and one drawn from civil society and different ethnic and religious groups.

The uncertainty surrounding the process is such that the United Nations has not given a detailed timeline for the talks, and the Syrian delegates have no idea how long they will be staying in this lakeside city.

Mr. Pedersen said he expects the 150 committee members to spend several days laying out their visions and aims for the Constitution, and then hand the work over to a smaller body of 45 people. To build confidence in the process, he has pushed all the parties to release detainees, but the results have been meager: freedom for 109 people. The biggest release, in February, involved 42 people, with the government setting free 20 detainees, 11 of them women and two of them children presumed to have been born in captivity.

“I had hoped for more,” Mr. Pedersen said. “I want much bigger releases in future, particularly women and children.”

To take the political process forward, he said, “we need a nationwide cease-fire and this is the opportunity to work seriously on that.”

Opposition delegates are not holding their breath. “There is no indication showing the regime is inclined to détente,” said Basma Kodmani, a member of the Syrian opposition’s negotiating team. “There’s no sign of good will.”

Delegates have also found themselves pilloried in social media as unrepresentative or unqualified, and the meetings condemned as a futile endeavor that merely buys time for Mr. al-Assad’s government.

“The difference this time,” Ms. Kodmani said, “is that Russia absolutely wants to get something moving. The incentive is to get money flowing.”

Without a political process that gives some legitimacy to postwar government, Western governments say they will withhold reconstruction aid and investment that Damascus needs to achieve stability.

The talks beginning in Geneva underscore how far the political needle has shifted in Mr. al-Assad’s favor as his once failing army, steeled by Russian and Iranian support, has expanded its control on the ground.

Some senior European officials have suggested that Mr. al-Assad not be allowed to remain in power, given chemical weapons attacks and other atrocities his forces have committed against civilians.

But forcing Mr. al-Assad to step down, as the Obama administration once demanded and even Mr. Trump suggested a few months after taking office in 2017, is not the aim of the negotiations, and it is no longer the American policy objective — even if some members of Congress still nurse the hope.

“I have about as much use for Assad as I’ve got for Erdogan,” Senator Rand Paul, Republican of Kentucky, told Mr. Jeffrey at a congressional hearing last week. “Is it still our government’s position that we don’t talk to Assad, and that Assad can be part of no negotiations?”

Mr. Jeffrey affirmed that the United States does not engage directly with Mr. al-Assad or his government. But, he said, the Trump administration has made clear that it is not seeking “to overthrow Assad.”

Days later, in Geneva, he was even more explicit.

Mr. al-Assad’s administration, Mr. Jeffrey said, “is “the legal government — even if you think it is a horrific, terrible and laden-with-war-crimes government.”