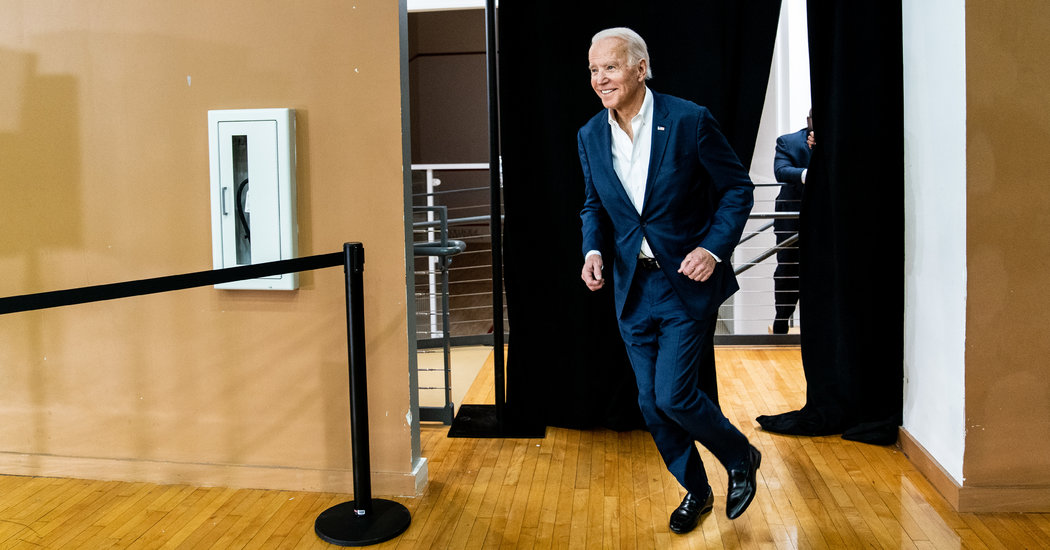 HEMINGWAY, S.C. — Joe Biden was moving — two buttons unbuttoned, sunglasses indoors, a God-love-ya in every pot — and the finger-guns would be holstered for no one.

“How ya doing!” he hollered, pointing and stepping through a rickety barbecue spot where a couple dozen fans awaited him on Thursday.

They grabbed at his hands, his shoulders, the back of his head, grazing wisps of the hair some had seen when it wasn’t quite so white. They hung on his precision pandering: an insistence that his father wanted to be “reborn in Myrtle Beach, I tell ya” and a reminder that Fritz Hollings, the state’s deceased former senator, was a good friend. They told him when they had last hugged him.

“You remember your girlfriend?” a woman called out at one point, waving an old photograph of herself with Mr. Biden. He slid his shades down his nose a little, Ferris Bueller-style, pursing his lips mischievously. He said he remembered.

“It’s a little like going home,” Mr. Biden had said of his South Carolina travels the day before. He could use the hospitality.

For much of the past year, Mr. Biden has been the front-runner who couldn’t: couldn’t hold his lead; couldn’t clear the field of moderates; couldn’t keep himself from bungling and exaggerating and meandering into rhetorical cul-de-sacs, weaknesses that continue apace.

But after three states’ worth of losing — three campaigns’ worth, if his failures in the 1988 and 2008 primaries are included — Mr. Biden has at last lurched into a moment suited to his political brand: many setbacks, little discipline, no quit.

“South Carolina is the trajectory,” he told supporters in Georgetown, S.C., clunky but firm, “to winning the Democratic nomination!”

Mr. Biden’s is a biography long built on down-and-out-ness, on the connections he fostered through tragedy and healing and the well-worn origin story of a stuttering boy of unpretentious bearing and uncommon perseverance finding his way among the blue-bloods of the capital.

And in these last, essential days before a contest where defeat would effectively end his campaign, Mr. Biden seemed to arrive at the convergence of it all, summoning the contacts and political muscle memory from his decades in public life for a final push in a state that maybe, finally, loves him back.

Several polls this week showed him leading by double digits here — others showed a closer margin — and his advisers are hopeful that a decisive victory on Saturday will send him into Super Tuesday with enough propulsion to catch Senator Bernie Sanders before his delegate lead grows prohibitively large.

Stay up to date on primaries and caucuses. Subscribe to “On Politics,” and we’ll send you a link to our live coverage.

“He is moving around this state like he’s running for state auditor,” said State Senator Dick Harpootlian, a South Carolina Democrat and a voluble, often-indiscreet Biden supporter. “He’s got those kinds of relationships.”

In North Charleston on Wednesday, Mr. Biden won the blessing of Representative James E. Clyburn, the most influential Democrat in the state, whose endorsement — while long expected by the political establishment here — nonetheless left Mr. Biden visibly moved, his mouth downturned as Mr. Clyburn spoke. “It’s hard to know what to say,” Mr. Biden managed with a shaky sigh afterward. “For real.”

Hours later in Georgetown, he encountered Deborah Meekins, 55, a former Delaware constituent now living in Myrtle Beach. “I’ve known about him since I was 8 years old,” Ms. Meekins said. “I trust him.” She recalled an outing with her grandmother to buy a sympathy card for Mr. Biden in 1972, after his wife and daughter died in a car crash. On Wednesday, she held a handmade sign: “WE COULD USE A GENTLEMAN!” The last word was underlined.

Even if Mr. Biden wins on Saturday — no sure thing, given the volatility of the race — much about his campaign has not changed. His support among young people remains anemic. His organization in many upcoming states is spotty at best. He can still be reckless on the stump, where, among other recent misadventures, he appeared to invent an anecdote about being arrested in South Africa on his way to see Nelson Mandela, a claim he ultimately admitted was wrong.

And for all of the vice-presidential trappings he still enjoys — rope lines, a phalanx of staff — his schedule is not always smooth. He is chronically, sometimes comically tardy. After a very brief stop at Scott’s Bar-B-Que in Hemingway, where the proprietors will cook any hog you bring them for $125, Mr. Biden returned to his bus for a media interview, to the disappointment of bystanders hoping to catch a glimpse. He resurfaced around an hour later for a frenetic round of photos and handshakes. Three minutes later, he was gone again.

But for one week, at least, the former vice president is standing before voters ready to reward his strengths, in a Biden-optimized state where his connection with black voters can carry him, and his shortcomings are less forgotten than celebrated.

“Doesn’t have a lot of money!” said Carl Anderson, a state legislator introducing him in Georgetown, though it was unclear if Mr. Anderson was referring to the Biden campaign, which could certainly use some cash, or Mr. Biden’s personal accounts, where he has fared just fine since leaving office. “He’s on our level.”

Joseph P. Riley Jr., the former 10-term mayor of Charleston who supports Mr. Biden, remembered the candidate’s visit in the aftermath of the 2015 massacre at Emanuel African Methodist Episcopal Church. Mr. Biden was in mourning, too, weeks after his son, Beau, had died of brain cancer. Following a church service, Mr. Riley said, he led Mr. Biden to the office of the pastor who had been killed, the Rev. Clementa C. Pinckney, to show him something.

“He only had one photograph on the wall. It was a photograph of Rev. Pinckney and Joe Biden,” Mr. Riley recalled. “I didn’t say anything, didn’t have to say anything. He understood why I brought him down there.”

Mr. Riley suggested that the inauspicious start to the primary season had only further endeared Mr. Biden to the state, infusing his bid with an urgency that perhaps only losing can deliver. “We all do better as an underdog,” he said. “I was a little football player in high school. You play better when you know the other team might be a little stronger.”

For a politician who has long been sensitive to the reception he receives in a room, his return to the South has reinforced a tale-of-two-Bidens dynamic on conspicuous display for months.

In Iowa and New Hampshire, in front of reserved and often skeptical crowds, Mr. Biden could be stiff and subdued, speaking so quietly he was sometimes difficult to hear, and often pursuing so many tangents that some voters said he was difficult to follow. (Less than two weeks before the Iowa caucuses, for example, he went on an extended riff about the Luddites.) Iowa, the state where his first two presidential campaigns were torpedoed, was also the site of a string of gaffes over the summer that revived an old narrative about Mr. Biden’s indiscipline.

The misstatements and digressions hardly disappeared when Mr. Biden set foot in South Carolina. But here, in front of crowds that are often more diverse and almost always more affectionate than those he encountered in the earliest states, Mr. Biden has also often appeared more lively, more comfortable and, sometimes, sharper.

At a CNN forum on Wednesday night, he contrasted himself pointedly and consistently with Mr. Sanders — never a given for Mr. Biden, a decorous senator at heart who sometimes struggles to press a sustained case against his opponents. On Thursday, in Conway, S.C., he let fly a mildly Trumpian boast about crowd size, telling his audience that the fire code kept “a couple hundred people” outside (the number appeared to be a bit smaller) and noting that he stopped to talk with those “who couldn’t get in.”

“He feeds off of people,” said Fran Person, who served for years as an aide to Mr. Biden. “He gets more energy. It’s almost harder to get him to go to bed as the day goes by.”

If nothing else, Mr. Biden seems to pay little penalty here for being his full self: long-winded, nostalgic, liable to quote a different relative at every stop:

“As my wife the professor would say …”

“My dad had an expression …”

“If my mother were here,” he said in Sumter on Friday, 19 minutes into a speech he promised would last “10 to 12 minutes,” “she’d say, ‘Joey, hush up.’” (In one lengthy detour the evening before, Mr. Biden lamented the kind of abuse of women that was once tolerated in England — “England, not Zambezia, or Zambia or any other.”)

In the span of about 18 hours, Mr. Biden name-checked a host of former colleagues who are no longer living: Mr. Hollings, of course, and Senators Richard Lugar, Daniel Inouye and Mike Mansfield.

Certain familiar flourishes are landing with a little extra growl: “The last guy Trump wants to run against is meee,” he said in Georgetown.

And he is flirting without apology. “You sure are pretty,” Harriet Stone, 52, told him in Hemingway.

“Tell my wife that, will ya?” Mr. Biden replied, embracing Ms. Stone.

Some locals required a harder sell. In Sumter on Friday, as Mr. Biden was winding down a town-hall-style event, Marybeth Berry, 44, appeared to question his passion. “What is your fire?” she asked him.

“Decency and honor,” he said immediately, suggesting that his stylistic contrast to “screaming” opponents, Mr. Sanders and Senator Elizabeth Warren, should not be mistaken for indifference.

More often, Mr. Biden’s supporters lobbed softballs. That night in Spartanburg, Mr. Biden was asked if he would mind if residents told everybody that he was from South Carolina for the next four to eight years.

“If the numbers hold up,” Mr. Biden said to cheers, “I may move to South Carolina.”

He reconsidered for a beat. “I’m Delaware, I’m Delaware,” he said. “But I tell you what, my wife—”

And then Mr. Biden did something notable: He decided not to squander the high.