MEMPHIS, Tenn. — A sense of calm has been restored in this city after a night of violent clashes between police and protesters following the police-involved shooting of a black man.

But the mood remained tense.

Thursday night, a day after the shooting death of Brandon Webber, 20, some residents of the Memphis community he lived in shouted their frustrations through a bullhorn on the same street where a violent clash between protestors and police erupted.

Community activist, Casio Montez, who knew Webber personally, said he was outraged by the shooting death and sympathized with the deceased man’s family.

“Nobody knows what them folks [are] feeling right now,” Montez said of Webber’s family. “You don’t understand that pain.”

Montez said Webber was a “good young man” who had graduated from Central High School in Memphis and had completed a couple of years of college. He said Webber was also a father of three who simply wanted provide for his family.

“Somebody dropped the ball,” he said angrily. “A life was lost – a child – 20 years old. He was just beginning to see life.” 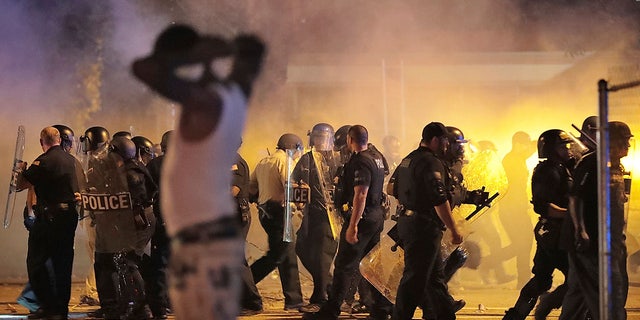 Police retreat under a cloud of tear gas as protesters disperse from the scene of a standoff after Frayser community residents took to the streets in anger against the shooting of a youth by U.S. Marshals earlier in the evening, Wednesday, June 12, 2019, in Memphis, Tenn. (Jim Weber/Daily Memphian via AP)

But police portrayed Webber differently, saying he was a violent criminal who was the main suspect in a savage shooting.

In a press release, the Tennessee Bureau of Investigation said the United States Marshals – Gulf Coast Regional Task Force had tried to take Webber into custody on several warrants out of DeSoto County, Miss. stemming from a shooting and car theft that occurred last week.

DeSoto County District Attorney John Champion said during a press conference that Webber allegedly shot someone five times and stole his red Infinity after the two met to work out a potential sale of the vehicle on June 3.

“It was every intent of Mr. Webber to kill our victim,” said Chief Scott Worsham, Hernando Police Department. “He’s still alive by the grace of God.”

The victim, who is hospitalized, was able to identify Webber for authorities who tracked him and the car down in Memphis on Wednesday, police said. U.S. Marshals encountered Webber as he was getting into a vehicle. While attempting to stop him, officials allege Webber rammed his vehicle into the officers’ vehicles multiple times before exiting with a weapon.

The officers claim that’s when they fired their guns, striking and killing Webber.

“There’s no doubt we were dealing with a violent individual,” Champion said.

Frank Gottie said the relationship between the community and police was irreparable until officers are held accountable for their actions.

“Hold these officers accountable for what they’re doing,” said Gottie. “When we kill each other, they hold us accountable. We need to hold them accountable.”

Protests broke out in the city’s Frayser neighborhood after Webber was shot. Protestors threw bricks and rocks at a line of police officers and their patrol vehicles. Officers tried to disperse the crowd with tear gas. Police said three arrests were made.

At least 36 officers and deputies were injured during the Wednesday night clash, police said Thursday. According to the Memphis Police Department’s Twitter account, 15 department cars were damaged.

As the community slowly returns to normal, at least one resident said he is hoping that police and community members can make amends.

“I think in time we will get together, but it’s going to take time,” said Alonzo Kyle. “Right now, everyone is mourning.”