A bank robbery suspect in Texas was killed after trying to escape police on Thursday when he lost control and crashed during a chase that saw speeds topping 130 mph, officials said.

The Lufkin Police Department said in a news release posted to Facebook that investigators were looking for two men who robbed a bank in Wharton around 11:30 a.m. on Thursday.

The men — identified as LeEdward Hopkins, 43, and Tony Mitchell 42, both of Houston — then sped off with an undisclosed amount of cash.

Around 7 p.m., the Texas Department of Public Safety learned that Hopkins may have been in the Lufkin area, traveling north on Loop 287 in a black Dodge Challenger. A Lufkin police officer then spotted the vehicle and tried to conduct a traffic stop, but officials said Hopkins refused to pull over. 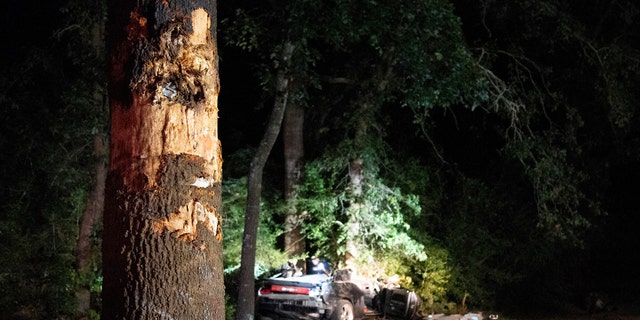 The mangled remains of the vehicle after the crash on Thursday. (Lufkin Police and Fire)

Hopkins then continued on U.S. 59 toward the city of Nacogdoches as multiple agencies joined the pursuit. Officers made an attempt to shoot out Hopkins’ back tire but were unsuccessful.

“Hopkins broke away from law enforcement as he neared Nacogdoches city limits, reaching speeds of more than 130 mph,” police said. “He lost control of the vehicle after one of his tires was spiked near Woodland Hills Golf Course.” 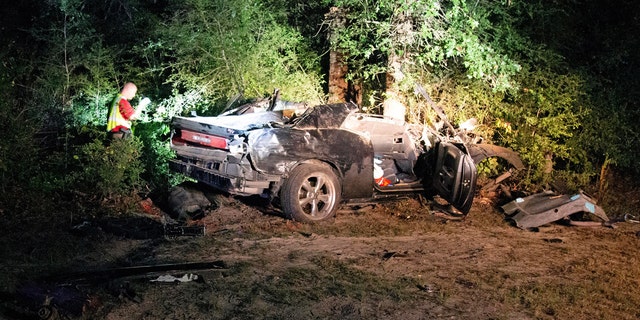 Top speeds during the pursuit exceeded 130 mph before the crash, according to police. (Lufkin Police and Fire)

Dashcam video released by the department showed the vehicle veering off the road, striking a power pole and going airborne before crashing into some nearby trees.

“The car’s engine block caught fire, but it had been thrown from the vehicle,” police said. 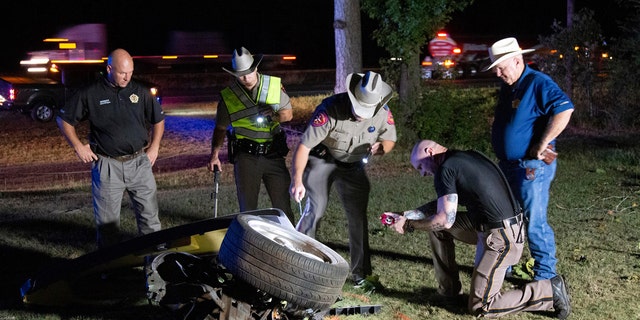 Police said that bank robbery suspect LeEdward Hopkins, 43, of Houston, was killed in the crash. (Lufkin Police and Fire)

Hopkins was believed to have died on impact and was pronounced dead at the scene. Police recovered an undisclosed amount of cash from the vehicle, along with a loaded pistol and additional magazines.

No one else was injured in the pursuit, police said. The crash and subsequent investigation kept part of the roadway closed for several hours.

Mitchell was not with Hopkins at the time of the crash and remained at large, according to police.