The New York Fed Chief Is Facing His Biggest Test. Here’s His Response. 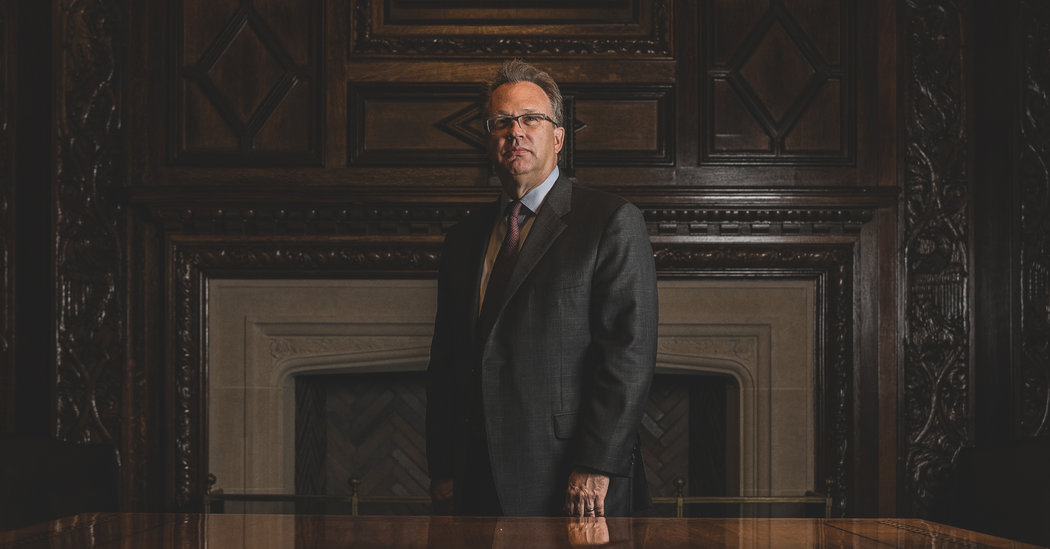 John C. Williams, president of the Federal Reserve Bank of New York, has spent the past two weeks grappling with the regional bank’s most tumultuous period in years.

Since Sept. 16, a shortage of dollars in an obscure but crucial corner of short-term Wall Street funding, called the repo market, has forced the New York Fed to engage in an ongoing series of market interventions — a first since the Great Recession. The effort is an attempt to keep the central bank’s benchmark rate from accidentally creeping higher.

The situation is the biggest test so far for Mr. Williams — who took the helm of the New York Fed in June 2018 — and one that many market analysts say deserves a less-than-stellar grade.

While officials have succeeded in getting interest rates under control, some investors have criticized the Fed for moving too hesitantly when problems first arose, waiting until rates on repurchase, or repo, agreements had skyrocketed and briefly spilled over, pushing the Fed’s benchmark rate above its intended range.

Mr. Williams, a theoretician responsible for some of the most influential economic studies of the past two decades, was at the center of the disapproval. Before assuming his role as head of the New York Fed, he ran the Federal Reserve Bank of San Francisco and made a practice of ignoring day-to-day market moves. But those moves are central to the New York branch’s mission as the Fed’s primary conduit to — and supervisor of — Wall Street.

His early tenure in New York had not been smooth sailing, even before the market hiccups this month. Mr. Williams ousted two top officials, Simon Potter and Richard Dzina, earlier this year because of differences in management style. Each had more than two decades of experience at the Fed, and Mr. Potter had overseen the markets group. Their dismissal unsettled some bank employees and raised eyebrows on Wall Street.

The shake-up also left another New York Fed official, Lorie Logan, temporarily in charge of the market portfolio — the Fed’s giant stash of bonds. Ms. Logan is well-respected and often pointed to as a natural fit for the permanent job, but former Fed officials worry that she is now essentially auditioning, which could hinder her ability to make tough or unpopular decisions.

In an interview on Friday, Mr. Williams batted back the critiques, defending the timing of the New York Fed’s recent responses and saying that the bank’s team was working effectively.

Mr. Williams also said he still supported the way the Fed has chosen to guide interest rates — what it calls an “ample reserves” framework. Instead of intervening in markets to push rates into place by balancing out supply and demand, as it did before the financial crisis, the Fed now announces how much interest it will pay on banks’ reserves, and that rate is passed through the financial system.

The approach requires the Fed to hang on to large holdings of government-backed bonds to keep reserves, essentially currency deposits at the Fed, plentiful. Central bankers had thought that they had a long way to go before reserves became scarce. So until last month, they were shrinking their balance sheet and drawing down that supply.

But Mr. Williams said the recent episode showed him that the approach might require higher reserves than he had realized. That is important, because it could hint that the Fed will start growing its balance sheet again soon, something several of Mr. Williams colleagues have signaled over the past week.

Mr. Williams, who has a constant vote on monetary policy decisions made by the Federal Open Market Committee, was mum on the other major question facing policymakers — whether the Fed will cut rates beyond the two moves it has already made. He declined to give any hint about his preferences, arguing that amid uncertainty, the Fed should keep its options open.

Here is a look at how he is addressing the biggest questions facing the New York Fed and the central bank, in a curated, and partly paraphrased, transcript.

New York Times: Some market participants have said the Fed was too slow to intervene amid the recent disruption in overnight repurchase agreements, or repos. Can you walk us through the decision-making process?

Mr. Williams emphasized that data on the Fed’s policy rate, the federal fund rate, comes in slowly and the official figure is released on a delay — it comes out at 9 a.m. the following morning. That figured into the timing, Mr. Williams said, because “we need to explain why we’re intervening — the desk directive is very clear,” he said, referring to the rules set out by the policymaking Fed committee for the New York Fed to follow.

The bank is meant “to conduct open market operations, to keep the federal funds rate in the range.”

He noted that the Fed took market participant feedback from the first intervention into account. Since Sept. 17, it has announced a day in advance that it would provide liquidity to markets and how much. It also -announced on Sept. 20 that it would continue intervening through Oct. 10.

There’s concern on Wall Street that you ousted Mr. Potter and Mr. Dzina, and, in doing so, set a tone at the New York Fed in which experts may not feel comfortable speaking up, especially about repo market issues. What is your response to that?

“It’s just completely wrong, in terms of what actually happened,” he said, noting that when rates started to spike in the market for repos earlier this month, he and Ms. Logan were both in Washington for the Federal Open Market Committee meeting.

“It was all hands on deck. Everyone was working tirelessly to understand what was happening,” he said. “The team operated magnificently, there was no delay, there was no hesitation — there was no, in any way, feeling that people weren’t sharing and discussing things very quickly. This is something that Lorie, Lorie Logan, and her colleagues have been preparing for, for years.”

“We have complete confidence in the teams’ analysis, and conclusions, and it played out exactly the way you would want it to,” he said.

When it comes to the recent repo market turmoil, what does a long-term solution to fixing that look like?

“We have learned something. Despite there being a lot of reserves in the system, they weren’t moving around. They’re lumpy.”

When it comes to the level of bank reserves needed going forward, “any view I had before, based on all the research, and the outreach, and the surveys, my view would be that — that level is probably higher,” Mr. Williams said.

“I think we are seeing that liquidity doesn’t move around as easily, in these situations, which means that if we want interest rates to stay kind of on their own in a narrow range, that we have to make sure we have that amount of reserves to support that.”

“As we think about permanent solutions, the big issues, I think, are: what is the right level of reserves,” he said, along with the possibility of some sort of standing facility to keep markets running smoothly.

Do you have a specific number for how much bigger reserves need to be?

He said he did not, but “I do have on my computer a picture of where reserves were in the summer, and where they were in September,” he said. Earlier this year, “we saw a period where these issues were not manifesting themselves in the way that we saw in the last couple of weeks.”

Is market functioning the primary thing keeping you up at night, or are other aspects of central banking in 2019 more worrying?

“This is very acute. This is very much an issue that arose very quickly,” he said of repo market disruption. But when it comes to monetary policy, “we still have a very interesting point where the economy remains in a very favorable place,” but “there’s a lot of uncertainty — the slowing in global growth continues. Uncertainty around trade and other issues, Brexit.”

You’ve been a big advocate of moving early to forestall risks, rather than waiting. Do you think that means lowering rates again before the end of the year?

“I don’t think that this issue — of the lower bound, and trying to risk manage around it — is pertinent to a specific issue, of what decision we should make at the coming meetings.”

“It’s really more about where the likely trajectories of the U.S. economy are right now,” he said. “The issue we’re grappling with, I’m grappling with, is managing these various uncertainties and some of these downside risks, that do seem more prominent now than normally.”

“I do think we’re in a very good place, on monetary policy, and obviously I supported the decisions we’ve made,” he said. “My view is just to continue doing that assessment.”

Did you forecast another cut when the entire Fed committee released its September economic projections?

“I am not going to answer what my projection, or my expectation is, because I think it’s really pretty uncertain,” he said.

He noted that policymakers’ projections fit a few different narratives. “Maybe the economy will do well, surprise to the upside,” or “the economy takes longer, or doesn’t do as well,” and “I don’t know which of those is going to happen.”

We tend to paint Fed officials a faceless technocrats. But you have obsessions outside of economics, including video games. What video games are you playing?

“I really enjoy playing the online games, so I have been playing this game Dark Souls for the last few months,” he said. “You learn about how teams work together, or don’t work together effectively.”

How do you try to bring your personality — the sneaker-wearing, book-loving, craft beer enthusiast — to your leadership role?

He said he encouraged people to be themselves at work, and, prodded, admitted that “we did change the dress code,” adding, “But people always want to know what the new dress code is. And I always say: It’s use good judgment.”

He seemed disappointed that the change in the dress code at the New York Fed, traditionally a jackets-and-heels institution, was not happening faster.

“People are changing. I’m not telling them what they should do, but people are coming in, dressed as they wish,” he said. Among men, “where you really see it — far fewer ties.”