They Meet at Last: Biden-Warren Matchup Is Main Event in Debate

He tends to meander and misspeak. She once won a college debate scholarship.

He is a relative centrist who is seen by Democrats in early polls as the strongest candidate against President Trump. She is a self-styled progressive fighter who still worries some voters and party officials about her general election appeal.

He rarely delves deep into policy on the campaign trail, preferring to discuss American values and the dangers of a second Trump administration. She gleefully ticks through her long list of detailed plans.

In style, substance and strategies for winning the White House, former Vice President Joseph R. Biden Jr. and Senator Elizabeth Warren present two starkly different options for Democratic voters, and in many ways they embody competing theories about what the Democratic Party should stand for.

Those tensions will be laid bare Thursday night in Houston, when the two candidates meet onstage at a debate for the first time in the presidential race.

Join us for live analysis on debate night. Subscribe to “On Politics,” and we’ll send you a link.

It’s a highly anticipated matchup between the early front-runner, Mr. Biden, and a liberal standard-bearer, Ms. Warren, who has steadily climbed in the polls to challenge him. Mr. Biden is eager to stress his experience. And his advisers and allies suggested in interviews that, whether obliquely or overtly, he is prepared to seize on one of Ms. Warren’s perceived strengths — her extensive and boldly progressive policy plans — and use that to accentuate his own record of liberal achievements despite the sometimes-challenging political realities in Washington. 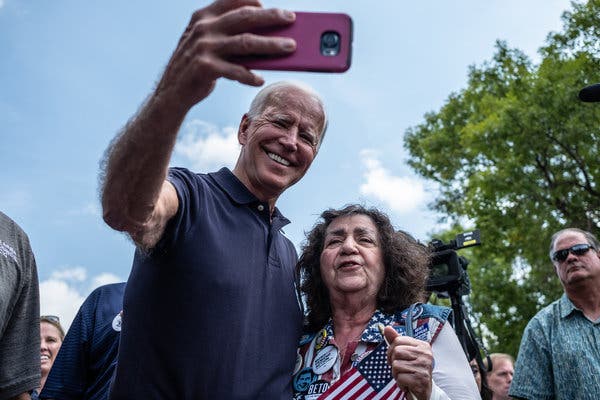 “You have to have plans, but you have to be able to execute those plans,” he said at a fund-raiser last week in Manhattan, a message he is expected to reiterate.

Ms. Warren is unlikely to pursue the kind of personal, premeditated broadside that Senator Kamala Harris launched against Mr. Biden in the first debate. But she has emerged onstage as a skilled advocate for her message of “big, structural change,” and showed that she is capable of crisply defending her far-reaching proposals.

During the second debate when her policies were implicitly criticized as unrealistic, Ms. Warren responded that she did not understand why anyone would run for president “just to talk about what we really can’t do and shouldn’t fight for.”

On Thursday, Mr. Biden, a Beltway veteran, is expected to preach pragmatism, with a focus on how to achieve Democratic priorities in a divided political moment. Ms. Warren will have another opportunity to stress the urgency of fixing what she views as an economic and political system that caters to the rich and powerful at the expense of working people.

[Which Democrats are leading the 2020 presidential race this week?]

One risk for Mr. Biden is that, while he connects well with voters in one-on-one interactions, he is prone to uneven and sometimes faltering performances onstage. And the debate arrives as he has faced scrutiny for a series of gaffes and misstatements.

“Vice President Biden has not proven to be really great on his feet,” said Steve Drahozal, chairman of the Dubuque County Democratic Party in Iowa. “I know he does not think that his gaffes are a big deal, but he is going up against a very keen, intelligent, articulate candidate who is able to frame issues very well.’’

A strong night for Ms. Warren could further propel her already-accelerating campaign both nationally and especially in Iowa, the state that begins the presidential primary process, where Mr. Biden already faces challenges.

Signs for Mr. Biden and Ms. Warren outside of the Democratic debate in July. CreditMaddie McGarvey for The New York Times

“She’s been the one who’s been gaining the most,” Mr. Drahozal said. “With Biden being in the front-runner position, I don’t think he has a lot to gain. He has a lot to lose.”

Mr. Biden’s team has no illusions about Ms. Warren’s skill as a debater and her rise in the polls, advisers and others close to the campaign acknowledge, though they insist that they are not focusing on her alone. Mr. Biden spent the first two debates facing intense criticism from his opponents, a reflection in part of his current standing atop the polls, and his campaign is bracing for more broadsides from all across the stage.

Allies noted that Mr. Biden has survived rough debate performances before, with little lasting impact on his national poll numbers. That, they argue, is evidence of the deep-seated good will that Mr. Biden, President Barack Obama’s vice president, continues to enjoy from the Democratic base.

[Sign up for our politics newsletterand join the conversation around the 2020 presidential race.]

They also see several opportunities for him to draw contrasts that could work to his benefit. That list includes emphasizing his foreign policy credentials — as a former vice president and a former chairman of the Senate Foreign Relations Committee — amid severalprominentforeign policy-related controversies involving the Trump administration. His team is convinced that the Democratic electorate is far more moderate than some activists suggest, and welcomes a debate over issues like health care — Mr. Biden supports a public option but opposes eliminating private insurance, something Ms. Warren supports under “Medicare for all” — and which social programs should be offered for free. And allies are eager to deepen an argument Mr. Biden has been previewing: that it is not enough to have ambitious plans if those proposals cannot survive the political realities of Washington.

“Lots of other candidates have great plans, they have good policy papers, many of them have, you know, talked about them on college campuses or in the Senate,” said Senator Chris Coons, Democrat of Delaware. “The difference, I think, is that Joe has decades of actual experience getting things enacted in a bitterly divided and partisan Washington, and I think he can and should point to that.”

Ms. Warren did not face significant scrutiny from other leading contenders in the first two debates. Mr. Biden’s allies are privately hopeful that she will be pressed on the details and practicalities of her proposals by several of the candidates onstage, as her formidable standing in the race now makes her a bigger target for attacks.

Ms. Warren pitches herself in a very different way than Mr. Biden does — her entire candidacy revolves around the idea of championing sweeping change.

“We start with a plan, and then we get out there and fight for it,” she told reporters in Austin, Tex., on Tuesday, when she was asked about Mr. Biden’s focus on what progressive proposals are achievable. “To me, that’s what being president is all about. It’s about laying those plans out and showing the direction for this country, and then getting in the fight, leading the fight and bringing people along.”

Ms. Warren and Mr. Biden have clashed before, exchanging sharp words during a fight over the nation’s bankruptcy laws, which culminated in the passage of a bill in 2005 that Mr. Biden supported and Ms. Warren opposed.

In April, in response to a reporter’s question on the day Mr. Biden entered the race, Ms. Warren took a swipe at him over the bankruptcy legislation they had disagreed about. But she has almost always refrained from overtly criticizing her rivals, and any kind of premeditated attack on Mr. Biden on the debate stage would be a significant departure from how Ms. Warren has approached the campaign so far.

“Different candidates have different imperatives in the debates, and there are some candidates that need to throw wild punches in order to get attention,” said Adam Green, a founder of the Progressive Change Campaign Committee, which is backing Ms. Warren. “Fortunately, Elizabeth Warren is not in that camp.”

Still, Mr. Green said, “Just because she doesn’t throw a punch doesn’t mean that she doesn’t strongly show a contrast.”

Scott M. Stringer, the New York City comptroller, who endorsed Ms. Warren on Monday, said there was no need for Ms. Warren to confront Mr. Biden on the debate stage.

Speaking to reporters on Saturday at the New Hampshire Democratic Party convention, Ms. Warren portrayed the debate as an opportunity to share her message with a large audience. She received a far more raucous reception at the convention than did Mr. Biden, who was the first presidential candidate to speak. But asked to compare her welcome to Mr. Biden’s, she did not engage.

Elizabeth Warren Has Lots of Plans. Together, They Would Remake the Economy.

Can Anyone Catch Joe Biden?

Biden Under Fire From All Sides as Rivals Attack His Record

“All I can do is stand up and talk about why I’m running,” she said. “I’m not here to criticize any other Democrat or anyone else’s campaign.”

Still, veteran Democrats caution that for all of the momentum she has enjoyed lately, Ms. Warren still has work to do in assuaging concerns about whether her unapologetically progressive candidacy would resonate in general election battlegrounds.

“Elizabeth probably needs to show that she is ready to take on Middle America, the center of our country,” said Sylvia Larsen, the former New Hampshire Senate president, who also questioned whether Mr. Biden could excite younger voters. “Our primaries push people into a more left position and so to get back to a center — Joe already holds the center. And so, can Elizabeth Warren move back to the center if she’s our nominee?”

Ms. Warren, for her part, has challenged the idea that a more moderate candidate is best positioned to win. At the convention Saturday, she told the crowd that “we can’t choose a candidate we don’t believe in because we’re scared.” And at a house party in New Hampshire on Labor Day, she cautioned against “nibbling around the edges” — without mentioning Mr. Biden by name.

“I think what’s going to carry us as Democrats is not playing it safe,” she said.