Those Foreign Business Ties? The Trump Sons Have Plenty Too 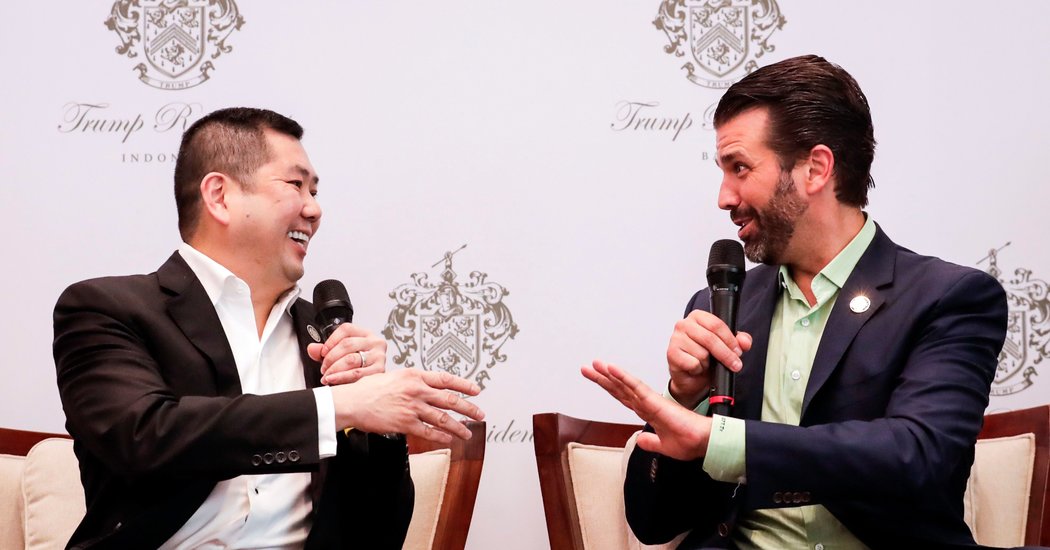 Last month, the Trump family business received approval from a local government in Scotland for a major expansion of its golf resort near Aberdeen, marking the largest real estate development financed by the Trump Organization since the 2016 election.

In August, President Trump’s eldest son, Donald Jr., flew to Jakarta to help kick-start sales at a pair of Trump-branded luxury resorts planned for Indonesia. He appeared at a private event with wealthy prospective buyers and joined his politically connected billionaire Indonesian business partner at a news conference.

“I’m here as a businessman,” Mr. Trump told the gathering in New Delhi. “I’m not representing anyone.”

But for the children of the politically powerful, personal business and public dealings can often be indistinguishable, especially when private projects depend on foreign governments that are looking to bolster ties with Washington.

In recent weeks, as the president has become embroiled in a scandal involving his interactions with Ukraine, Donald Trump Jr. and his brother Eric have taken to attacking Hunter Biden, the son of former Vice President Joseph R. Biden Jr., for his business dealings in Ukraine and China.

The brothers have accused him of leveraging his family name for personal gain while his father served in the Obama administration. Among other things, Hunter Biden was on the board of a Ukrainian energy company that has been a focus of Mr. Trump’s interest in the country.

“At the VERY LEAST, there’s the appearance of impropriety,” Donald Trump Jr. wrote on Twitter. “A clear conflict of interest.” At a rally in Minneapolis on Thursday, Eric Trump’s charged remarks about the former vice president’s son inspired the crowd of Trump supporters to chant, “Lock him up!”

Republicans, led by the president, have sought to make Hunter Biden’s international business dealings an issue in the impeachment debate in Washington. But the high-profile attack roles being played by Mr. Trump’s eldest sons have now thrust their own business dealings into the spotlight too.

Both sons have operated and promoted the Trump family business overseas during their father’s presidency, even as he retains ownership. And while the Trump and Biden father-son relationships differ in many ways, the business dealings have set up a simple parallel.

“They are criticizing the vice president’s son for doing exactly what they are doing themselves,” said Martin Ford, a member of the Aberdeenshire Council in Scotland, which voted last month to approve a proposal by the Trumps to build a 500-unit housing development. “They are conducting international business here in Scotland.”

Eric Trump, in a statement to The New York Times, said there was a distinction between his father’s career in business, with his recent turn to politics, and Mr. Biden’s decades in public office.

“When my father became president, our family stopped doing international business deals,” he said, a reference to a pledge by the Trump Organization not to begin new overseas projects during the Trump presidency. Hunter Biden, he said, did the opposite when his father became vice president.

The Trump business activities in India, Indonesia and Scotland were considered in compliance with the pledge, according to the company’s ethics rules, because they were building on deals already in the works.

Conducting business on the international stage has long been standard for the Trump Organization, which has placed the Trump name on hotels and towers in several countries.

But its international dealings have become far more complicated since Mr. Trump took office and his sons took leadership of the business, especially when foreign governments have been involved to the company’s benefit.

When the Trump Organization tangled with the majority owner of a property in Panama, for example, its local lawyers at one point called on the Panamanian president for an assist.

In Indonesia, the government is helping to build a major new highway that will make a new Trump development more accessible. Construction is scheduled to begin soon on what will be known as Trump Residences Lido, which will include 280 homes, a golf course and a hotel, south of Jakarta.

The Trump family’s partner in Indonesia — a billionaire named Hary Tanoesoedibjo — is financing the project, with the Trump family getting a cut of the sales.

In marketing materials released this summer, which featured the Trump family logo and a photograph of Donald Trump Jr., the company noted that the “Trump Residences Lido can be accessed directly through the newly opened Bocimi Toll Road.”

In Scotland, the Aberdeenshire Council recently dropped an earlier requirement that the new housing development could not be built until the Trumps spent tens of millions of dollars on other investments at the resort.

Sebastian Leslie, a local official who supported the project, said the family received no special consideration. “We don’t do that — we don’t give anybody special favors,” Mr. Leslie said.

But Mr. Martin, a council member who opposed the approval, said the Trumps benefited handsomely from the change. “It is a much, much more lucrative deal now,” he said.

Revenues coming to the Trump family in the United States have drawn scrutiny too, including at the Trump International Hotel in Washington — a property, opened in the final stages of the 2016 campaign, that has flourished while Donald Trump Jr. and Eric have run the company.

The hotel has been a magnet for Republican lobbyists and political fund-raisers, and companies and foreign officials with business before the Trump administration have thrown parties there, including the Kuwait embassy and the government of Azerbaijan.

Mr. Trump’s daughter Ivanka has also retained a stake in the family business even as she serves as a White House adviser, and last year she received trademarks in China related to her separate fashion ventures. Her husband, Jared Kushner, a senior adviser to the president, maintains a stake in his own family’s real estate business, which has received and sought funding from international sources as well.

In 2017, Mr. Kushner met privately at the White House with top executives from Citibank and the private equity firm Apollo Global Management. Those meetings came as the firms were contemplating sizable loans to his family’s business, Kushner Companies, which they did eventually make.

And since Mr. Kushner entered the White House, his family has courted state-connected investors in China and the Middle East — both regions that were in Mr. Kushner’s government portfolio — to bail out the firm’s headquarters at 666 Fifth Avenue in Manhattan.

But the presidency has also come with some costs for the Trump family business since the sons have been at the helm.

The company had been banking on global expansion to drive its growth, but when the president agreed to put a hold on new foreign deals, it curtailed those ambitions for his sons.

George Sorial, the company’s chief compliance counsel when the policy was developed, said it was the right thing to do even though it was not required by law and had cost the company significantly.

Eric Trump, in his statement to The Times, suggested that even the decision to forgo new foreign deals could be seen through the prism of Hunter Biden.

“My father was one of the most famous businessmen on earth and he sacrificed billions to be our president,” he said. “Joe Biden was an incredibly influential politician — his family made millions.”

The Biden campaign also sees opportunity in the nasty dispute. In a fund-raising email sent on Friday, the campaign singled out the Trump sons and the “lock him up” chant at the Thursday rally. “We are fighting back against this nonsense as hard as we know how every single day,” the campaign wrote.