Trump Adds to Sanctions on Russia Over Skripals 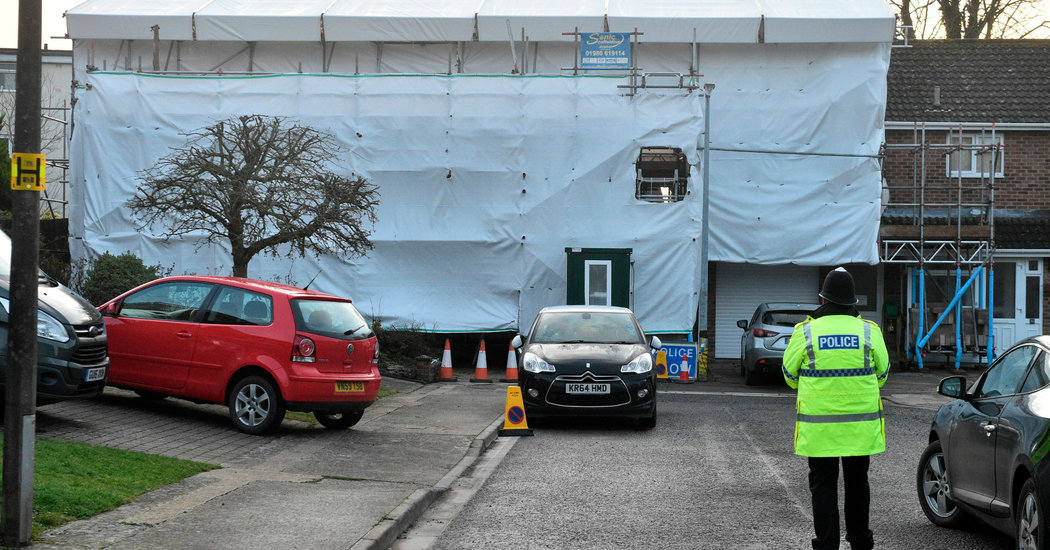 It is the second round of sanctions by the administration after a botched attempt in March 2018 to fatally poison a former Russian military intelligence officer, Sergei Skripal, in the British town of Salisbury.

The attack put Mr. Skripal and his daughter, Yulia, into a coma, and sickened at least three others. One of them, a British woman named Dawn Sturgess, died.

American and European intelligence officials accused Russia of staging the attack. Moscow has denied any involvement.

The sanctions came a day after Mr. Trump spoke to President Vladimir V. Putin of Russia, in a call Mr. Trump characterized on Thursday as focusing on huge wildfires in Siberia. Public readouts from the White House and the Kremlin on Wednesday made no mention of the sanctions.

Mr. Trump has been reluctant to take punitive actions against Russia, instead seeking better relations with Moscow despite its well-documented interference in the 2016 election.

But in recent weeks, lawmakers from both sides of the aisle have criticized his administration’s delay in taking what they have called legally mandated action to follow up on sanctions imposed last August.

Shortly after the nerve agent attack, believed to have been conducted by two Russian operatives posing as tourists, the Trump administration expelled 60 Russians from Moscow’s embassy in Washington in concert with similar expulsions of Russians from Britain and other European countries.

Mr. Skripal was recruited as a double-agent by British intelligence in the 1990s. He was convicted in Russia of spying but resettled in Britain after his release in a 2010 spy swap. His actions earned him the scorn of Mr. Putin, who has called him “a traitor” and “a scumbag.”

In August 2018, the State Department determined that the deadly use of the nerve agent, Novichok, had violated a 1991 law passed by Congress to stigmatize the use of chemical and biological weapons. That prompted an initial round of sanctions with little bite, given that they largely mandated penalties that the United States had already applied to Russia for other reasons.

The law, known as the Chemical and Biological Weapons Control and Warfare Elimination Act, also requires the administration to certify that a country found to have employed such weapons has stopped their use, has provided assurances it will not do so again and has allowed for on-site inspections. Because Russia continues to maintain that it was not behind the botched poisoning, the State Department notified Congress in November that it could not make such a determination.

That the Trump administration did not follow through with the additional penalties prescribed by law frustrated lawmakers. In May, the under secretary of state for arms control and international security, Andrea Thompson, told a Senate panel that the State Department had “teed up” the additional sanctions.

“We’ve been extremely vocal and active in pushing back on Russia’s heinous attack on the Skripals,” Ms. Thompson insisted, suggesting that the slow action on sanctions was “part of a larger Russia strategy.”

On Monday, the top Democrat and Republican on the House Foreign Affairs Committee sent a joint letter to the White House threatening new congressional action to force the administration’s hand.

“Failure by the administration to respond to Russia’s unabashed aggression is unacceptable and would necessitate that Congress take corrective action,” wrote the members, Eliot L. Engel, Democrat of New York, and Michael McCaul, Republican of Texas.

The law provided the administration with numerous sanctions to choose from. The executive order released by the White House on Thursday banned loans or other assistance to Russia by international financial institutions and prohibited most loans from American banks to Russia’s government.

European officials, especially from Eastern European countries that feel more directly threatened by Russia, have been pushing the administration for months to put the chemical weapons sanctions in place.

European officials initially expected the White House to act late last year, and then early this year. But for months, the administration stalled on the sanctions, the diplomats said.

One senior administration official said that there was no intention to delay the sanctions, but that they had not been put into place earlier this year over concern that Russia would misunderstand the message.

In June, Mr. Trump had a friendly meeting at the G20 summit in Osaka, Japan, with Mr. Putin, shortly after the Russian leader said in an interview with The Financial Times that the Skripal “spy story” was “not worth five kopecks. Or even five pounds, for that matter.” At the same summit, Prime Minister Theresa May of Britain looked disgusted as she shook hands with Mr. Putin for the cameras.