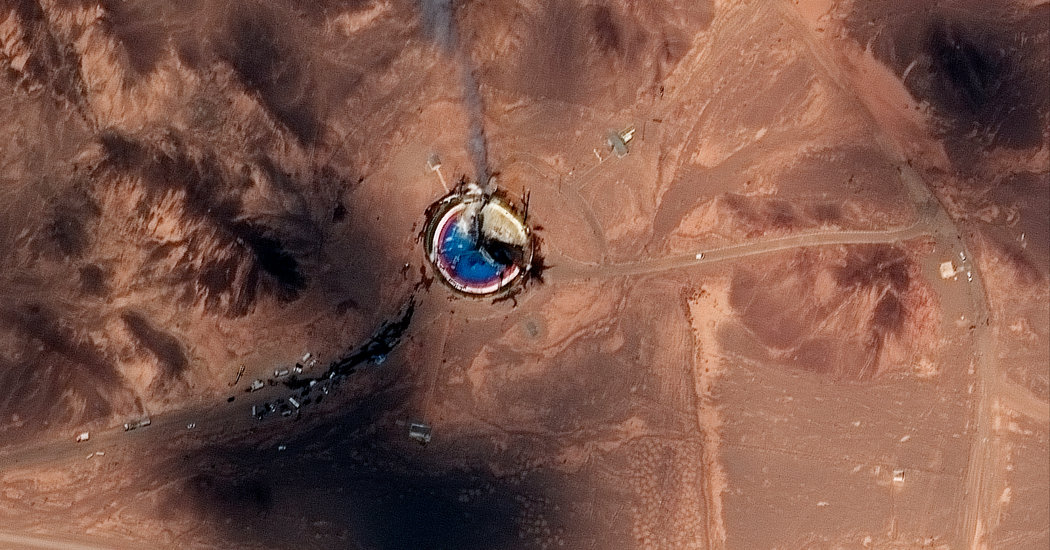 A mysterious explosion on Thursday at an Iranian space center prompted speculation that it was American sabotage, rather than an accident, that was responsible for the third successive failure of Tehran’s efforts to show it could loft satellites into orbit.

As pictures from commercial satellites of a rocket’s smoking remains began to circulate, President Trump denied Friday on Twitter that the United States was involved. It was an unusual message because the Iranian government had neither acknowledged the accident nor blamed the United States. His tweet ended with an apparent taunt: “I wish Iran best wishes and good luck in determining what happened” in the fiery accident.

But Mr. Trump also included in his tweet a high-resolution image of the disaster, immediately raising questions about whether he had plucked a classified image from his morning intelligence briefing to troll the Iranians. The president seemed to resolve the question on Friday night on his way to Camp David when he told reporters, “We had a photo and I released it, which I have the absolute right to do.”

The United States of America was not involved in the catastrophic accident during final launch preparations for the Safir SLV Launch at Semnan Launch Site One in Iran. I wish Iran best wishes and good luck in determining what happened at Site One. pic.twitter.com/z0iDj2L0Y3

There is no denying that, even if it runs the risk of alerting adversaries to American abilities to spy from high over foreign territory. And there is precedent for doing so in more calculated scenarios: President John F. Kennedy declassified photographs of Soviet missile sites during the Cuban Missile Crisis in 1962, and President George W. Bush declassified pictures of Iraq in 2003 to support the faulty case that Saddam Hussein was producing nuclear and chemical weapons.

It was unclear if Mr. Trump was using the explosion and the lurking suspicions among Iranians that the United States was again deep inside their nuclear and missile programs to force a negotiation or to undermine one.

Mr. Trump’s comments came days after a Group of 7 summit at which France tried to organize talks between Mr. Trump and President Hassan Rouhani of Iran. Both Washington and Tehran seem to be maneuvering to restart some kind of contact, and perhaps reopen negotiations over Iran’s nuclear program. At the same time, the United States is ratcheting up sanctions and Iran is resuming nuclear activities it had suspended under a 2015 agreement with the Obama administration.

Commercial satellite photographs and the far more detailed image that Mr. Trump released showed devastating damage at the Imam Khomeini Space Center. The rocket itself appeared to have disintegrated. White House and intelligence officials declined to say whether the image Mr. Trump tweeted came from his morning intelligence briefing, but other officials conceded it bore all of the markings of a spy-satellite image.

American officials have often accused Iran of conducting the launches, under the guise of its space program, to simulate the technology involved in deploying a conventional or nuclear warhead — an effort American officials have vowed to stop. In February, The New York Times reported that the Trump administration had accelerated a secret American program to sabotage both Iran’s missiles and its rockets.

Two previous attempts at launching satellites — on Jan. 15 and on Feb. 5 — failed. More than two-thirds of Iran’s satellite launches have failed over the past 11 years, a remarkably high number compared with the 5 percent failure rate worldwide.

Mr. Trump’s denial and the satellite image he released seemed meant to maximize Iran’s embarrassment over the episode.

“The United States of America was not involved in the catastrophic accident during final launch preparations for the Safir SLV Launch at Semnan Launch Site One in Iran,” he tweeted. “I wish Iran best wishes and good luck in determining what happened at Site One.”

If the accident was linked to a covert action by the United States — one that Mr. Trump would have been required to authorize in a presidential “finding” — he and other American officials would be required by law to deny involvement.

The laws governing covert actions, which stretch back to the Truman administration, focus on obscuring who was responsible for the act, not covering up the action itself. Most American presidents have fulfilled that requirement by staying silent about such episodes, but Mr. Trump does not operate by ordinary rules — and may have decided that an outright denial was his best course.

Alternatively, the president may have been trying signal to the Iranians that the United States was not involved in order to keep the episode from derailing the odd dance underway between Tehran and Washington more than a year after Mr. Trump abandoned the nuclear deal. While in public, Iranian officials insist they would negotiate only if the United States re-enters the Obama-era agreement and lifts sanctions. In private, many Iranian elites now appear to be coalescing around a strategy of continued provocations, but also an openness to talks with Mr. Trump.

Many in Iran will suspect American involvement in the string of unexplained disasters striking the country’s space program. A decade ago, the United States and Israel were the prime players in a covert action, code-named “Olympic Games,” to sabotage Iran’s nuclear centrifuges using a hard-to-detect cyberattack at the Natanz nuclear enrichment plant. Changes in computer code being fed to the centrifuges caused them to speed up or slow down, and to spin out of control.

In 2011, a huge explosion destroyed a major missile-testing site near Tehran, killing the military officer who oversaw the Iranian program. Initially, the Iranians described that as an accident, but they later linked it to an Israeli program to assassinate nuclear scientists. Israeli officials have since hinted they were involved.

That explosion destroyed buildings at a vast development site; the explosion on Thursday appeared more isolated, limited to the launchpad, which was shown smoldering in satellite photographs released by Planet Labs.

But it was Mr. Trump’s release of a satellite photograph that attracted the most discussion among intelligence officials. Several former officials noted that the upper right-hand corner, where the level of classification of the photograph would normally be denoted, was blacked out before Mr. Trump tweeted the image. That suggested a rushed effort by the United States to declassify it, presumably at Mr. Trump’s command. A glare on the photograph suggested someone may have used a cellphone to take a picture of the image as it was displayed on a tablet computer, which is how classified images are often shown to the president during security briefings.

Daryl G. Kimball, the executive director of the Arms Control Association, said the image posted by Mr. Trump looked “far better than any commercial imagery” that has been released about the launch. Revealing the abilities of American satellite surveillance, he argued, does not advance American interests.

“This tweet is an excellent example of Trump’s aimless, impulsive thinking about many national security issues,” Mr. Kimball said. “Why tweet that the United States was not involved when it may have been? Why, apparently sarcastically, wish them good luck in finding the cause for the accident?”

Commercial satellite images by Planet Labs and Maxar Technologies showed a thick plume of black smoke rising from the launching pad on Thursday, as well as what appeared to be the burned remains of the launching tower.

It was the third disaster to befall a rocket launching attempt this year at the Iranian space center, a desert complex east of Tehran named for the nation’s first supreme leader. The site specializes in rocket launchings meant put satellites into orbit.

Tehran announced its January rocket failure but said nothing the one in February that was picked up by American intelligence officials. It has also said nothing officially about Thursday’s blast. Like many closed societies, Iran tends to hide its failures and exaggerate its successes.

While Tehran says the launchings are for peaceful purposes, American officials say the advancement of orbital rocketry can aid the development of intercontinental ballistic missiles — the kind that might one day threaten the United States with nuclear strikes.

David Schmerler, a senior research associate at the Middlebury Institute of International Studies, who closely examined the satellite imagery of Thursday’s blast, said there was no way to know if it was accidental or intentional.

“Something went wrong and it ignited the fuel,” he said. “It could be sabotage or an accident. There’s no way to tell.”

Mr. Schmerler added that the first images on Thursday seemed to imply the launching pad had suffered a catastrophic explosion associated with a failed launching. But later imagery and analysis, he said, suggested the billowing smoke and debris were the result of a fueling accident.