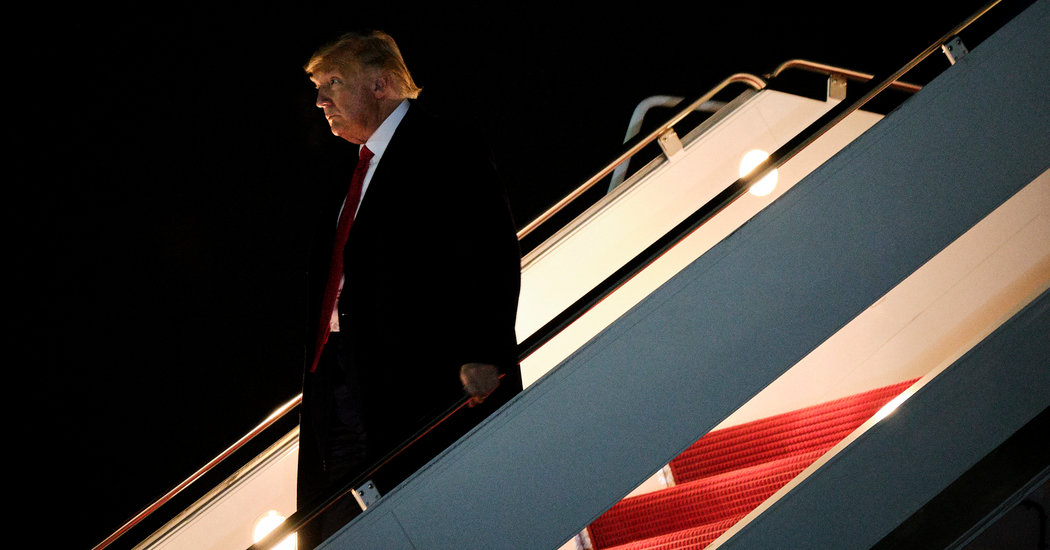 WASHINGTON — President Trump has announced plans to broaden his tariffs on foreign steel and aluminum, saying the existing tariffs had not proved as effective as he had hoped in reviving American production.

The net effect “has been to erode the customer base for U.S. producers of aluminum and steel and undermine” the effect of original tariffs, Mr. Trump said.

As a result, he said, the United States will expand its tariffs to cover products made of steel and aluminum — like nails, tacks, staples, cables, certain types of wire, and bumpers and other parts for cars and tractors — as of Feb. 8.

For American companies making these products, the announcement came as a relief.

Jeff Ferry, the chief economist at the Coalition for a Prosperous America, a trade group that counts companies making steel, cables and other products among its membership, called the measure “a wise move.”

“What we’ve seen with the steel and aluminum tariffs is that it has stimulated both of those industries, leading to additional capital investment and additional jobs,” he said, adding that he expected the new tariffs to stimulate the new industries as well.

For economists and trade experts, however, it was an “I told you so” moment.

Economists have long argued that by raising the price of steel and aluminum, Mr. Trump’s tariffs would make it more expensive to produce things like nails or cars in the United States — and would encourage companies to import more of those items, rather than making them in the United States.

Chad Bown, a senior fellow at the Peterson Institute for International Economics, called this an example of “cascading protectionism” that he said was “entirely predictable.”

“Trump’s steel and aluminum tariffs have raised the cost of key inputs, making American companies that rely on those metals less competitive worldwide,” Mr. Bown said. “Now Trump is expanding his tariffs to shield their products from competition as well. Where will it end?”

Richard E. Baldwin, a professor of international economics at the Graduate Institute of International and Development Studies in Geneva, wrote on Twitter that Mr. Trump was learning this particular lesson in economics “one failure at a time.”

In his order expanding the tariffs, Mr. Trump pointed to large increases in imports of certain products made of steel and aluminum. From June 2018 to May, imports of items including steel nails and staples rose 33 percent from a year earlier, the order said. Imports of aluminum wire and cable were up 152 percent over the same period.

“This is really the blowback on the tariffs,” Lisa Reisman, executive editor of MetalMiner, an industry publication, said in an email.

Mr. Trump has declared that his trade policies are delivering on his promises to revive the manufacturing sector by sheltering American businesses from unfair competition and encouraging companies to move factories back to the United States.

But a study released by two economists at the Federal Reserve in December showed that the costs of Mr. Trump’s trade approach to China had outweighed its benefits for manufacturers.

Tariffs offered American companies some protection from Chinese imports, the study showed. But those positive effects were more than offset by the negative effects of the trade war, including the higher prices companies must pay to import components from China, and the retaliatory tariffs China had placed on the United States.

American producers of steel and aluminum have supported the tariffs, though they acknowledge that they have not been a panacea for the industry.

United States steel producers operated their plants at 82.7 percent of capacity in the week through Jan. 18, up from 80.4 percent in the same week a year earlier, according to the American Iron and Steel Institute, a trade group. But in his order, Mr. Trump said capacity utilization had not stabilized above 80 percent, the administration’s goal.

Large steel companies have ramped up their investment since the tariffs came into effect, however. In the first nine months of 2019, United States Steel invested $978 million in its facilities, up more than 50 percent from the same period a year earlier, while capital investment at Nucor, a competitor, surged 58 percent.

But the companies have had to grapple with a steel price that is well off its recent high. U.S. Steel announced last month that it was indefinitely idling part of a plant near Detroit, sending layoff notices to roughly 1,500 employees. Some industry analysts continue to point at China, which produced steel at a record level in 2019.

At the same time, trade experts have questioned the legal basis for Mr. Trump’s continuing to make revisions to his metal tariffs.

The Trump administration has said Section 232 of a 1962 trade law, the legal provision it used to issue the tariffs, gives the president broad powers to impose tariffs to protect American industry for matters of national security. The administration has argued that domestic capacity to make iron and steel is essential for national defense and issued broad tariffs globally, before later carving out some exemptions for Argentina, Australia, Canada, Mexico, Brazil and South Korea.

But in a preliminary decision last year, the United States Court of International Trade gave a narrower interpretation of that statute, arguing that the president must act within certain periods that have already expired.