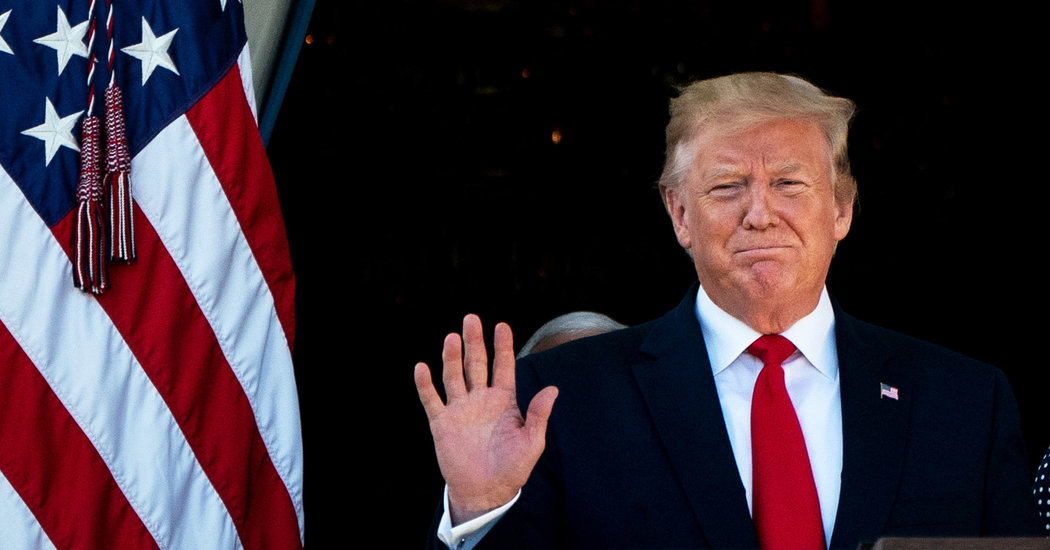 WASHINGTON — President Trump is expected to announce on Monday that he is imposing new sanctions on Iran, after saying for days that he preferred tightening the pressure on a crippled Iranian economy to launching an immediate military strike in retaliation for what American officials have said are recent aggressive acts by Tehran.

The Trump administration already moved this spring to cut off all revenues from Iranian oil exports, the lifeblood of the nation’s economy, and the new sanctions are expected to be aimed at shutting down additional sources of income with the goal of forcing political change in Tehran.

Mr. Trump and his top foreign policy aides are gambling that continuing the squeeze on Iran will compel its leaders to buckle to demands to limit their nuclear program in ways that go beyond the landmark agreement that major world powers forged with Iran in 2015 — and that Mr. Trump withdrew from last year.

Secretary of State Mike Pompeo, who met with the rulers of Saudi Arabia on a last-minute trip on Monday, also insists Iran must curb its regional military activity and end support for partner Arab militias.

The imposition of more sanctions could provoke further actions by Iran to add to the crisis that has unfolded since early May in the Persian Gulf and Gulf of Oman, analysts say.

American officials have blamed Iran for two separate sets of explosions on six oil tankers around the Strait of Hormuz, saying Iran is trying to show its capabilities and increase global oil prices in retaliation for the administration’s “maximum pressure” campaign. Iranian officials have denied responsibility. Last week, the Iranian military shot down an American drone, though the two nations debate whether the drone was in Iranian territory or over international waters.

The downing of the drone prompted Mr. Trump to order a missile strike on Iranian military sites last Thursday, but he pulled back at the last minute after hours of debate, and instead opted to launch a cyber attack. The most prominent Iran hawks in the administration, Mr. Pompeo and John R. Bolton, the national security adviser, had pushed for the missile strikes.

Mr. Pompeo also advocated in the White House Situation Room on Thursday for continuing sanctions and seeing whether Iran would capitulate to demands as the policy of cutting off all oil revenues, announced in late April, takes full effect.

Iranian leaders say the Trump administration is waging economic warfare on their nation, and analysts say the sanctions campaign, which has been done with no substantial diplomatic outreach, strengthens the standing of hard-line officials in Tehran who argue for taking retaliatory measures. The Trump administration has imposed more than 1,000 specific sanctions on Iran since the withdrawal from the nuclear agreement in May 2018, according to the State Department.

The rollout of sanctions and attempt to end all oil exports, along with an insistence by Mr. Pompeo that Tehran meet 12 expansive demands mostly unrelated to the nuclear program, “set a spark to the escalatory cycle we’re seeing today,” said Dalia Dassa Kaye, a Middle East expert at RAND Corporation, a research group in California.

“The administration argued maximum pressure would bring Iran to the negotiating table, but instead it brought provocative Iranian actions that are not likely to end without Iran getting something concrete on sanctions relief,” she said. “Talk about wanting to talk is not likely to be enough.”

Some advocates of a hard-line approach to Iran have said Mr. Trump should double down on sanctions and not be baited into doing a military strike, which could backfire by generating support among ordinary Iranians for the anti-American policies of officials in Tehran, including Ayatollah Ali Khamenei, the supreme leader.

“Now is not the time for military action,” Mark Dubowitz, chief executive of Foundation for Defense of Democracies, said on Twitter on Saturday. “Intensify the economic and political pressure. Make clear supreme leader is supreme obstacle to a better future for Iranians.”