DETROIT — Mark Greer is a black Detroiter so outraged by President Trump’s regular stream of invective toward people of color that he does his best to avoid exposure to him.

So when he clicked on a YouTube link last month to watch an episode of “The Breakfast Club,” a morning radio show popular with African-Americans, he was angered by an ad that greeted him: a message from Mr. Trump’s re-election campaign.

“It just infuriated me because I felt like they were being slick, trying to slip it in there,” said Mr. Greer, 28, who works for a philanthropic organization. “I know better, but other people who are watching this might go, ‘Hmmm.’”

President Trump’s entire approach to people of color — his attacks on political leaders, his campaign’s social media strategy targeting the black electorate, his ability to fuel black opposition but also demoralize some black voters — is one of the most extraordinary political dynamics of the Trump era. No modern president has ever vilified black Americans or sought to divide people along racial lines like Mr. Trump, while also claiming to be a champion of their economic interests.

[Sign up for our politics newsletter and join the conversation about the 2020 presidential race.]

The online ad that Mr. Greer saw illustrates the audacious nature of Mr. Trump’s strategy. Even as the president sows racial disharmony, telling four Democratic congresswomen of color to “go back,” and saying “no human being” would want to live in the “rat and rodent infested” city of Baltimore, his re-election campaign is spending money on social media to put Mr. Trump before the eyes of black voters.

The objectives are twofold: First, to try to win over a handful of black voters. The campaign intends to highlight low rates of African-American unemployment and the criminal justice overhaul the president signed, a measure that is already a subject of his campaign’s Facebook advertising.

But the more clandestine hope, and one privately acknowledged by Trump allies, is that the president can make black voters think twice about turning out for Democrats or expending energy on trying to change a system some African-Americans believe is unalterably stacked against them.

For many voters of color in this crucial swing state, Mr. Trump’s racial invective is deeply hurtful on a personal level, but something they have come to expect from a president who has consistently denigrated them.

“I think he can win again,” said Malak Aldasouqi, a 21-year-old Detroit Public Schools intern, who is Muslim and said she often feels disheartened by the president’s attacks on people of color. “It’s a little bit of a no-faith situation because there’s been a lot of times where I’ve felt betrayed by the American people.” 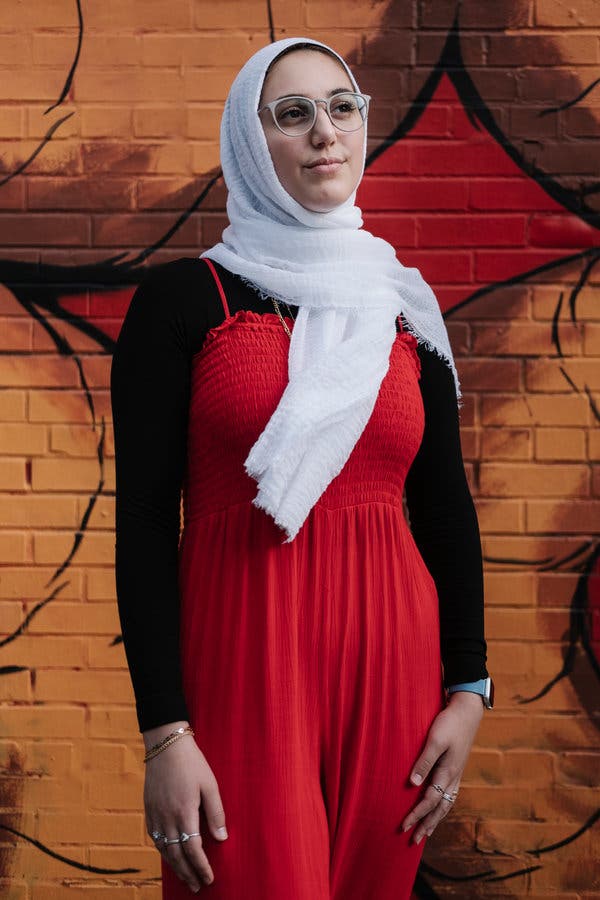 Still, Democrats also sense that the president’s race-baiting presents a unique opportunity. After a disastrous dip in black turnout in 2016 in battleground states like Michigan, Democrats are now working to harness the disdain for Mr. Trump to motivate a group that may prove to be most pivotal in the 2020 election: the low-propensity voters of color who decide late whether or not to cast ballots in the election.

Turnout figures show many stayed home in 2016, an election that marked the first decline in black participation rates in two decades. Increasing black turnout by just a few percentage points in urban areas of states like Michigan, Wisconsin and Pennsylvania could thwart Mr. Trump’s re-election.

And there are already signs that Mr. Trump’s conduct, which has been reminiscent of a 2016 campaign filled with racist tropes, is likely to ensure that outcome.

Longtime black Democratic leaders say the only time they can recall black voters being so engaged in presidential politics was when they had the chance to elect, and then to re-elect, Barack Obama.

“My dental hygienist talked with me about the election for 40 minutes the other day,” Shirley Franklin, a former Atlanta mayor, recalled with wonder, adding: “Some have preferences but a lot don’t. They just say, ‘I want to vote for whoever is going to beat Trump.’ That’s the predominant feeling.”

A June poll from CNN found that 74 percent of Democratic voters were extremely or very enthusiastic about voting next year, a higher figure than even in the years before Mr. Obama’s two elections. The figure was the same for white and nonwhite Democrats.

Theodore R. Johnson, a scholar at the Brennan Center who has written extensively on black voters, said he was skeptical that African-American turnout would reach Obama-era levels, but noted that “if it just goes up from ’16, Trump is in trouble.” A record 66.6 percent of eligible black voters cast ballots in 2012, but that number fell to 59.6 percent four years later.

Mr. Johnson said the evidence from the Trump era indicates that African-Americans are highly motivated. He pointed to their turnout in the 2017 special Senate election in Alabama and in last year’s midterm elections, in which the black vote jumped 11 percentage points above 2014 levels, the year of the previous midterm.

“He’s very, very disrespectful,” said Teresa Singleton, 55, a Detroit firefighter. “It’s very disrespectful. And I’m just shocked that the No. 1 man in the United States goes through these Twitter attack rages like that. It encourages me to get out and help advocate for someone different in the next election. I feel like it’s my responsibility.”

At the same time, the Trump campaign is spending far more on digital advertising to try to influence voters than his Democratic challengers. Since the beginning of 2019, Mr. Trump has spent $14.1 million on Facebook and Google campaigns, according to Bully Pulpit Interactive, a Democratic digital firm. The highest-spending 2020 Democratic candidate is Senator Elizabeth Warren, who has spent $3.2 million.

Some of that messaging is aimed at black voters using ZIP codes, though no public data tracks the precise amount. The Trump campaign has posted multiple ads on Facebook highlighting the criminal justice legislation, including spots that feature video of the president flashing a thumbs-up in the White House alongside African-Americans after signing the measure.

“Americans from across the political spectrum can unite around prison reform legislation that will reduce crime while giving our fellow citizens a chance at redemption,” reads the message on the screen at the end of one of the ads.

Mr. Trump doesn’t have to convert black voters with that message; just inhibiting enough of them from participating on Election Day would be a victory for his purposes. And leading black officials are already voicing concern that, in addition to Mr. Trump’s own advertising, the combination of strict voter identification laws and even more aggressive foreign interference on social media could suppress black turnout.

The risks for the president are that suburban voters who fled the Republican Party in the midterm elections will come out in force for the 2020 Democratic nominee, and that black and Hispanic voters in cities like Detroit, Milwaukee, Philadelphia and Phoenix will turn out in far larger numbers than they did in 2016.

Still, Democrats say Mr. Trump’s message is a difficult one to counteract. Opinions about the president and his racially divisive attacks are already baked into the views of many people of color.

Quentin James, who leads a group dedicated to electing black Democrats, said it is precisely because so many African-Americans are inured to Mr. Trump that the party must devote substantial money to energizing one of their most irregular, but vital, constituencies: younger black men.

Democrats say research indicates it is not helpful to invoke Mr. Trump directly to fuel such motivational efforts.

The president’s standing in polls of black voters has not changed since his 2017 defense of neo-Nazis marching on Charlottesville, Va., according to Adrianne Shropshire, the executive director of BlackPAC, a super PAC focused on motivating black voters.

“I do think that using Trump imagery is triggering for black people,” Ms. Shropshire said. “We don’t use it in our advertising.”

Democratic presidential candidates have not settled on how to deal with the man they all hope to replace. While five of the party’s 20 candidates called Mr. Trump a racist during this week’s debates in Detroit, the party’s private polling shows that affixing that label to him is not the most effective way to peel support away from the president.

A poll conducted in June for the Center for American Progress Action Fund, a political arm of the progressive think tank, offered voters six derogatory descriptions of Mr. Trump: ineffective, false promises, for the rich, divisive, corrupt and racist. Among voters surveyed, the ineffective label moved the most voters toward a generic Democratic candidate; the racist label moved the fewest.

Among black voters, the poll found that calling Mr. Trump a racist did not move support to Democrats. Calling him ineffective did.

“This isn’t about just speaking to the obvious, that our president is a racist, it has to be about how are you connected to the struggle of our communities,” Senator Cory Booker of New Jersey, one of the five candidates who called Mr. Trump racist during the debates, said in an interview on Friday. “I’ve heard that line from candidates before, but not followed by the kind of from-the-heart talk that I think is really important if there is going to be trust that the next leader really feels us, understands communities of color.”

But Lt. Gov. Mandela Barnes of Wisconsin, a state that saw one of the largest drops in African-American turnout between 2012 and 2016, warned his party that the eventual standard-bearer must speak unambiguously about the president’s conduct if he or she wants to energize black voters.

“We still have to have a candidate who won’t be afraid to stand up to him and call him out,” said Mr. Barnes, who is black. He added that the presence of an African-American candidate on the ticket “certainly would be helpful.”

In Detroit, black voters and officials articulated a desire for Democratic candidates to move beyond the president’s race-baiting and discuss issues pertinent to people’s daily lives.

“It’s time for us to kind of pull the plug and shift our message and shift our conversation,” Sherry Gay-Dagnogo, a Michigan state representative, said on Tuesday at a gathering she hosted to watch the first night of the debates. “If we start kind of ignoring a lot of the ignorance that he shows, he won’t have as much of a fan base, a following, a platform.”

Older voters, who lived through the Jim Crow era, said the president’s conduct was a constant reminder of what life was like for them decades ago.

“I’d like to get close to him, do something to his ass,” said Moses Baldwin, an 89-year-old retired Detroit police officer at Ms. Gay-Dagnogo’s debate watch party. “That’s the way I really feel.”

Charles Ellington, a 55-year-old marketing representative who came to see Mr. Booker at a rally on Thursday, has focused his anger at the president in a different way. Mr. Ellington acknowledged that Mr. Trump is “irritating” — and has been “ever since he was sworn in” — but said that’s all the more reason to show up next year.