Trump Insists He Was Right About Hurricane Dorian Heading for Alabama

WASHINGTON — When President Trump displayed a large map of Hurricane Dorian’s path in the Oval Office on Wednesday, it was hard to miss a black line that appeared to have been drawn to extend the storm’s possible path into the state of Alabama.

That might have been intended to bolster Mr. Trump’s claim on Sunday when he tweeted that “in addition to Florida — South Carolina, North Carolina, Georgia, and Alabama, will most likely be hit (much) harder than anticipated.”

Never mind that the Alabama office of the National Weather Service quickly responded to Mr. Trump’s original claim by insisting that “Alabama will NOT see any impacts from #Dorian.”

“We repeat, no impacts from Hurricane #Dorian will be felt across Alabama,” the office tweeted. “The system will remain too far east.”

So did Mr. Trump — who frequently uses black Sharpie pens to sign legislation — add the mark to justify his unfounded claim about the dangers faced by residents of the Cotton State?

Or did someone else in his administration clumsily modify the map so that it would appear to back up the president?

The black line on the map was drawn to look like the top of the so-called cone of uncertainty that is familiar to weather watchers. The line curved through the southwest corner of Georgia and the southeast corner of Alabama, and into the Gulf of Mexico.

A spokesman for the Department of Homeland Security said that he was unclear what the black line on the map was referring to and that he needed to gather additional information. He later referred questions about the map to the White House.

Asked about the marking on the map, Mr. Trump told reporters that he did not know how it got there. “I don’t know,” he said on Wednesday while insisting that his assertion about the dangers that Alabama faced had been right all along.

“We had many models, each line being a model, and they were going directly through. And in all cases, Alabama was hit, if not lightly, then in some cases, pretty hard,” Mr. Trump said.

“They actually gave that a 95 percent chance probability,” he said. “It turned out that that was not what happened. It made the right turn up the coast. But Alabama was going to be hit very hard, along with Georgia. But under the current, they won’t be.”

The president did not say where he got that information, which is directly contradicted by days of reports from the National Weather Service and the Federal Emergency Management Agency, neither of which publicly reported any threat to Alabama from the hurricane. 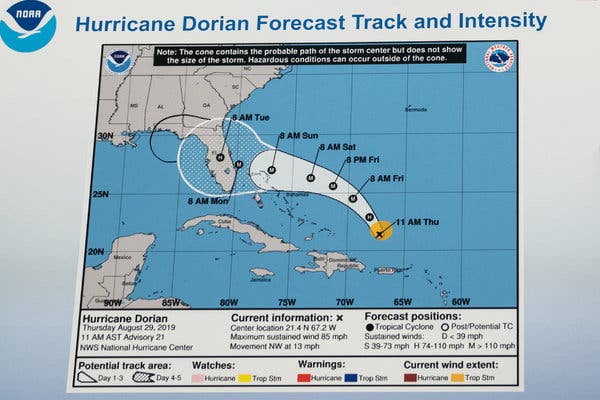 A spokesman for the Department of Homeland Security said that he was unclear what the black line on the map was referring to.CreditErin Schaff/The New York Times

Governors in Florida, Georgia, South Carolina, North Carolina and Virginia have declared emergencies as Dorian grew into a monster storm in the Atlantic. Alabama’s governor did not.

But Stephanie Grisham, the White House press secretary, on Wednesday released an internal map that she said Mr. Trump was shown on Sunday as he traveled from Camp David back to the White House.

The map provided by the White House shows the impact of Dorian touching parts of Georgia and a small corner of Alabama, much like the black line that was drawn on the larger map Mr. Trump displayed in the Oval Office.

“I just know that Alabama was in the original forecast,” Mr. Trump said on Wednesday. “They thought it would get it as a piece of it.”

Later in the day, Mr. Trump tweeted a map from the South Florida Water Management District that he said supported his contention that Dorian had been heading for Alabama.

“This was the originally projected path of the Hurricane in its early stages,” he said. “As you can see, almost all models predicted it to go through Florida also hitting Georgia and Alabama. I accept the Fake News apologies!”

However, the map came with a warning that information from the National Hurricane Center and local emergency officials superseded it: “If anything on this graphic causes confusion, ignore the entire product.”

Mr. Trump also responded on Wednesday to reports that he had suggested to Vice President Mike Pence that he stay at one of Mr. Trump’s resorts while on an trip to meet with top officials in Ireland.

Mr. Pence’s decision to stay at the Trump International Golf Links & Hotel in Doonbeg drew criticism because it meant that the vice president was more than two hours away from Dublin, where his official meetings were being held.

Mr. Pence has family roots in Doonbeg, and Marc Short, the vice president’s chief of staff, told reporters on Tuesday that it was the president who suggested his hotel when he heard that Mr. Pence was traveling to Ireland.

“It’s like when we went through the trip, it’s like, ‘Well, he’s going to Doonbeg because that’s where the Pence family is from,’” Mr. Short said. “It’s like, ‘Well, you should stay at my place.’”

But on Wednesday, Mr. Trump denied that.

“I had no involvement, other than it’s a great place,” Mr. Trump said, adding: “I heard he was going there, but it wasn’t my idea for Mike to go there. Mike went there because his family’s there. That’s my understanding of it.”

Mr. Trump said he did not suggest that Mr. Pence stay at his property.

“I don’t suggest anything,” he insisted.