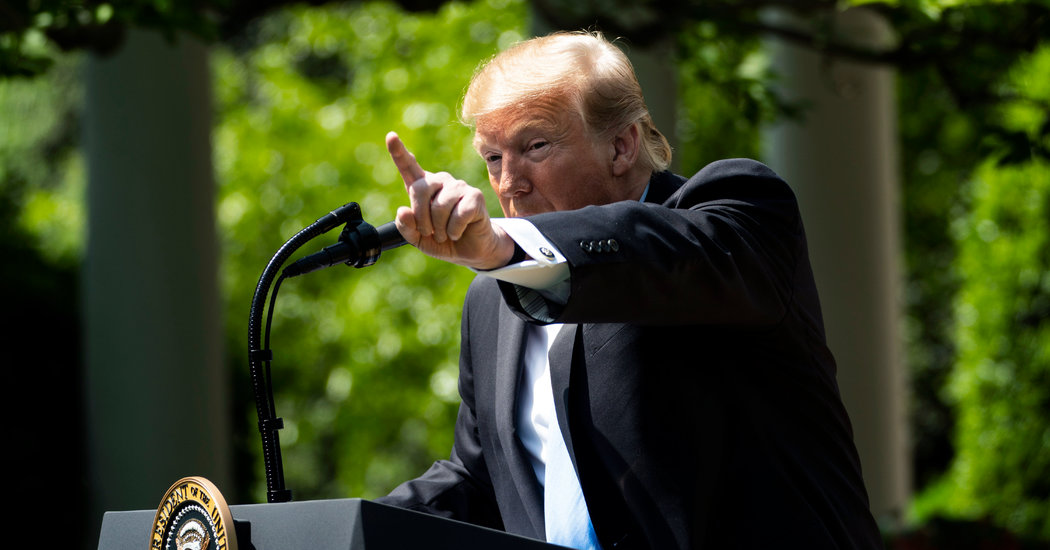 WASHINGTON — President Trump, emboldened by ongoing strength in the American economy and angered by China’s attempts to renege on previous commitments, is prepared to prolong his monthslong trade war rather than settle for a weak agreement, his top advisers said Monday.

Mr. Trump’s threat to increase tariffs on $200 billion worth of Chinese goods on Friday morning followed a visit last week by his top advisers to Beijing, in which the Chinese “retreated” on parts of the deal, the advisers said.

“We’re moving backwards instead of forwards, and in the president’s view that’s not acceptable,” Robert Lighthizer, the president’s top trade negotiator, told reporters on Monday.

Mr. Trump on Sunday threatened to hit nearly all of China’s exports to the United States with tariffs. The president was angered by China’s attempt to reverse commitments to essentially codify an agreement to provide American companies with more equal treatment, according to people familiar with the negotiations. The president was also irked by China’s insistence that the United States quickly lift all of the tariffs Mr. Trump had placed on $250 billion worth of imports.

Steven Mnuchin, the Treasury Secretary, said the United States would reconsider imposing higher tariffs on China if the negotiations got “back on track.” He added that negotiators had been optimistic in the past about the prospects for a deal, but that recent interactions with the Chinese had moved negotiations “substantially backwards.”

Mr. Trump’s last-minute warning highlights the difficult political position facing his administration as it tries to convince businesses, lawmakers and consumers that the deal it strikes with China will truly level the playing field and put the United States in a better economic position. He is also facing pressure to show that the pain of his trade war will be worth it for the companies, farmers and consumers caught in the middle.

On Monday, Mr. Trump repeated his insistence that China rebalance its economic relationship with the United States and end its role as a net exporter of goods.

The president’s promise to raise tariffs to 25 percent on Friday and eventually tax another $325 billion worth of Chinese goods sent global markets down on Monday, as investors worried that the trade war could be prolonged indefinitely. Stocks fell sharply after trading opened, with the S&P 500 starting down more than 1 percent. But the market gained ground throughout the trading day. Shortly before 3 p.m., the S&P 500 was down a bit less than 0.5 percent.

The decision to up the ante came after Mr. Trump’s trade advisers returned dismayed by China’s refusal to mention commitments it had made to update various Chinese laws in the final text of the trade agreement.

Instead, Chinese negotiators had insisted that any concessions would need to be achieved through regulatory and administrative actions, not through changes made to Chinese law through its legislature. The provisions included, but were not limited to, the forced transfer of technology from American companies to Chinese firms, the people familiar with the negotiations said.

Chinese negotiators have also continued to insist that Mr. Trump lift the tariffs he has placed on $250 billion worth of goods more quickly than the administration wants. With the two sides still disagreeing over issues including how China subsidizes its companies, its restrictions on data transfers, rules for foreign cloud computing companies and its approvals of genetically modified seeds, the president concluded that China’s offers were not good enough.

Late last week, Mr. Trump and a small circle of advisers decided the United States was in a strong enough economic position to ramp up tariffs on $200 billion worth of Chinese exports. People familiar with the president’s thinking said that he believed that a strong American economy would enable the United States to withstand any blowback from those higher tariffs — including Chinese retaliation — until China was ready to come back to the negotiating table.

His unconventional approach drew accolades from both sides of the political aisle.

“Excellent decision by @realDonaldTrump!” Laura Ingraham, a Fox News host, tweeted, which the president retweeted onto his feed. “No other president has had the guts to take on the China challenge.”

Advisers to Mr. Trump say he has felt vindicated by a string of positive economic data, in particular the first-quarter gross domestic product, which increased partly as a result of rising exports. While economists have attributed economic growth in the first quarter to a variety of factors, the president and his advisers interpreted the figures as evidence that his tariffs are reducing the trade deficit and boosting growth.

Mr. Trump’s belief that his trade war is not having an economic downside is fueling his insistence that some of the tariffs on China remain in place. But China has insisted that all of the tariffs must come off as part of the deal.

The president has turned to tariffs as a source of leverage to bring other negotiations to the close. In talks last year over the North American Free Trade Agreement, Mr. Trump threatened to leave Canada out of the deal entirely and strike a deal with Mexico, a gambit that brought negotiations to a rapid conclusion.

Yet analysts have questioned whether volatility in the stock markets could change the president’s mind. He has repeatedly referred to stock markets as a kind of scoreboard for his presidency.

In a note on Monday, Joshua Shapiro, the chief United States economist for MFR, an economic research firm, said that his forecast and most others assumed that the United States-China trade talks resulted in no further damage, at a minimum. “Given expectations of an agreement, failure to achieve one would be a serious blow to markets and the economy,” he wrote.