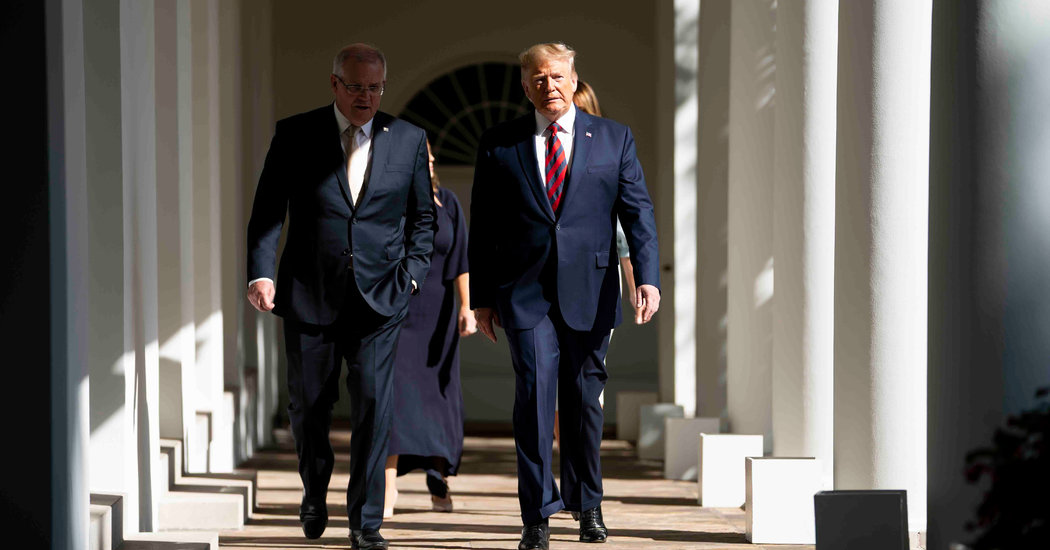 WASHINGTON — President Trump pressed the Ukrainian president in a July call to investigate former Vice President Joseph R. Biden Jr.’s son, according to a person familiar with the conversation, an apparently blatant mixture of foreign policy with his 2020 re-election campaign.

Mr. Trump also repeatedly told President Volodymyr Zelensky of Ukraine to talk with his personal lawyer Rudolph W. Giuliani, who had been urging the government in Kiev for months to investigate Mr. Biden and his family, according to two other people briefed on the call.

Mr. Trump’s request for an investigation of the family of Mr. Biden, a leading candidate for the Democratic presidential nomination, is part of the secret whistle-blower complaint that is said to be about Mr. Trump and at least in part about his dealings with Ukraine, according to two people familiar with the complaint.

The president has made no secret that he wanted Ukraine to investigate whether there was any improper overlap between Mr. Biden’s own diplomatic efforts there and his son’s role with a gas company owned by a Ukrainian oligarch. “Someone ought to look into Joe Biden,” Mr. Trump told reporters on Friday in response to a question about whether he brought up Mr. Biden during his call with Mr. Zelensky.

The new revelations gave added urgency to critical questions about Mr. Trump’s dealings with the Ukrainian government. At the same time that the president sought an investigation into a potential political rival, the Trump administration for weeks froze military aid for Ukraine, which is battling Russian-controlled separatists in the country’s east.

The United States suspended the assistance to Ukraine in early July, according to a former American official. Mr. Trump did not discuss the aid in the July 25 call with Mr. Zelensky, whose government did not learn of the suspension until August, according to people familiar with the call. The Wall Street Journal first reported details of it.

For Democrats who want to examine the whistle-blower complaint — itself the subject of an internal administration dispute over whether to hand it over to Congress, as is generally required by law — the key question is whether Mr. Trump was demanding a quid pro quo, explicitly or implicitly. Democratic House committee chairmen are already investigating whether he misappropriated the American foreign policy apparatus for personal political advantage and have requested the transcript of his call with Mr. Zelensky from the State Department and the White House.

The burgeoning controversy had echoes of the dominant scandal of the first years of Mr. Trump’s administration: whether his campaign sought help from Russia to benefit him in 2016. Ultimately, the special counsel found that although “insufficient evidence” existed to determine that Mr. Trump or his advisers engaged in a criminal conspiracy with the Russians, his campaign welcomed Moscow’s election sabotage and expected to benefit from it.

Any attempt by Mr. Trump to ask a foreign power to “dig up dirt” on a political rival while withholding aid is corrupt, said Representative Adam B. Schiff, Democrat of California and the chairman of the House Intelligence Committee, one of the panels examining Mr. Trump’s Ukraine dealings.

“No explicit quid pro quo is necessary to betray your country,” tweeted Mr. Schiff, who has also pushed for the whistle-blower complaint to be given to Congress.

“It’s a ridiculous story. It’s a partisan whistle-blower,” Mr. Trump told reporters in the Oval Office, though he acknowledged he did not know the person’s identity. “They shouldn’t even have information.”

Mr. Trump and Mr. Giuliani have pressed for an investigation of the Bidens for weeks, after reports this year in The New York Times and elsewhere examined whether a Ukrainian energy company that had faced corruption investigations sought to buy influence in Washington by hiring Mr. Biden’s younger son, Hunter Biden, who had a lobbying business in Ukraine while his father was vice president.

During his vice presidency, Mr. Biden cast himself as both the Obama administration’s booster of military assistance to Kiev as well as the chief antagonist of the notorious corruption in Ukraine’s government. In early 2016, he threatened to withhold $1 billion in American loan guarantees if Ukraine’s top prosecutor was not dismissed after accusations that he had ignored rampant corruption.

Mr. Biden succeeded; the prosecutor general was voted out office. And Hunter Biden had an interest in the outcome: The owner of the energy company whose board he sat on had been in the sights of the fired prosecutor general.

The former vice president accused Mr. Trump in a statement of using the power of the United States to extract “a political favor.” Mr. Biden called for the president to release the transcript of his call with Mr. Zelensky and said that if the reports about it proved true, “there was no bottom to President Trump’s willingness to abuse his power and abase our country.”

He also said the allegations that he or his son committed wrongdoing in Ukraine were baseless. “Not one single outlet has given any credibility to his assertion,” Mr. Biden told reporters on Friday after a campaign event in Cedar Rapids, Iowa.

Controversy over the Trump administration’s Ukraine policy has swirled for weeks but was confined mostly to foreign policy experts. The revelations about the whistle-blower complaint plunged the issue into the center of the political debate.

Congress has still not seen the whistle-blower’s allegation. Although the inspector general for the intelligence community, Michael Atkinson, has sought to provide it, the acting director of national intelligence, Joseph Maguire, has blocked him in a dispute over legal requirements.

Mr. Maguire and his general counsel decided against providing the complaint to Congress after consulting with Pat A. Cipollone, the White House counsel, according to a person familiar with the move.

Mounting evidence that the White House was involved in the effort to withhold the complaint from lawmakers has stirred anger on Capitol Hill. Speaker Nancy Pelosi accused Mr. Maguire of violating the law.

“If the president has done what has been alleged, then he is stepping into a dangerous minefield with serious repercussions for his administration and our democracy,” she added in a statement.

Republicans were largely silent about Mr. Trump’s calls for a foreign investigation of his political rival. Their apparent desire to avoid criticizing the president during a political crisis stood in contrast to the criticism from Republicans, including Senator Rob Portman of Ohio, after the administration froze aid to Ukraine.

The administration, critics said, has struggled to explain the move, which has convinced some Democrats that it was part of an effort bring about a Biden investigation.

“They have no shame,” said Michael Carpenter, a former aide to Mr. Biden and expert on Ukraine. He added: “They released the assistance in mid-September after the bipartisan uproar over the freeze — and under pressure from the House investigations. But strikingly, the administration never articulated why the assistance was frozen in the first place.”

Mr. Giuliani has spearheaded a push for a Biden inquiry. He met with Mr. Zelensky’s emissaries this summer in hopes of encouraging his government to pursue investigations into the family as well as whether Ukrainian officials took steps during the 2016 election to damage Mr. Trump’s campaign.

Mr. Giuliani has said he was acting on his own, though his comments on Thursday seemed to draw a closer connection to Mr. Trump. “A President telling a Pres-elect of a well known corrupt country he better investigate corruption that affects US is doing his job,” Mr. Giuliani tweeted shortly after an appearance on CNN, where he first denied, then admitted, asking the government in Kiev to investigate the Bidens.

Although they agreed to meet with Mr. Giuliani, the Ukranians have so far refused to open the investigations. But there is little doubt the pressure from Mr. Trump is causing stress on the new government, according to a former Ukranian official.

Since 2014, Ukraine has been under attack by Russia and its proxy, a fight that has become a grinding conflict that has made it difficult for Kiev to continue its overhaul efforts and work to become more integrated with Europe and the West.

But now Ukraine also finds itself potentially at odds with the leader of its most critical partner, the United States, and at the center of a political battle in Washington.

Mr. Trump and Mr. Zelensky will meet next week on the sidelines of the United Nations General Assembly in New York, a senior administration official confirmed after Mr. Zelensky’s office announced the meeting on Friday. But the administration has put off any commitment for a White House meeting, which Mr. Zelensky views as critical for the relationship.