President Trump’s approach to migration might seem unusual, but it follows a model pioneered by the European Union and Australia — though they may not have pursued it with Mr. Trump’s bombast.

Like Mr. Trump’s policies, defined by child-filled detention camps and his extraordinary move to ban nearly all asylum claims at the southern border, this model relies on two strategies to keep migrants and refugees from reaching the border at all:

1) Make the journey so daunting that they will not even attempt it.

2) Enlist poorer countries to detain or expel those who do anyway.

That approach, which Europe and Australia have taken to extremes beyond many of Mr. Trump’s policies, was meant to curb record migrant arrivals and the white backlash to them that was upending Western politics. Those arrivals have since declined, and populist revolts cooled.

But the lessons of Europe and Australia’s experience may not be so straightforward.

Strategies to deter or block migrants, research has found, may temporarily reduce arrivals. Over the long term, however, they may simply push migrants to try even more dangerous routes. They may also end up requiring governments to take ever more extreme measures to shut down each new round of arrivals.

“The costs are becoming higher and higher and higher, and there’s no real proof that it works,” said Thomas Gammeltoft-Hansen, a Danish scholar who is co-author of an authoritative study on deterrence in immigration.

Those costs include concessions to countries tasked with keeping migrants away — Turkey, Sudan and Libya for Europe; a network of island nations for Australia. Mr. Trump is now pushing Mexico and Guatemala to do the same.

They extend beyond money. Europe is subjugating an ever-growing share of its foreign policy and trade agendas to the appeasement of Turkey and Libya’s authoritarian leaders. Australia’s immigration policies increasingly deter even high-skilled workers.

Mr. Gammeltoft-Hansen said he had seen the same pattern play out in Europe for years: The bloc escalates harsh policies to deter migrants. It works for a while. Refugees find new tactics. And then the cycle would repeat.

“Very few states can say that the strategies they’re pursuing are overall effective,” he said, and for one simple reason: “Because you haven’t fixed the underlying problem.”

The European Union has not so much ended the migrant crisis as relocated it. It has diverted hundreds of thousands of people to poorer countries that have proven neither able nor willing to bear that burden indefinitely — creating the conditions for more crises.

Europe dressed up its policies in the language of regional stability and human rights, as has Australia. Now that Mr. Trump is using overt hostility to immigration and appeals to racial resentment to explain the same approach, it may make the costs and trade-offs of those policies more difficult to ignore. 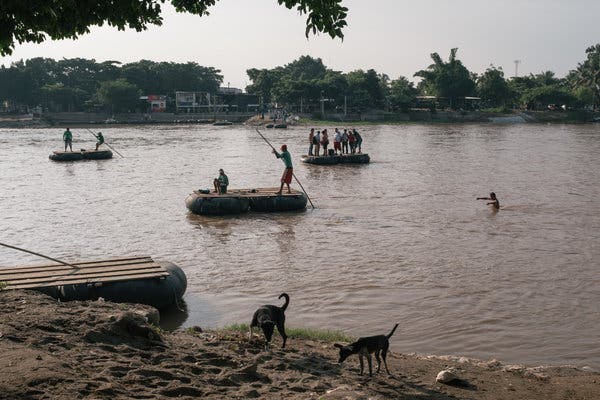 The immigration strategy increasingly common across Western governments — and the reasons many experts consider it far less effective than it appears on the surface — can be seen in the story of two migrant boats that departed Libya’s coast for Europe earlier this year.

The first boat capsized early in its journey across the Mediterranean, killing all but three of the 120 passengers. Under the central premise of European immigration policy, that should have deterred more migrants from attempting to cross.

European policymakers didn’t set out to capsize boats. Their goal was to make the journey so dangerous — by curtailing search-and-rescue missions, restricting aid groups, even closing their ports to emergency rescue vessels — that migrants would be dissuaded from setting out in the first place.

And yet just one week later, another boat set out from Libya’s coast, its passengers undeterred.

This was not unusual.

A 2016 study found that physical barriers to migration in Europe and the United States had not prevented crossings. Instead, it said, they had produced “an increase in the number of deaths” by pushing migration into “ever more dangerous paths.”

The second boat was intercepted by Libya’s coast guard, as part of a European Union deal granting its government sweeping concessions. The 144 on board, including children and pregnant women, were returned to Libya and locked in warehouses so squalid that they, too — in theory, anyway — should have scared people off from trying the sea crossing.

“No amount of preparation can actually prepare you for standing inside the detention center and seeing the sea of faces huddled in a dark room,” said Sam Turner, the head of mission for Doctors Without Borders in Libya. “It’s really harrowing.”

Detainees told Mr. Turner that the conditions had come as no surprise, and it seems clear they were no deterrent. Fewer than 1 percent of the half-million-plus refugees and migrants in Libya are held in such centers. Among the rest, Mr. Turner has found, the warehouses are seen as a reason to try all the harder to cross.

“We are a bit naïve in this,” Mr. Turner said. “Policies supposed to act as deterrence factors are actually acting as push factors.”

While the Trump administration’s detention centers have provoked major controversies in the United States, the camps created under European and Australian policies have met with far less backlash.

If Mr. Trump’s experience is anything like Europe’s, he may find that persuading Mexico or Guatemala to detain refugees on the United States’ behalf will drastically worsen conditions for refugees, but alleviate much of the backlash from Americans.

Mr. Gammeltoft-Hansen, however, said he had seen many such deals come and go. They rarely survived long. Host countries lost interest as refugee camps overflowed and aid dried up, or lost the ability to uphold their end of the deal when they encountered political crises of their own.

It was a cycle.

The European Union would scramble to cut a new deal. Each would cost European governments more than the last, to overcome skepticism from poor countries that had seen the ever-mounting risks of becoming Europe’s refugee camp. And, each time, the number of people accumulating in intermediary countries would grow.

The buildup meant that even a single dam break in the system could cause a sudden rush in arrivals. The 2015 migrant crisis, for example, was partly the result of a single short-lived break in Libya, one of Europe’s most reliable bulwarks against migrants until its government collapsed.

Since then, pushing the burdens of migration onto poorer countries has grown only more common.

“The biggest thing that I think is changing is the ability of governments to essentially put the responsibility of refugee hosting on the less powerful,” said Stephanie Schwartz, a migration scholar at the University of Pennsylvania. “It’s become really brazen.”

Migrants rescued by a German-flagged rescue ship aboard a patrol boat as they are brought into Malta.CreditMatthew Mirabelli/Agence France-Presse — Getty Images

As policies to deter migration escalate, each new measure temporarily slows arrivals without changing the fundamental calculus made by anyone considering setting out for a new country.

Mr. Turner, the Doctors Without Borders aid worker, noted that as risky as the journey may be, many refugees already face grave dangers and hardships at home that drive them to flee in the first place. Even the risk of death — a chance of one in 20 for a Mediterranean crossing, some data suggests — is not always enough to overcome the forces that drive someone to seek asylum.

A quirk of European immigration misled many Westerners into believing that deterrence works, Mr. Gammeltoft-Hansen said.

For years, European countries have imposed harsh measures to scare would-be migrants into settling in another European country. These did not reduce overall arrivals to Europe, Mr. Gammeltoft-Hansen said. It merely moved them around.

But it has led Western governments to chip away at the global rights and practices governing modern immigration.

Mr. Trump is unusual only in that he is openly and deliberately driving to upend that system. It is impossible to say for sure whether this could set off a backlash against such policies — or grant more governments license to do the same.