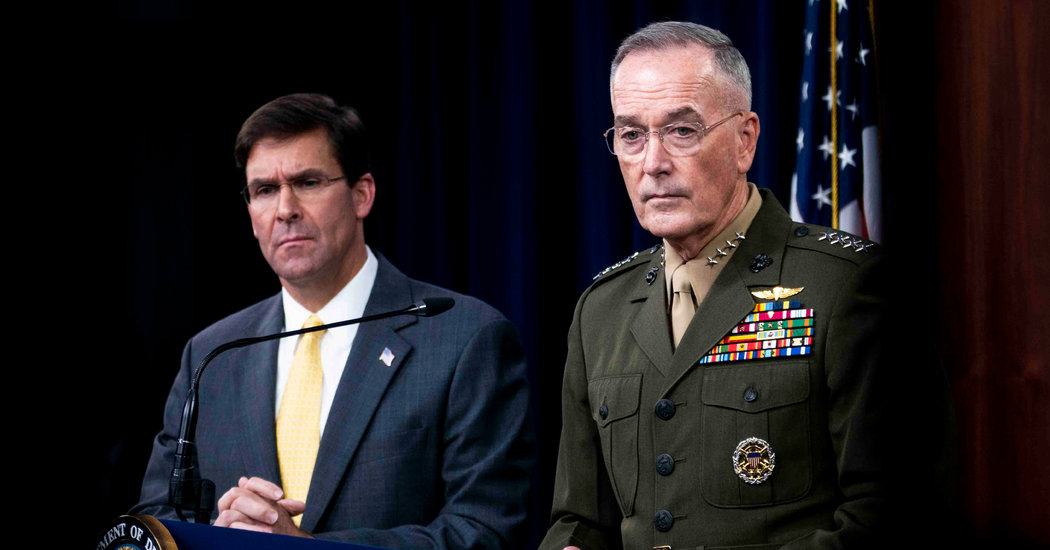 WASHINGTON — Senior national security officials from across the government are scheduled to meet Thursday to refine a list of potential targets to strike in Iran, should President Trump order a military retaliation for missile and drone attacks on Saudi Arabian oil fields last weekend, officials said.

Defense Secretary Mark T. Esper and Gen. Joseph F. Dunford Jr., the chairman of the Joint Chiefs of Staff, are to present the updated options to Mr. Trump at a National Security Council meeting scheduled for Friday, a senior American official said.

In advance of being presented with the newest set of options, Mr. Trump has sent different signals on his intentions. He has threatened to order “the ultimate option” of a strike on Iran to punish the nation for its behavior, but also has made clear his continued opposition to ordering the United States into another war in the Middle East.

The Pentagon is advocating military strikes that one senior official described as at the lower end of options. The official said that any retaliation could focus on more clandestine operations — actions that military planners predict would not prompt an escalation by Iran.

These kinds of targets could include the sites where Iran launches cruise missiles and drones, and where the weaponry is stored. Under this scenario, the military option would include a diplomatic outreach campaign at the United Nations General Assembly in New York next week to muster support for the additional sanctions that Mr. Trump has ordered and other nonmilitary steps. Mr. Trump has said new sanctions against Iran will be put in place. A range of covert cyberoperations is also being discussed.

[A military strike against Iran would result in “an all-out war,” Iran’s foreign minister said Thursday.]

It remains unclear, though, whether the United States and Saudi Arabia could muster strong support at the United Nations, since the Saudis have been criticized for waging a war in Yemen that has caused civilian casualties and since Mr. Trump has faced strong criticism for pulling the United States out of a multilateral nuclear deal with Iran.

But the senior American official, who spoke on the condition of anonymity to discuss internal deliberations, warned that Mr. Trump would also be presented with other options that are stronger, options that would require dispatching more forces to the Persian Gulf region.

The official offered no details on those targets, but presumably they could include Iranian oil facilities or targets involving Iran’s Islamic Revolutionary Guards Corps. Mr. Trump’s contradictory statements on Wednesday left senior Defense Department and military officers guessing about which course of action the president would choose.

Several issues might delay any immediate military action, officials said. First, Saudi Arabia is said to fear that any military response could rapidly escalate and lead to further attacks against the kingdom and its vulnerable oil facilities.

Another issue is that American military forensic specialists have only arrived in the past couple of days at the site of the attacks in Saudi Arabia. Their analysis of circuit boards recovered from one of the cruise missiles — which could provide valuable clues about the missile’s trajectory and flight path — is still underway. That information could be important to making a case as to who is responsible for the attacks.