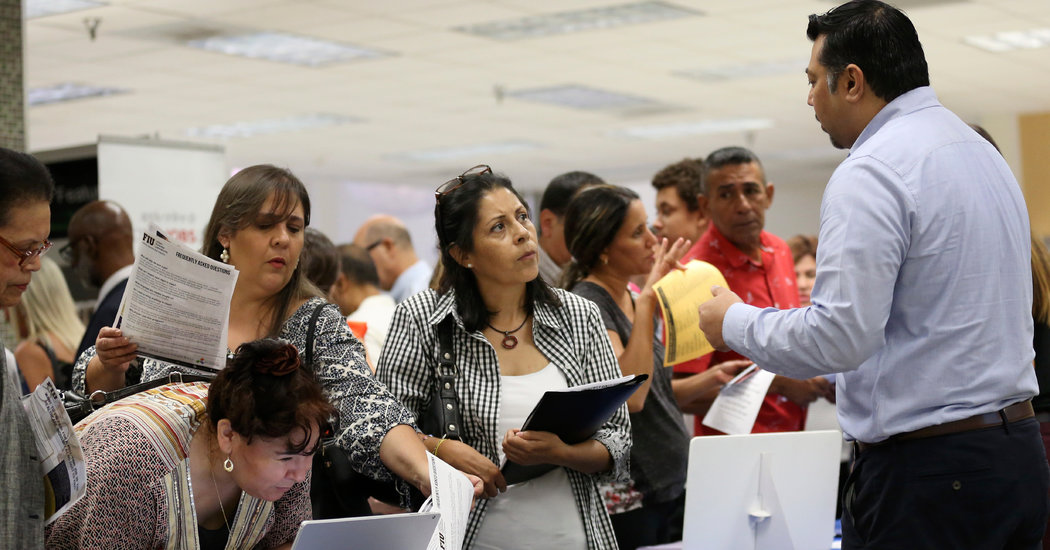 The Labor Department will release the latest hiring and unemployment figures for September at 8:30 a.m. Eastern time. The monthly report provides one of the better snapshots of the state of the American economy. Here’s what to watch for:

The Labor Department’s monthly report has taken on added significance after a week of disappointing economic news and stock market skids.

Last year, an average of 223,000 jobs were created each month, thanks in part to the temporary pick-me-up delivered by tax cuts and increased government spending. This year, the monthly average through August has been 159,000. That falloff was expected now that the recovery has passed its 10-year anniversary and there are more job postings than job seekers. The unemployment rate has remained below 4 percent for the last seven months. And many Americans who had dropped out of the labor force — because they were too discouraged to look, or couldn’t find sufficiently attractive offers — have rejoined.

Job growth of less than 100,000 would set off some alarms. But unusually meager payroll gains one month can be reversed by a blockbuster increase the next. What matters is the longer-run pattern.

“Numbers below 100,000 on a sustained basis would worry me,” said Ben Herzon, an executive director at Macroeconomic Advisers, “but numbers in the low 100,000s would not be cause for concern.”

The September reading from the Labor Department is the last monthly report to be released before Federal Reserve officials meet on Oct. 29 and 30.

Because policymakers have split on the need for another rate cut, the employment report could be more pivotal in the decision than usual. Jerome H. Powell, the Fed chair, has noted that the labor market and consumer spending are the two of the strongest parts of the economy.

On Wall Street, expectations that the central bank would pare borrowing costs for a third time this month has been building this week as news about slowing growth rolled in. A weak report would encourage policymakers who favor lowering benchmark interest rates again.

The United Auto Workers’ strike against General Motors has shut down 34 factories in the United States for more than two weeks. But the walkout by 49,000 workers will not be reflected in the government’s monthly report because the strike started after the government surveyed employers.

In August, the job totals were elevated by the hiring of 25,000 temporary census workers. Mr. Herzon estimates that Census Bureau hires in September were half that number. And those gains will be reversed after a few months.

President Trump has repeatedly placed the manufacturing sector at the center of his economic strategy. Nonetheless, that sector is suffering the most from prolonged trade tensions. Companies in the business of making goods — as opposed to those that deliver services, like hospitals and restaurants — are much more dependent on sales to other countries and supply chains that wend around the globe.

Last spring, manufacturers were adding as many as 25,000 jobs a month. In recent months, the average had been closer to 3,000.

News this week that manufacturing activity in the United States fell for the second month in a row set off a stock-market tumble.

With 11.6 million workers, the sector accounts for about 11 percent of the country’s output, but it tends to loom larger in policy debates. Carl Tannenbaum, chief economist at Northern Trust, noted that a key measure of manufacturing activity reflected in a survey by the Institute for Supply Management “has a better track record of being a leading indicator of downturns, so I do think there is something to the hold that it has on confidence.”

A decline in manufacturing hires is likely to fuel anxieties about the economy.

Sizing Up the Labor Market

Mr. Powell’s pride in the labor market’s performance is well grounded. The jobless rate has skimmed along near half-century lows. Sidelined workers have been lured from living rooms and classrooms back into the workplace. New applications for unemployment insurance have not risen noticeably in recent months.

“One of the best stories about labor market in the last two years is that the job market has done so well, it is now reaching into further corners and providing opportunities to those who had not enjoyed them,” Mr. Tannenbaum said. “This is the way the economy is supposed to work.”

The tight labor market as well as minimum wage increases in several states and cities have helped bulk up paychecks for workers at the lowest end of the salary spectrum. And it means that when some workers, say, in retail lose a job, they have an easier time finding another.

The most highly sought after workers, though, are often the most highly skilled and the most highly paid — a phenomenon that tends to exacerbate income inequality. So keep an eye on not just the total number of payroll gains, but also on what kinds of jobs are being created.

Keep an eye on whether restaurateurs are hiring. A drop in leisure and hospitality job gains could indicate that consumers are not feeling as free to spend.

“Dining out is the single most highly discretionary category,” said Ellen Zentner, chief United States economist for Morgan Stanley. “It responds in kneejerk fashion when people are uncertain about job security and income.”