U.S.-China Trade Talks to Resume, but New Tariffs Could Complicate Them 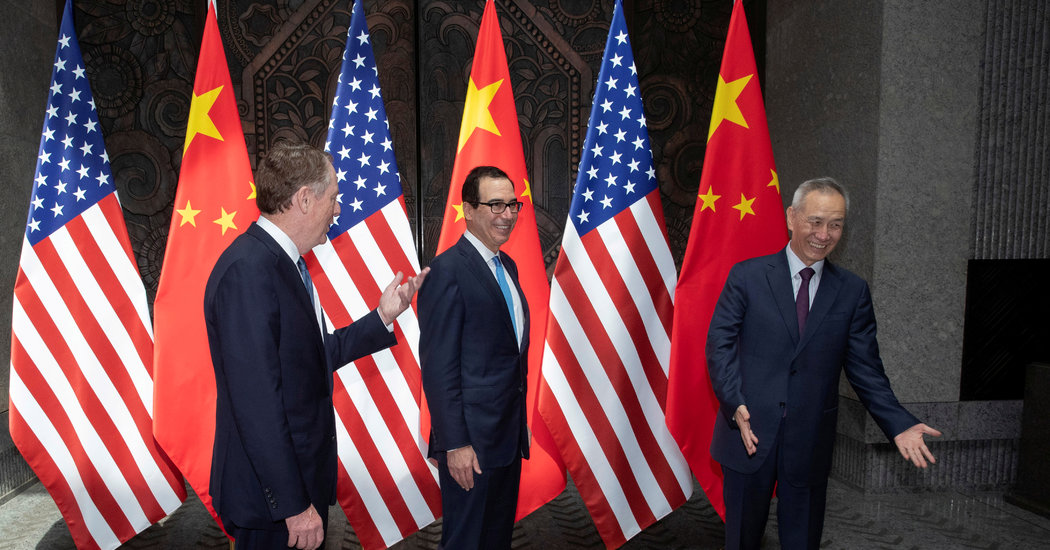 SHANGHAI — The United States and China will hold trade talks in Washington early next month, officials from both countries said on Thursday, but new tariffs will make it difficult to find a way to end their economic clash.

If held as scheduled, the talks would take place after new American tariffs kick in, which could make it difficult for the two sides to reach a deal. President Trump has said he would raise tariffs to 30 percent from the current 25 percent on $250 billion in Chinese goods. Those tariffs cover everything from cars to aircraft parts.

On Sunday, Washington began charging a 15 percent tax on more than $100 billion worth of Chinese imports. Beijing retaliated with its own increased tariffs. Both countries plan to impose still more tariffs in December, barring a breakthrough in talks.

Already, pessimism had been growing on both sides of the Pacific Ocean about the possibility of a trade deal before the United States presidential elections next year. The mounting tariffs have rattled global markets and set off fears over world economic growth.

Businesses in both the United States and China have begun to express concern about a trade war that has dragged on for more than a year. American manufacturing activity contracted for the first time in three years because of slowing export orders amid the trade dispute, data showed on Wednesday.

Chinese factory activity, meanwhile, contracted for three months this summer before ticking back up slightly in data released this week. Its manufacturing sector has suffered layoffs and factory shutdowns from the trade war and as its economy grows at its slowest pace in three decades.

“When I speak to C.E.O.s of leading Chinese and global companies, everyone is fretting about what the latest escalations mean for their businesses in the short term, and more worrisome, for their long-term strategy and investment plans,” said Fred Hu, founder of the investment firm Primavera Capital Group and former head of Goldman Sachs’s greater China business.

The two sides show little sign of backing down, however. Mr. Trump has gambled that China’s softening economy will put pressure on Beijing’s leaders to back down. Speaking with reporters on Wednesday, Mr. Trump cited the country’s slowdown, which he called, inaccurately, “the worst year they’ve had in 57 years.”

For their part, China’s leaders believe their own efforts to quell China’s dependence on debt are mostly responsible for the slowdown, and that they could reverse course if needed to bolster growth.

Next month’s talks would be the 13th time that senior-level trade negotiators have met. American negotiators traveled to Shanghai in July to meet briefly with their Chinese counterparts and left with an agreement to meet again in Washington on Sept. 1.

But the plans were disrupted when, one day after negotiators returned home, Mr. Trump said the United States would impose a 10 percent tariff on $300 billion worth of Chinese goods on Sept. 1, once again escalating trade tensions.