The American economy turned in a weaker annual performance last year than in 2018, held back by developments that set the stage for slower growth to come.

Gross domestic product — which measures the value of goods and services produced inside the United States — grew at a 2.1 percent annual rate between October and December, the same as the previous three months, according to preliminary data released by the Commerce Department on Thursday.

A shrinking trade deficit resulting from a steep falloff in imports helped bolster the fourth quarter’s reading, as did a revived housing sector. Consumer spending expanded, but at a slower pace than during the summer.

“In the bigger picture on 2019, growth was solid,” said Matthew Luzzetti, chief United States economist for Deutsche Bank Securities. But he said a key element, domestic demand, disappointed, growing by 2.2 percent as consumers and businesses pulled back on spending. That was the weakest figure since 1.8 percent in 2013.

In the second half of 2017 and in some of 2018, the annual growth rate surged past 3 percent, helped by hearty tax cuts and government spending. And it continued to sail ahead at the start of last year, reaching 3.1 percent between January and March.

But the stimulus effect faded, and that growth level now looks more like an aberration. The economy has not expanded by 3 percent or more in a full calendar year since 2005.

The slowdown, in part, reflects a maturing labor market, where the official jobless rate creeps along at half-century lows as the expansion heads toward its 11th anniversary and a hefty chunk of the population ages into retirement.

Federal Reserve officials have maintained a wait-and-see approach on the economy, and on Wednesday left benchmark interest rates unchanged. The inflation rate has remained stubbornly below the Fed’s target of 2 percent.

One measure of inflation reported on Thursday, the personal consumption expenditure index, was unexpectedly weak. Excluding the volatile categories of food and energy, the index increased just 1.3 percent on an annual basis.

“That was the biggest surprise in the report,” Mr. Luzzetti of Deutsche Bank said. Jerome H. Powell, the Fed chair, has “become increasingly worried about persistently low inflation and feeding into lower inflation expectations,” he said, “so these data do put some additional pressure on the Fed around the middle of the year when they’re doing this policy review.”

The data has political ramifications.

The economy’s resilience has been one of the Trump’s administration’s most notable accomplishments, and is sure to loom large as the 2020 presidential campaign gains momentum.

President Trump has maintained an enthusiastic bullishness on the economy even though the annual growth rate has fallen short of his promises of 3 or 4 percent.

At the World Economic Forum in Davos, Switzerland, this month, he declared that “the United States is in the midst of an economic boom the likes of which the world has never seen before.”

Mr. Trump has spread blame for the economic slowdown, reserving his harshest criticism for the Federal Reserve Bank, which raised benchmark interest rates between 2015 and 2018 before cutting rates three times last year.

“No. 1, the Fed was not good,” he said. “Had we not done the big raise on interest, I think we would have been close to 4 percent.”

The president also mentioned the six-week strike at General Motors last fall and the continuing turmoil at Boeing, the nation’s largest aerospace manufacturer and largest manufacturing exporter, after accidents involving two of its 737 Max airplanes that killed 346 people. 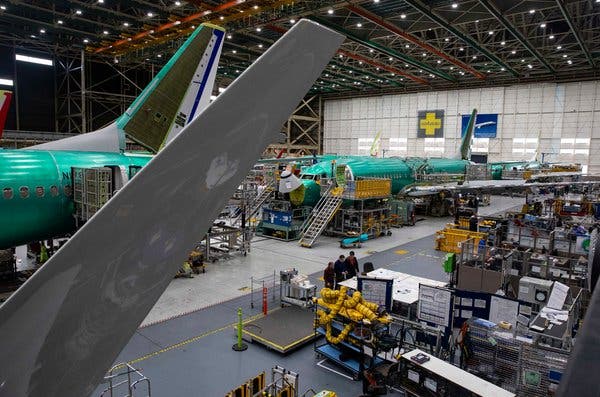 Boeing’s troubles are taking a toll.

December has usually been a strong month for Boeing, with average sales of 234 airplanes over the past five years, Ian Shepherdson, chief United States economist at Pantheon Macroeconomics, noted in a newsletter. Last month, it sold just three. Strong sales of defense aircraft after Congress raised military spending offset the decline.

Still, Boeing’s halt in 737 Max production will continue to ripple throughout the economy in the coming year. This week, one of the airplane manufacturer’s suppliers, Arconic, said it expected to lose $400 million in Boeing sales and cut jobs. Another contractor, Spirit AeroSystems Holdings, recently announced that it was eliminating 2,800 jobs this month. Hundreds of other companies are also grappling to manage the fallout.

Analysts say they expect Boeing’s disrupted production to shave half a percentage point off G.D.P. in the first three months of this year.

Is the shrinking American trade deficit a win or loss?

Imports fell sharply in September after the United States imposed tariffs on China because some American companies held off buying goods, hoping that the Trump administration might soon strike a trade deal that reduced or removed the tariffs.

As tensions with China cooled in December, imports revived, according to figures released Wednesday. And with a Phase 1 trade deal now signed, they might climb further in the months to come.

Rising imports push down G.D.P. because the measure counts only the value of goods and services produced within a country’s borders. When a nation buys more things from abroad than it sells — the definition of a trade deficit — it pushes down G.D.P.

While the deficit excluding oil steadily climbed through most of President Trump’s tenure, it had fallen sharply in recent months before December’s figures came in.

The Trump administration has made lowering the American trade deficit a goal. Economists, though, have opposed using the deficit as a scorecard: It can fall for a variety of reasons, and not all of them are good.

The deficit can fall because exports are growing, or because imports are shrinking, or both. For example, a boom in manufacturing can reduce the deficit by pushing imported products out of the American market and feeding a surge in exports — the outcome the Trump administration wanted to engineer.

“There is no evidence of those broader positive developments,” said Brad W. Setser, a senior fellow in international economics at the Council on Foreign Relations. “There is no growth in exports, and manufacturing is weak. So to the extent that tariffs have succeeded in bringing the trade deficit down, they have done so largely by reducing U.S. demand, not by raising U.S. production.”

Many variables cloud the outlook.

Businesses are hesitant to invest when they are unsure of what’s ahead.

According to Ben Herzon, executive director of United States economics at Macroeconomic Advisers, a forecasting firm, research shows that the “level of investment spending recently has been about $100 billion lower that it would have had there been no uncertainty about trade policy.”

That suggests there is room for more investment if trade policy settles.

Tensions with China have eased with the signing of the Phase 1 pact. And this week, Mr. Trump signed the new North American trade agreement with Canada and Mexico into law. But tariffs remain on two-thirds of Chinese imports. At the same time, trade frictions with Europe over tariffs, airplane subsidies, digital taxes and the World Trade Organization have ratcheted up.

Also unsettling is the outbreak in China and spread of a mysterious and deadly virus that has the potential to rattle investors, and slow growth in Asia.

On the domestic front, Mr. Trump’s impeachment trial in the Senate and the coming presidential election add another large dose of political uncertainty.

No matter who becomes the Democrats’ nominee, “we’re likely to have two candidates with very different views on tax, regulatory and trade policy,” said Mr. Luzzetti of Deutsche Bank. “Businesses don’t know which direction that’s going to go in, so they may hold back on spending projects.”

Mr. Luzzetti said the volatility in the data because of trade and Boeing would make it hard to gauge the underlying growth dynamics until midyear.

Although wage growth and business investment have slacked off, consumers’ confidence in the economy has been unshaken. Optimism about the ease of finding a job helped fuel the rise in its most recent monthly measure of confidence, the Conference Board, a business research group, reported this week.

The growth, though, is not spread evenly. “The manufacturing and service sectors are telling two slightly different stories,” said Emily Weis, macro strategist at State Street Corporation, a large financial institution based in Boston.

While spending on services has remained strong, manufacturing in the United States has yet to revive, despite signs that it has stabilized abroad.

December was the fifth month in a row that the sector had declined. One large company, 3M, which makes Post-it notes and a wide range of other consumer and office products, announced this week that it was laying off 1,500 people globally.

“Manufacturing has generally underwhelmed in the U.S.,” Ms. Weis said.

The Commerce Department will revise the fourth-quarter results twice, as more data comes in.